In this series, Red River Paper Pro Ron Wolfe covers some unique (and out of the way) photo locations in his home state of New Mexico.

Would you expect to find a duck-billed dinosaur in the desert?  Well, welcome to the Bisti Wilderness. The barren and seemingly lifeless landscape found today is vastly different than the swampy lush vegetation in which huge dinosaurs roamed millions of years ago.   Bisti takes you back 70 million years, when it was a coastal rain forest of biological opulence.

Cypress-like conifers, palms and other plants towered 100 to 200 feet over the jungle floor..  Dinosaurs such as fearsome tyrannosaurus rex ruled the animal kingdom on land.  Smaller reptiles populated the undergrowth. Mammals, about the size of squirrels, somewhat like possums, struggled to survive.

Crocodiles held domain over the waters of the marshes and ponds and in channels of huge and sluggish rivers. A profusion of other life forms, e.g.; salamanders, shellfish, rays, frogs and turtles, filled their niches in this dim watery world.

As the inland seas retreated, the coastal swamps and succeeding forest parks and meadowlands of northwest New Mexico disappeared under the river flood plains. Within the sediments lie the buried remains of animal life that lived here. Ancient animal life is represented by isolated teeth and bones of fish, turtles, lizards, mammals, and dinosaurs, who dominated other life forms.

The Bisti rain forest may have represented a community of plant and animal life forms more complex and diverse than any other kind of land-based ecosystem on earth. It was a world far more exotic than anything that could be imagined by Hollywood.

This 3946 acre area is known as the Bisti Wilderness, designated in the San Juan Basin Wilderness Protection Act of 1984.  Bisti, translated from the Navajo language, means “badlands” and is commonly pronounced (Bis-tie) in English and (Bis-ta-hi) in the Navajo language.

At Bisti, you will discover a geology textbook, and for photographers, a magical place to visit.  Bisti attracts a total of only 2000 visitors for an entire year  The Bureau of Land Management administers Bisti and maintains it  as a wilderness. The BLM requires no permits. It has developed no trails, posted no wilderness area signs, provided no water, built no facilities save the small undeveloped parking area.

There are no signposts pointing the way to Bisti from any nearby towns, but the usual approach route from NM 371, south from Farmington, the largest town in the Four Corners region.  From Farmington head south through open prairie land on the east side of the great Navajo Indian Reservation. After 36 miles, a historical marker records the history of the area and the Bisti Trading Post, now derelict,  The main entrance to the badlands is 6.5 miles further south. Bisti is the smaller component of a 15 mile wide wilderness area that includes the much larger De-Na-Zin Wilderness, equally colorful and even more remote, but partially covered with vegetation.

Water and wind carved the sandstone into the exquisite and ever chang-ing shapes we see today, constantly creating then destroying these masterworks. They sculpt those geologic forms called “hoodoos,” which in the Bisti are sand-stone pedestals capped by harder boulders or shale plates.  Meanwhile, coal deposits ignited and burned underground, searing the shale, turning it rust red. The shale, now exposed, adds color to the Bisti.

The Bisti/De-Na-Zin Wilderness is about 30 miles (as the raven flies) south of Farmington, NM. To reach the Bisti access off NM 371, go 36½ miles from the San Juan River crossing, take a left turn on NCM (non-county-maintained) Road 7297 and follow a gravel road for approximately 2 miles to the Bisti parking lot.

Hotels: The nearest large towns with hotels close to the Bisti Badlands are Bloomfield (48 miles), Farmington (35 miles) and Grants (102 miles).

The Bisti/De-Na-Zin Wilderness is about 30 miles (as the raven flies) south of Farmington, NM. To reach the Bisti access off NM 371, go 36 miles from the San Juan River crossing, take a left turn on NCM Road 7297 and follow a gravel road for approximately 2 miles to the Bisti parking lot. This turn is about 46 miles north of Crownpoint, NM, just past the crest of the hill after crossing the Don Gleason Bridge over De-Na-Zin Wash. The De-Na-Zin parking lot and access is off County Road 7500, which connects US Highway 550 (at Huerfano Trading Post) with NM 371, 8 miles south of the Bisti access exit. It is important to note that County Road 7500 can become impassible in bad weather. Check weather conditions in the area prior to visiting. Roads and wilderness terrain may become slick or impassible in wet weather.

Part of the above via recreation.gov and blm.gov

Chaco Culture National Historical Park hosts the densest and most exceptional concentration of pueblos in the American Southwest.  The park is located in northwestern New Mexico, between Albuquerque and Farmington, in a remote canyon cut by the Chaco Wash.  Containing the most sweeping collection of ancient ruins north of Mexico, the park preserves one of the United States’ most important precolumbian cultural and historic areas.

From AD 850 to 1250, Chaco was thought to be a hub of ceremony, trade, and administration for the  Four Corners area–unlike anything before or since, that still awes and inspires a thousand years later. The Chacoan people combined many elements: pre-planned architectural designs, astronomical alignments, geometry, landscaping, and engineering to create an ancient urban center of spectacular public architecture.

Chacoans quarried sandstone blocks and hauled timber from great distances, assembling 15 major complexes which remained the largest buildings in North America until the 19th century.  Many buildings may have been aligned to capture the solar and lunar cycles, requiring generations of astronomical observations and possibly centuries of carefully coordinated construction. Climate change is thought to have led to the eventual abandonment of the canyon, beginning with a 50-year drought in 1130.

Chaco Canyon is located in northwestern New Mexico. The preferred and recommended access route to the park is from the north, via US 550 (formerly NM 44) and County Road (CR) 7900, and CR 7950.

The park is open every day from 7:00 a.m. to sunset. The Visitor Center is open from 8:00 a.m. to 5:00 p.m. The park visitor center is closed on Thanksgiving, Christmas Day, and New Year’s Day, in observance of these holidays, but the park’s roads, sites, trails and campground will remain open.

In addition to landscape and ruins photography, the park also offers a Night Sky Program, great for star trail photography.

Chaco’s Night Sky Initiative: Since 1991, Chaco Culture NHP has offered astronomy in its public interpretive programs. Programs emphasize the practices of the Chacoan people a thousand years ago, as well as modern approaches to viewing the same night sky they viewed–in a remote environment with clear, dark skies, and free from urban light pollution.

Some of the above courtesy of the NPS.gov website.

Gila Cliff Dwellings National Monument, in New Mexico, was the former home of the Mogollon people who lived there over 700 years ago.   Today, one can photograph the ruins of cliff dwellings, petroglyphs, and much more; which are contained within the National Monument.   The Gila Cliff Dwellings are contained within the rugged Gila Wilderness (the nation’s first wilderness area) which offers many miles of hiking and scenic beauty. Information about the monuments can be found from the National Park Service and at WikiPedia.  Lodging information for the area is here.

Take State Highway 15 north from Silver City. Although the distance from Silver City is only 44 miles, the travel time is approximately two hours due to twisting and winding mountain terrain. 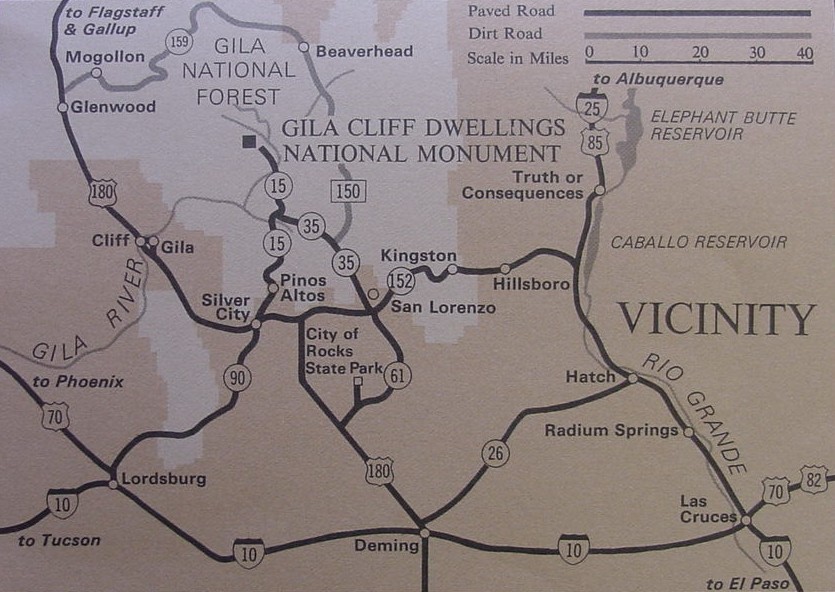 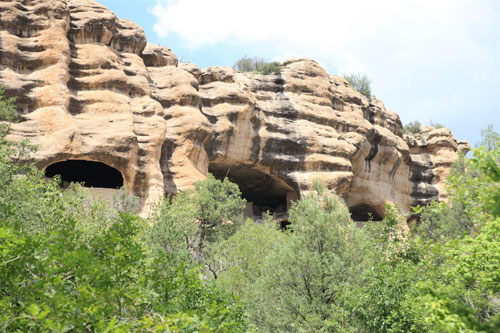 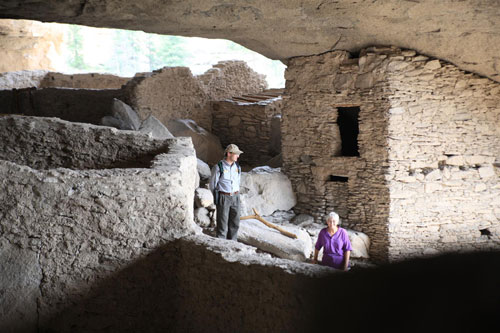 White Sands National Monument, in New Mexico, can make very interesting photographic opportunities any time of year, but especially during the annual White Sands Hot- Air Balloon Festival, held in September each year, and during full moon occurrences.   Many people participate in the balloon festival which features about 50 hot air balloons launched at dawn from the heart of the dunes.  The resulting photographic opportunities can be very dramatic with the nearby mountains and white sands as backdrop.  Learn more about White Sands here and from the National Park Service here. The NPS also has information on lodging while you’re staying in White Sands. 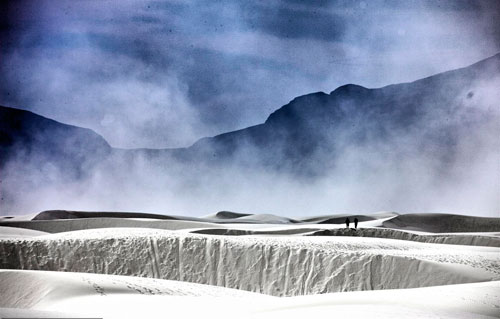 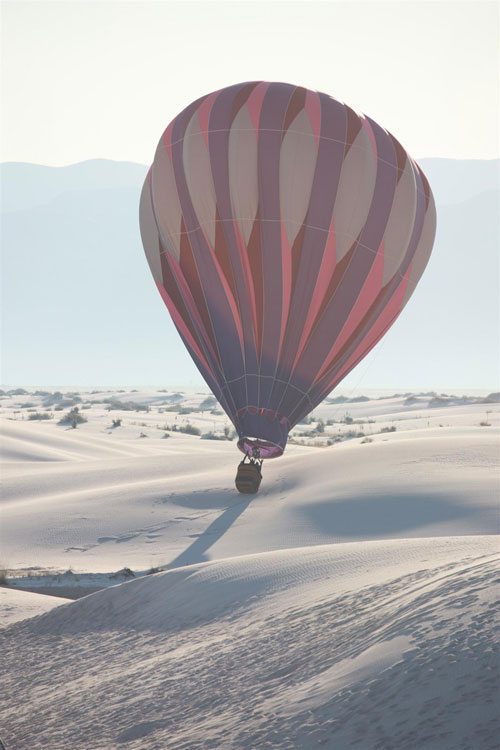 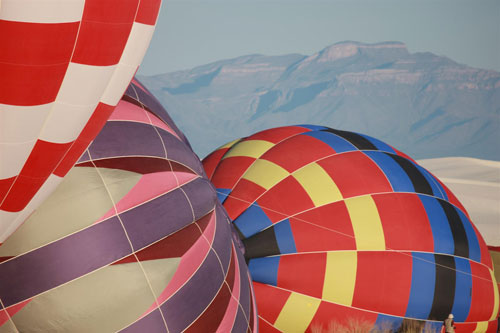 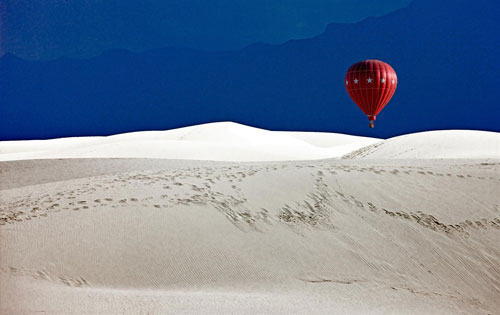 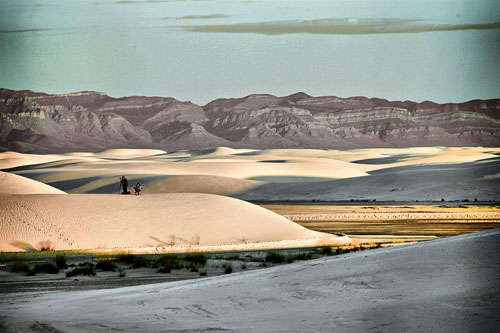