Laurie Excell is a photography workshop leader and accomplished nature photographer.  Her vast experience with camera equipment and shooting in virtually any environment mean you’ll learn a lot in just the short space below!

Last Tuesday’s Tech Tuesday was related to creating blur motion through the use of slow shutter speeds.  This week I’ll go the other direction and speed up my shutter speeds to illustrate stop action; in this case capturing the power of the surf…

This isn’t a case of simply dialing a wider aperture resulting in a faster shutter speed and firing away.  There are many factors that go into stopping the action.  For one, how far away is the subject?  In this case the waves were quite a ways out and I was using a wide angle lens so I didn’t need a super fast shutter speed to capture the waves sharply enough to pick up the patterns in the incoming surf.  By going to opposite of blurring the waves, we captured texture, patterns and a sense of the inexorable power of the waves as set after set roll towards shore.  The tides rise, the tides drop, and the waves continue their journey to shore, one after another… 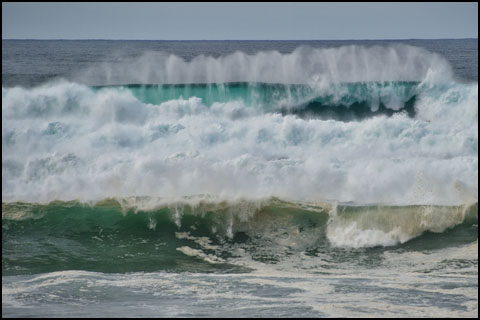 With my camera in aperture priority mode I began opening the aperture until the shutter speed seemed fast enough to capture the wave action and fired off a few shots.  Opening my aperture just a bit more and a final test shot confirmed that 1/180 of a second would sufficiently capture the waves as they pounded each other in their race to shore.  With plenty of light, I was able to keep my ISO low, reducing any noise and still have enough aperture and shutter speed variations to work with to capture the effect I was after… 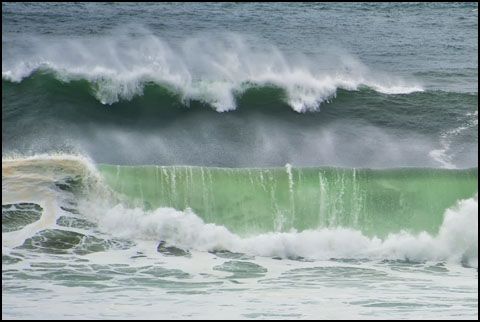 -Mid-morning, partly cloudy sky with light dancing across the waves

-Compose the scene to my liking

-Fire a test shot for exposure information, review the histogram and/or Highlight Warnings on camera’s rear lcd, establish a “base” exposure

-Adjust ISO and/or aperture to find the shutter speed that provides the amount of stop action desired.

-In addition to the distance and the focal length in shutter speed selection, the speed of the water will determine how fast a shutter speed is needed to stop the action to a desired effect.

-Once I have found the Aperture/Shutter Speed/ ISO combination that I like, I fire off a series of images.  With stop action I never know what interesting patterns or explosions I might capture so I shoot multiples of each composition looking to capture that perfect moment in the curl when the translucent colors literally glow as the wave crests.

-If there is not enough light to increase my shutter speed enough to capture the stop action I am looking for, I begin to increase my ISO to higher settings

*Note: These stop action techniques can be created with any moving subject.