Home » About Photographers » Life in a Bubble

Life in a Bubble

Pretty bubbles in the air.” 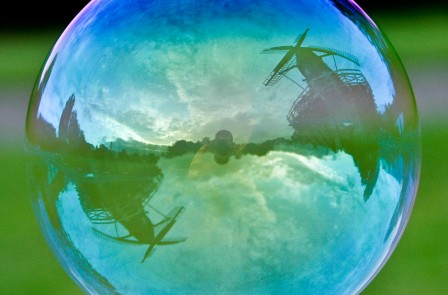 Backpacking in Ireland in 2006, Tom Storm, 32, remembers being part of the crowd at the Galway Festival when bubbles from a nearby vendor floated by him.

“I’ve always been keen on capturing reflections,” he recalls, “and I saw some in those bubbles.” He snapped off a few shots and thought no more about it until he returned from his trip and started to post-process his images.

“There was a whole world in focus within the reflections, and from that point on, I started blowing bubbles intentionally to capture images of different places around the world and at home.”

Using a Nikon D70 at first and then graduating to a D300, Storm, now a pro, found that shooting with an 18-200mm lens gave him the most versatility to capture images at a variety of distances. “I generally shoot at about 50mm but it varies; it’s like trying to photograph a moving butterfly,” he explains.

Strong contrast is a must. “When I shot Times Square in New York I arrived around eight in the morning and caught the buildings as the sun was coming down the avenues. The important thing is a dark background and a bright subject.” 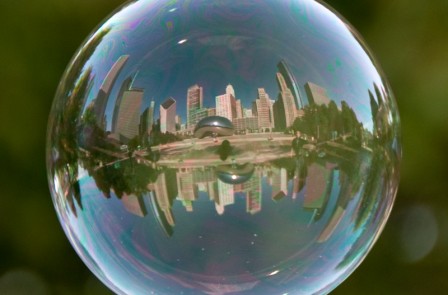 And then there are bubble blowing techniques and accident avoidance to be mastered. “Taking pictures and blowing the bubbles is next to impossible so I always have a partner with me,” says Storm. He’s had good and bad bubble blowers; evidently not everyone has the mojo. “Perhaps it’s breath control,” he muses, “or maybe it’s just an innate talent.”

The bubble blower also doubles as a safety officer. “It’s very hard not to walk into people and other obstacles when you’re chasing down a floating bubble with your eye glued to the viewfinder. He recalls that shooting in Times Square was a toughie and his helper kept him from getting mashed by passing cars and buses.

There are also elements of meteorology to consider. Whenever Storm arrives at a shooting site he blows a bunch of bubbles to see how they float. “Does the bubble rise or sink rapidly?  Does the wind take it quickly or is there time for it to linger?” He then adjusts his shooting technique accordingly. “Flexibility and adaptability is the key,” he says. “Sometimes I never get a picture due to high winds or other inclement weather.”

Storm’s own reflection in the bubble can be noticeable or not, depending on where it falls. “I consider it a nice chronicle to be in my own images,” he says. “As a photographer, it’s rare to be in a picture. If you look closely at the images where I don’t have a prominent role, I’m still in there, albeit squashed and hidden.”

People are fascinated by Storm’s images. “The most common response I get,” he says, “is that they’ve never seen anything like it before and that makes me feel good. Isn’t that what every photographer wants to be able to share– their fresh perspective on the world?”

In the end, he says, it all comes down to practice and patience. “Awareness and a steady hand are instrumental in making these images a success.” 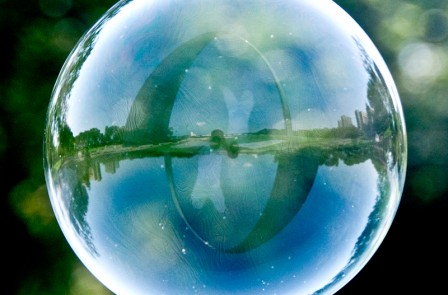 All bubble images © Tom Storm. You can see more (and read backstories about some) at Tom Storm’s web site: www.tomstorm.net

1. Use clear, not colored, bubble solutions. Kits are available at variety stores.

2. Bubbles should be about 10-inches in diameter. Smaller ones make it hard to keep reflections in focus; larger ones don’t hold their spherical shape.

3. Shoot fast– you only have about 10 seconds before the bubble bursts.

4. Carry a lens cloth to wipe off occasional bubble splatter.