You can’t beat a magnificent sunset to make you feel, as Robert Browning put it, “God’s in his heaven– All’s right with the world.”

Frequently though, all’s not right with the pictures you took. Without the salty aroma of the ocean, balmy summer breezes or the sounds of birds singing in the trees, your sunset photos can be a real letdown. While there’s no way to bring back the sensory elements, just a bit of pre-planning can give your pictures that missing zing.

If the sun’s in the picture, your camera’s light meter is going to say: “Oops, too bright, I’d better make the aperture smaller or shutter speed faster (or both) to cut down some of that light.” Result: a perfectly exposed sun (at least as much as possible) and sky colors that could be too dark.

Then again, if there’s no sun in the picture, the metering system might see the colors of the sky as too dark and tell the camera to open the aperture wider or to expose at a slower shutter speed (or both) to get what it thinks should be a good picture. Result: washed out colors that don’t seem to have the richness and saturation you remember.

To get perfect results use your camera’s Exposure Compensation feature to second-guess your camera’s choice of exposure. You can access this feature with a dedicated button on more sophisticated cameras or as a menu item on simpler ones; it overrides the camera’s normal exposure setting to deliberately under or over expose your images. Plus-sign (+) numbers make pictures lighter and minus sign (-) numbers make them darker.

Shoot the first picture at what the camera chooses. Then expose several others using plus or minus numbers (or both) depending on the scene. Among them, the right image will jump out at you– just the way you envisioned it. A few cautions: If the sun’s in the scene, be careful not to go over Plus 1– more than that may be too bright for some camera sensors. And remember to return the exposure value number back to zero when you’ve finished because on most cameras it will stay at its last setting even if the camera is turned off and then on again.

Try for something in the foreground– for example, a tree or a person silhouetted against the colorful sky. (Make sure your flash is “off” for this effect.) More distant objects could be structures (like a lighthouse or a sailboat) or a barn or grazing cattle if you’re shooting a rural sunset.

Finally, to spice up the colors, take your camera off the “Auto” white balance setting and manually set it to “Cloudy” which will add reds and yellows to warm up the colors so they really pop. 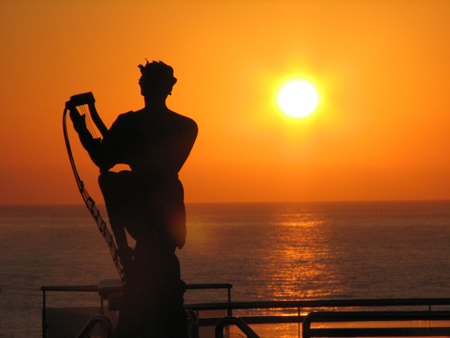 A dramatic sunset at sea was shot in the Caribbean by workshop attendee Birget Bienek during a digital photography cruise conducted by the writer of this article.