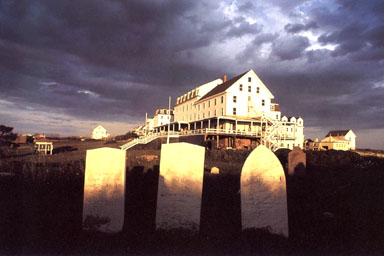 Late afternoon sunlight washes over the hotel and graveyard on Star Island, NH, as storm clouds race overhead. The image is part of a photo essay by Peter E. Randall.

A photo essay is a group of images connected by a theme. It’s easier to shoot than searching randomly for picture possibilities because the theme determines the kinds of shots you’ll need.

Pick a subject you’d like to visually explore in depth. Is there a bridge that’s always fascinated you? An intriguing deserted farm? A particular block in your city that’s alive with action? Choose anything that can be tied together by the sum of its parts, but not something so big that it becomes overwhelming. Other good essay themes that come to mind are historic buildings or districts, country churches, airport and train stations, parks and amusement attractions– you get the idea. 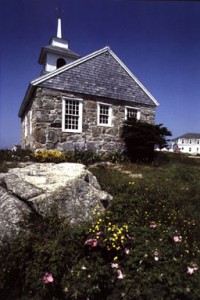 Flowers and granite boulders lead up to this old stone church on one of the Isles of Shoals © Peter E. Randall

I suggest you don’t do photo essays on extreme subjects like homeless shelters or drug rehabilitation centers because these require a high degree of technical skill and are frequently quite stressful. You may not be ready to handle it yet. But it’s something to keep in mind as you gain more confidence; organizations like these can always use good pictures to promote their worthy causes.

Instead, stick to essay themes that you can control and which are relatively self-contained. Remember, you don’t have to shoot the whole enchilada. For example, if you choose a bridge, you can narrow it down to exclude certain aspects such as people and cars if you’re just interested in exploring its design elements such as cables, towers, and structural patterns. 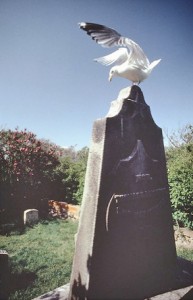 Your pictures should make people say: “Gee, that’s an interesting angle,” or “I never noticed that before,” or “What a beautiful time of day you chose to shoot this.” Don’t forget the little details. They may not be particularly outstanding alone but when used in the context of the essay will enrich it. For example, if you’re shooting that exciting city block, a fire hydrant with a smiley face drawn on it or gang graffiti sprayed on a wall are images that make strong visual statements so don’t neglect to shoot them.

Your essay subject should really interest you– enough so you won’t tire of it quickly. Some research may suggest interesting visual paths to follow. 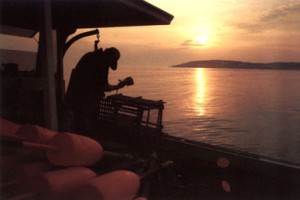 A lobsterman is silhouetted at the end of a day’s work. The white floats in the foreground are subtly tinted by the orange glow of sunset. © Peter E. Randall

I remember passing through a little Pennsylvania backwater called Mast Hope. What a weird name, I thought. Turns out it was the only area of the country in which trees were found to be large enough to provide masts for the USS Constitution.  From that, an entire picture essay evolved.

The photos that illustrate this article were shot by Red River Paper PRO Peter Randall. For more than 30 years, Pete has returned to the Isles of Shoals off the coast of his native New Hampshire, making a photographic record of the fascinating lifestyle there.

Rest assured, you won’t have to spend 30 years on your photo essay (though you just might want to). Start by picking a suitable subject, explore it visually, and then put together your own collection of images. You can then print them out, turn them into a book or exhibit them. It’s bound to be one of the most stimulating photographic adventures you’ll ever embark on.