Home » About Photographers » Rock Solid Images From The 60’s

Rock Solid Images From The 60’s 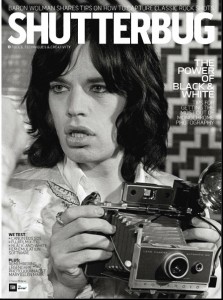 Mick Jagger, way back then, using the latest and greatest Polaroid camera to shoot pictures of fellow performers. Read the full article below. Photo © Baron Wolman

“It seems,” recalls Bleich, “that everything was conspiring against it ever being published.” The article was assigned in 2012 by Shutterbug’s then-editor, George Schaub, right in the middle of a move that Bleich, his wife and six cats were making from Florida to New Hampshire. That delayed working on it for about six months.

Then, Wolman got tied up for months and just as they were about to resume working on the article, Bleich had some family matters that took almost a year to resolve. During that time Schaub retired from Shutterbug and the assignment was put on hold.

“I figured for sure it would be scratched,” Bleich remembers, “but Shutterbug’s new editor, Dan Havlik, was interested in pursuing it.” So Bleich and Wolman got to work on it again and finally finished it. Havlik liked it so much, he decided to run Wolman’s image of Mick Jagger on the cover to accompany the profile, but it would still be yet another six months before the article would appear in Shutterbug’s October 2015 Black and White issue.

Though Wolman’s images had been featured on scores of Rolling Stone covers, this was his first on a photo magazine and he was thrilled about it.  As for Bleich, he says: “Writers and photographers have to develop a lot of patience– it goes with the territory.”

Click on the link below to enjoy the interview and images just as they appear in the magazine.