How To Shoot Prize-Winning Photos, Part 1

Over the years, I’ve analyzed what separates prize-winning images from the rest and I’d like to share with you what I’ve discovered in this two-part series. Even if prizes are not your goal, you can take a creative leap forward if you keep these suggestions in mind. Every pro has them burned into their thought processes and all photographers who want to improve their work can benefit from them. Let’s begin. Classic and contemporary art such as Nighthawks by Edward Hopper, 1942, is a great starting point for learning about composition and lighting.

Look at Lots of Pictures. Writers read a lot, artists hang out in museums, and photographers should be looking at as many pictures as possible. After awhile, you’ll begin to get a feel for what’s good and what’s bad. When you see an image that really grabs your attention save it for future reference. Not that you’re going to slavishly copy it, but it can give you a good starting point for approaching a similar subjects. Don’t overlook comic book art and creative shots on TV. Snap pictures of these images and collect them in a folder on your computer. Then go through them from time to time.

Choose the Right Subject. Not everything makes a good picture and you should just take a pass on some subjects. If it doesn’t feel right after doing ten or so shots, let it be. Or figure how, under different conditions (at a different time of day, for example), it might be improved. There’s no reason to spend a lot of time on bad subject material when so much good stuff is out there just begging to be captured.

There are at least 20 abstract images that can be made by zooming in on sections of this sign and others like it. Tilt your camera at various angles and you may end up with a prize-winner.

Keep Your Eyes Open. Photographers who trekked around with Ansel Adams at his workshops would invariably walk past subject material that he would see and turn into great photographs. We are so blasted with visual stimuli that we take in everything as a whole and ignore individual parts. Learn to tune in by breaking things down into smaller pieces. Look at your surroundings with a new eye and see the possibilities in everything, from reflections in windows and puddles to close-ups of fragments of signs that can make great abstracts in bold colors. You can easily train yourself to do this by just homing in on the pieces that make up the whole.

See Different. Looking at things from a new point of view can transform a mundane subject into a strong picture. Most photographers are just plain lazy (or self-conscious) when it comes to putting some physical effort into getting low to the ground or up high on something to get a different angle. Shrug off the stares and just do what it takes to get the shot. Put some tilt into static shots to produce diagonal images that give the feeling of motion. Come in ultra close or move back ultra far. And did you know your camera can shoot vertical pictures as well as horizontal ones? You do that by turning it 90-degrees to the left or right.

Simplify. “Simplify! Simplify!” That was Thoreau’s mantra when he lived alone in a cabin on Walden Pond for a year. Architect Mies Van Der Rohe had the same advice: “Less is more,” he said.  That’s what you want to strive for in your photos. Move in to eliminate distracting elements that will detract from your subject. Carefully look at your background before you release the shutter and see, if by moving a bit this way or that, you can get rid of clutter that will confuse the eye. Simplify your colors, too. A few strong colors are better than many. And sometimes, very little color is best of all. Even with Photoshop at the ready, try to frame your shot as perfectly as possible– it’ll save you hours of work later and sharpen your eye. 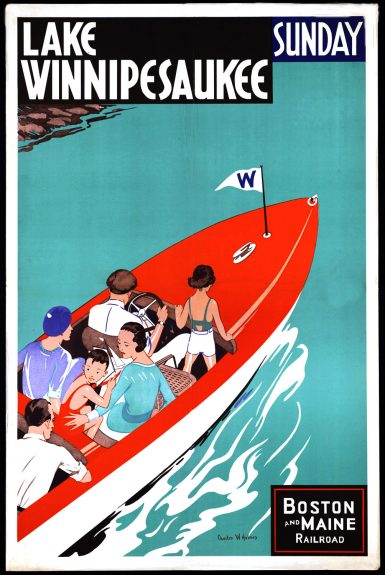 Let’s see how good your powers of observation are. What visual element would have to be added to this old NH poster if it were used today?

Think “Poster.” People are attracted to posters of all kinds: movie posters, recruiting posters, propaganda posters, sales posters. Study these carefully and you’ll see that their visual elements are very strong; they get your attention quickly and hold it while they deliver the message. Next time you’re out shooting, try for that dramatic poster effect. You achieve it by using simplification to get rid of elements that don’t contribute to the visual message. Use strong colors, add an unusual angle and you’ll have a powerful picture.

Part 2 will be posted soon.

Your comments are welcomed.