Back to Basics: Resolution Simplified, Part 2

In Back To Basics: Resolution Simplified Part 1 camera and print resolution were explained. In this part, we’ll cover printer resolution, how to select the best printer settings for quality output and how to add more pixels to an image to enlarge it (within reason) without it looking like patchwork of pixels. To make things as easy to understand as possible, I’m not diving too deep because I don’t want you to get cerebral bends. If you’re interested in more theory, simply Google “resolution” on the web.

How Your Inkjet Printer Produces Images 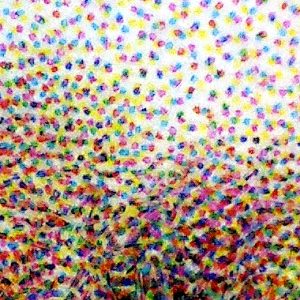 Highly magnified ink drops also referred to as dots. They form each image pixel’s color. The resulting pixels (not visible here) are the building blocks of the image.

Depending on settings you choose, the printhead will move in one direction only– coming back to its starting point each time or it can lay down dots in both directions.  It can also (as you choose) chug along slowly (for more detail) or speed up to output a print more quickly. And most printers can do any combination of the above at your command.

The number of dots laid down at the same time along a horizontal and vertical inch of paper indicates the resolution that you have selected and is measured in dots-per-inch (dpi). The color of each pixel is made by many dots being laid down on top of one another in rapid succession. The printer has to have at least three ink colors (Cyan, Magenta and Yellow) plus Black (abbreviated by the letter K) to create a color image.

You may wonder how square pixels can be formed by round dots. Try this: take a pencil with a very sharp point and use a series of dots to outline a square. When you look at it from a distance, it looks square because the dots are so tiny that they look like a straight line. Printer dots can also be varied in size; large dots for shadows, smaller ones for highlights– all at the same time as the printhead moves over the paper. 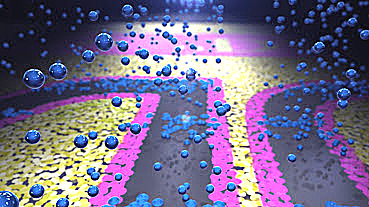 Photo printers have multiple, user-selectable, dpi resolution settings. Generally speaking, on Epson printers, settings of 720 x 720 dpi or 1440 x 720 dpi will reproduce each individual pixel sharply and its color accurately. When printer resolution is expressed as two different numbers, for example, 1440 x 720, the larger number is the horizontal number of dots-per-inch laid down and the smaller number indicates the dots-per-inch laid down vertically as the printhead moves across the paper. On a practical level, you need not be concerned about this as you will see next.

Inkjet printer manufacturers always tout their highest printer resolution as if it were some kind of holy grail. At this point you might be thinking: I don’t have numbered resolution settings on my printer and you’d be right because, depending on the paper type you select, the dpi values correspond to print menu settings that have names such as Draft, Standard, Normal, Photo, Best Photo, Fast Photo, Fine Photo or a setting on Epson printers called Photo RPM (Resolution Performance Management). And they are usually listed in the menu beginning with the lowest resolution. Some are not available with all paper types. The menu choices displayed are usually limited to higher-resolution settings when you use high-end papers.

Each of these settings determines how many ink dots-per-inch are laid down that ultimately define the quality of each pixel– from a very low 320 to a supposedly-enhanced 5760 dpi. The general rule is that the higher the dpi the better the tonal nuances of the image, its color quality and color blending. The lower the dpi, the more “grainy” the image is apt to look. But the following example may give you something to think about. 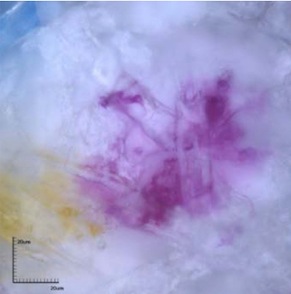 Papers can have a huge impact on image quality. Here’s a single dot of ink on plain paper. Photo Courtesy of Landa Digital Printing.

Recently, one of my neighbors wanted to re-paint his gray barn a traditional red. He put the first coat on but some gray still very faintly showed through in a few spots.  So he gave it a second coat and it looked perfect to me. But then he decided to give it an a third coat– “Just to make sure.”  Trust me, it didn’t look any better.

You only need enough printer resolution to get an image that looks good to you. And that means you should run a one-time test, using your favorite papers, to print the same image at, say, around 8 x 10-inches using different settings and then comparing them. You’ll then know what works and what doesn’t. And once you do, it’ll save you a lot of time and a bundle of money on ink.

Printing at a dpi setting that’s too low will give you a lousy image. But printing at one too high will slow down the printing as more dots need to be laid down for each pixel and in some cases may even make your photo look worse. And it will definitely use more ink, sometimes twice as much. So let your eyes be your guide and view the results at a normal viewing distance– not under a magnifying glass or, as some nit-pickers do, under a microscope. 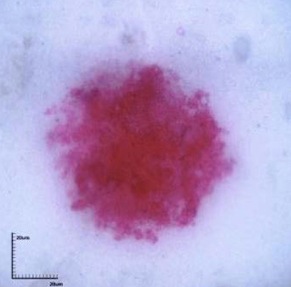 The same color dot on a coated paper such as Red River photo paper. Photo Courtesy of Landa Digital Printing.

For most images, 720 dpi of printer resolution (usually the Photo setting) will be enough when printing a photo at an image resolution of 200-300 pixels-per-inch (ppi). On some images that contain subtle tonalities, 1440 might show those differences better but not always. In any case, my experience has been to steer clear of RPM or super-high settings. Don’t be reluctant to try the “Hi Speed” option which tells the printhead to lay down dots in each direction of its travel. Bi-directional printing in conjunction with different resolution settings can speed up printing and still produce acceptable results. You be the judge.

Now here’s another point: If you make big prints, say 11×14 and larger you will normally view them from further away. Therefore, your eyes cannot resolve as much fine detail as if they were viewed close up.  Which means, you can sometimes “get away” with using lower resolutions in both ppi and dpi. It might surprise you to learn that billboard art and photos are usually printed at very low resolutions because that is all that’s needed for the human eye to blend them into a perfect image from the distance at which they’re viewed.

Finally, outputting a quality print at any printer resolution setting depends on your printer firing those micro-dots of ink through each and every nozzle. So regularly run a nozzle check and do a cleaning cycle if some are clogged.

The Digital Magic Of Interpolation

Using a high dpi setting on your inkjet cannot improve the basic quality of your image; only more pixels in the image can do that. Remember the stretchy rubber photo we described in Part 1? If you try to enlarge your picture too much, pixels get bigger and bigger and begin to be noticed; a high dpi setting on your printer may just make them look better defined so you can see them at their worst. You must have enough pixels in your image to begin with and they must be close enough together so as not to degrade the image.

Now there is a way to get both a larger image size and the higher ppi value needed to make it look good. You can use some digital magic called interpolation (aka resampling or upsampling) to tell your imaging program to add more pixels to the image (within reason) to produce a smoother-looking print. Simply unlock the picture size and ppi relationship (usually by checking a box called Resample Image in your image editing program) and then type in both the image size you want and a higher ppi value. At first, you’ll have to make a few guesses until you get the feel for just how high you can go. 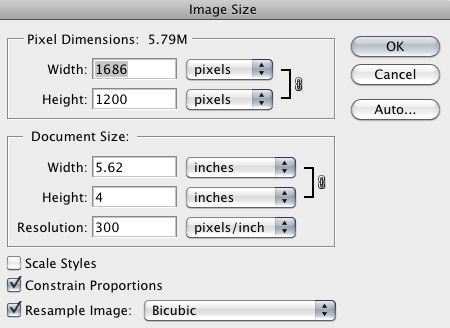 Here’s the Photoshop menu (when you click on Image > Image Size) that allows you to use interpolation. Note the two boxes that have to be checked. You can now keep the image resolution at 300 but increase its size to about 8×10. To go even bigger, you could drop the resolution to 200. Many web sites have tutorials that will walk you through this.

Note that there’s a big difference between resizing and resampling an image. Resizing works with the pixels you have and, like that stretchy rubber photo, you’ll run into trouble if you don’t have enough of them per-inch to produce a good image. Resampling adds (and can also subtract) pixels to produce a better image at the size you want. As an aside here, printing a very small image with too high a resolution can also make it look fuzzy; if so, you can remove pixels by downsampling it.

Resampling to add pixels won’t give you as good a picture as if all the pixels were there to begin with (because the program is spinning them out of thin air and making an educated guess as to what colors they should be), but built-in interpolation software has come a very long way since imaging programs first evolved. If you  sharpen the image a bit after it’s been resampled, you’ll usually be pleased with the result– provided you don’t push it too far.

In Photoshop you have several choices when it comes to resampling. Bicubic is the default and produces fine all-around results. Bicubic Smoother may sometimes be better for upsampling (adding pixels) because it reacts to subsequent sharping a little better. And if you need to downsample (remove pixels) Bicubic Sharper may be a good choice. Again, make some tests with the same image– you only have to do it once and that takes all the future guesswork out of it.

To sum up, the concept of resolution in terms of cameras (pixels), printed images (pixels-per-inch), and printers (dots-per-inch) is something you need to understand if you want complete control over your images from capture to print. Sure, it may take a little time to understand how the concepts work together and a bit of effort to do a few tests. But once you “get it” your prints will be awesome. I guarantee it!