Home » About Photographers » For Love Of Lions

For Love Of Lions 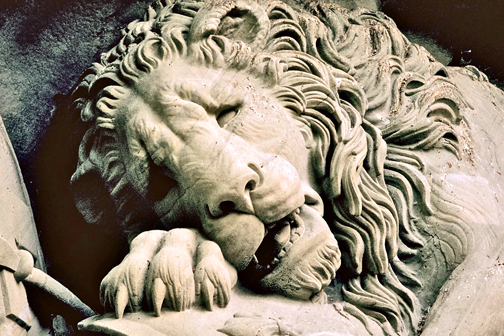 My first published photo in a book was a pub sign–The Old Red Lion–shot in a now-forgotten English village. It wasn’t until many years later, though, that I had an epiphany when I came face to face with the sculpture of the Lion of Lucerne in Switzerland.

Carved in 1820 as a memorial to the bravery of 600 Swiss Guards who lost their lives in 1792 during the French Revolution, Mark Twain described it as “the most mournful and moving piece of stone in the world.”

After my “Kodak Moment” in Lucerne I got to thinking I’d found the perfect subject for a long-term photo project. Gradually I began to keep my eyes open for lion statues as I traveled. 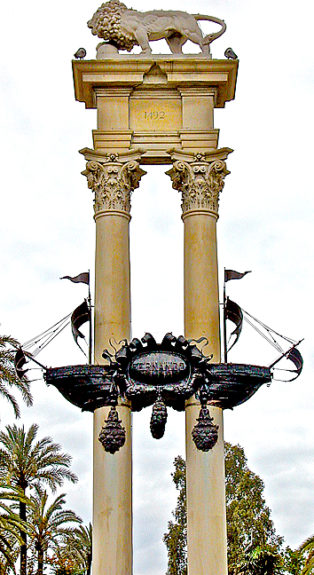 Travel has long been one of my passions. Whether for business or pleasure I’ve always enjoyed seeing new sights and savoring new experiences.

So when I retired from the advertising world in 1990, I sought a challenge that would keep my creative juices flowing and satisfy my wanderlust. I didn’t need to look far; the answer was in the lion slides I had begun to collect.

I envisioned a book of lion photos but the problem was locating and identifying those I wanted to shoot. I pored over books and magazines in search of candidates without much success. 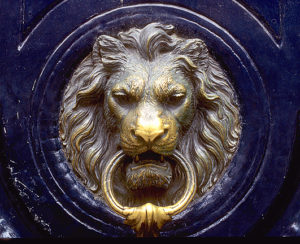 A Swedish friend advised me on the location of  lions  in Stockholm and Gothenburg. Local tourist organizations in Madrid, Geneva, Brussels and other cities were more than happy to help

Some cities teem with lions; Venice, Paris and London stand out. In other places, like Alaska, don’t expect to find any. But oddly enough, Liviv in the Ukraine had a plethora of them when I visited there in 2010.

By the time I embarked on the first of five European photo safaris in 1994, I had established a routine that would serve me well. My inaugural three-week trip took me from Brussels to Nuremberg, Prague, Budapest, Venice, Rome, Barcelona, Paris, Dublin and London. 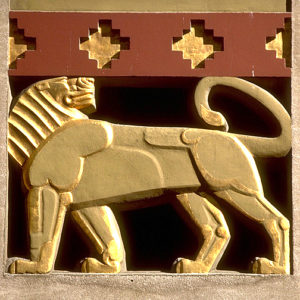 I traveled by plane, train, ship, bus and foot, staying mostly in budget hotels near railroad stations to facilitate a fast getaway in the morning. And I traveled light, using a Nikon SLR with a reasonably long zoom lens, a lightweight tripod and Kodachrome film. When I returned home the film was processed and the slides scanned onto Kodak Photo CDs.

My world expanded in the late 90s as I traveled to South America, Australia and New Zealand. Eventually I would visit more than 300 cities, towns and villages in 60 countries. By 2002 I had more than 1,200 lion images scanned to Photo CDs and had switched to digital cameras. The PCD format eventually became obsolete but fortunately I’d saved my scans as Jpegs so they were still readable.

Lions continue to fascinate me. Not just statues portraying the king of beasts in customary poses, but portrayals of extraordinary situations and unique interpretations. 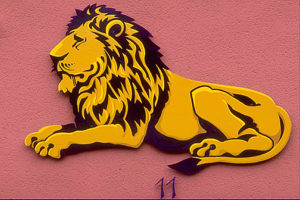 In Paris I photographed Drama in the Desert, which shows a man hiding from a lion who hovers over him on a ledge. In Gdansk I shot a fountain featuring four recumbent lions. And in Singapore I discovered a life-sized lion composed of wood scraps.

It’s only natural to consider photography as the biggest challenge in creating the kind of book I had in mind. Some of the problems I ran into are normal and others not so. For example, sometimes it’s nearly impossible to photograph a lion landmark without people walking through the frame or popping up in the background.

Then there are rules. The Vatican police had no objection to my photographing lion ornamentation on the obelisk in St. Peter’s Square but ordered me not to use my tripod. And there are problems of identification; most big cats are hard to tell apart. The male lion is distinguished by his mane but in bronze or marble, lionesses, tigers and jaguars often look confusingly similar 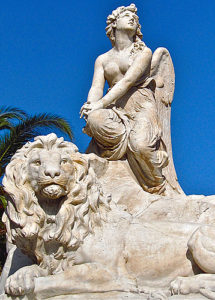 Most frustrating, though, is the unexpected. I once arrived in three different German cities during a trip and found the lions I wanted to photograph had either been crated for winter protection or sheathed in plastic for cleaning.

When I first proposed a lion book to a New York publisher, he asked, “Who would buy a book like that?” I suppose the same could be said of any book. Ultimately I opted to self-publish and am in the process of organizing my images. The ball is currently in my court but the clock is ticking.

Once I wrote that if my book is ever published I hoped it wouldn’t be posthumously. If you undertake a long-term project like this, my advice would be to set deadlines for yourself and avoid procrastination. Sad to say, I haven’t followed my own advice but I haven’t given up.

Kenn Jacobs spent nearly 25 years at the Rochester, NY office of Saatchi and Saatchi, where he was responsible for creating award-winning ads for Kodak Professional Products and editing International Photography magazine. He now lives in coastal North Carolina.

If you are a publisher interested in collaborating with Kenn on his book,  contact him at: [email protected]

Be sure to Sign up for the Red River Paper Newsletter