Home » Imaging » It Takes Guts To Use This Camera

It Takes Guts To Use This Camera 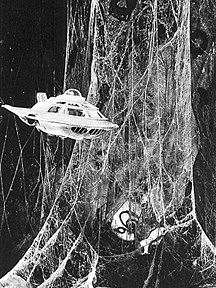 The fictional Proteus traveling through the bloodstream on its way to remove a blood clot in the brain. Photo © 20th Century Fox

In the 1966 movie Fantastic Voyage, a team of scientists and their submarine are reduced to microscopic size and inserted into the bloodstream of a colleague to remove a blood clot in his brain; a procedure too risky to do surgically. Science fiction? Of course­– but a thriller all the same.

By 2001, scientists have shrunk a digital camera, lights and a radio transmitter to fit into a vitamin-pill-sized capsule that can be swallowed. It travels through the body transmitting images of abnormalities to a hard drive. Those images are then downloaded and displayed on a computer screen for analysis by a doctor. Science fiction? No– but still a thriller. 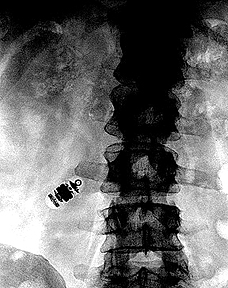 Doctors can easily examine most of your digestive system with instruments but until recently, the 20 or so feet of the upper tract ­–the small intestine– where food is digested after it leaves your stomach, was  out of reach. Even sophisticated scanning couldn’t always reveal abnormalities such as tumors, blockages, and internal bleeding. Difficult cases required exploratory surgery or making a best guess– which was not always the right guess.

Flash back to Israel in the 1980s. Gavriel “Gabi” Iddan, an electrical engineer, is working on a government project to miniaturize missiles when a doctor he knows complains about how hard it is to diagnose problems in the small intestine. Iddan is intrigued and starts to work part-time on a solution. 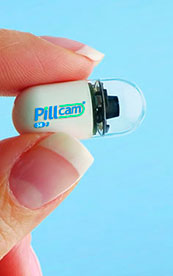 Despite its hefty look, the PillCam is easy to swallow.

But he can’t bring it to fruition until the late 1990s when the digital revolution explodes, making inexpensive technology available. Suddenly, small cameras and transmitters can send images to storage devices and transferred to computer screens for analysis.

By then Iddan had left military research to form Given Imaging, Ltd., a startup that would develop and manufacture what he named the PillCam. In 2001, the device received FDA approval in the U.S. and has since been used more than 1.5 million times by more than 5,000 medical facilities in more than 75 countries. In 2013, it was sold to an Irish medical device maker for $860 million.

The PillCam is 11mm by 26mm (1/4 x 1 inch) and weighs only 3.7 grams (less than an ounce) which allows it to pass through the digestive system unobstructed. It contains an imaging chip video camera, six LEDs, two silver-oxide batteries and a radio transmitter– all crammed into a space the size of a large vitamin capsule

Never before had so much been packed into a space so small. The PillCam is one of the most miniturized image capturing systems in the world (and it may get even smaller),

The camera takes images at a rate of 2-6 frames-per-second as it meanders along for eight hours or less– about 50,000 images in all. To keep track of the PillCam from second-to-second –so doctors can tell when and where each image was taken– a series of sensors similar to those used for an EKG are temporarily attached to various points on the body and, like a GPS, are used to pinpoint the PillCam’s location.

Time and location data is sent along with the images to an external hard drive –about the size of a pager– worn by the patient. Using special software, the images are then viewable on a computer screen and can be freeze-framed to spot anomalies.

The procedure costs around $1,500 –the camera accounts for $500 of that­– and most insurance companies pay for it. When the camera finishes its work, the capsule just passes out of the body– $500 down the drain, so to speak. 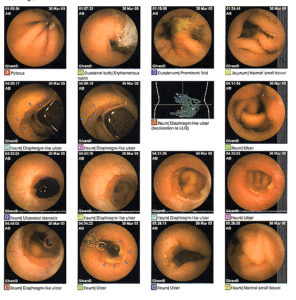 15 images – out of more than 50,000– that show various anomalies in the upper digestive tract of a patient. Photo courtesy of Sylvester Cancer Center.

Iddan feels his invention is also the fulfillment of a Biblical prophecy. In an interview with the Times of Israel he said: “The PillCam was based on military technology and [is] a good example of how we shall beat our swords into plowshares and other useful devices, as the Hebrew prophets predicted.”

Few would say that the PillCam is not useful device– even a lifesaving one. Its technology may not be as impressive as that in Fantastic Voyage but then, that’s only fantasy. Who knows, though? As devices continue to shrink, fantastic voyages don’t seem so fantastic anymore.

You are invited to comment on this article below.