Home » About Photographers » New York In The Snow

New York In The Snow 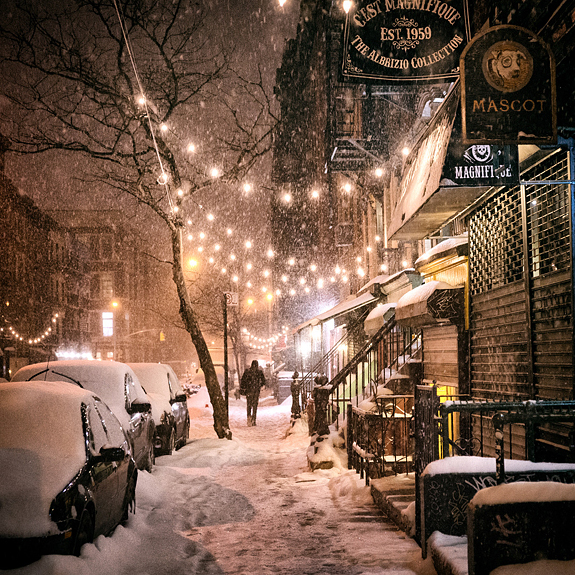 I wish I could say that there was one photo that started it all. It would be the one photo that somehow ignited my passion for snow photography in New York City. The one that people could look at to understand why I might walk up to eight miles through snowstorms at night. But there isn’t. That’s because my passion for New York in the snow began at a very early age.

I grew up in a financially challenged household in a tumultuous set of circumstances in Queens, New York City. I spent an inordinate amount of my childhood daydreaming and wishing myself into the other lives I either read about in literature or saw in the vast number of movies I watched. 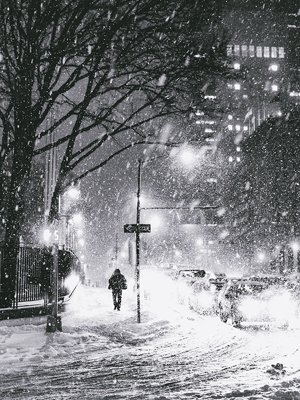 A few memories from that time period stand out as brilliant beacons of light in an otherwise stark and bleak memoryscape. One such memory was getting pulled on a neighbor’s sled through the streets of Flushing late at night during a blizzard. I remember looking up at the streetlights through the large fluffy flakes as they cast the most beautiful warm glow over the empty streets. We may not have had a lot in the way of material possessions but in that moment it felt like the city was ours. And there was a gorgeous silence that rooted itself deep inside of me until all of life seemed muffled, silenced into an eerie submission, and all that was left was the purest feeling of peace.

That particular silence resonated so loud that it became the moment I would replay over and over again at night as I drifted off to sleep. It wasn’t until I discovered photography accidentally in 2010 and decided to trek through Central Park in a blizzard with camera in hand that I even thought I could attempt to convey how that childhood memory had made such an indelible impression on my soul.

My photography has been an exploration of both isolation and nostalgia, and I have found that my snow photography in New York City has often unconsciously tackled both themes, sometimes at the same time. In a city of millions, isolation is something I have grappled with personally, especially since it seems to go hand in hand with anxiety. Loneliness is one of the most visceral states of being when surrounded by millions of people, and that sense of isolation becomes super apparent on nights when the snow blankets the streets and only a few people walk the streets.

When I return back to my apartment after walking seven or eight miles through the snow, it’s as if I have walked through dreams all night, sleepwalking through an almost empty city. And it’s one of the most incredible feelings I have ever experienced. 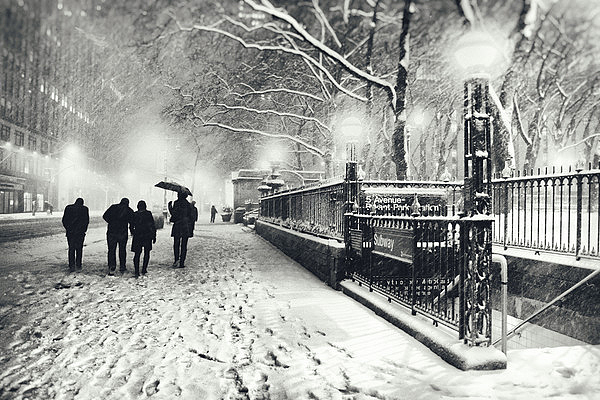 A lot of people have asked me about how I protect myself and my camera when I take my snow photos. I have photographed every single snowstorm in NYC for the last five years. It’s my passion project and what I love the most. During the first storm I ever photographed, I nearly got frostbite. I was shooting with a broken point-and-shoot camera, covering it between shots with my useless gloves.

Thankfully, I have come quite a long way since then! My camera bodies (all Sony) do really well in snow and rain, but my lenses are not weather-sealed and I am paranoid about ruining them. So to protect them I use . . . drum-roll . . . a plastic bag! To be precise, a trash bag—the thickest I can find. I take the bag and snip one of the corners with scissors. I then put the bag over my lens with the snipped corner in the center of the lens. Then I stretch the bag over my lens with only the glass of the lens exposed. 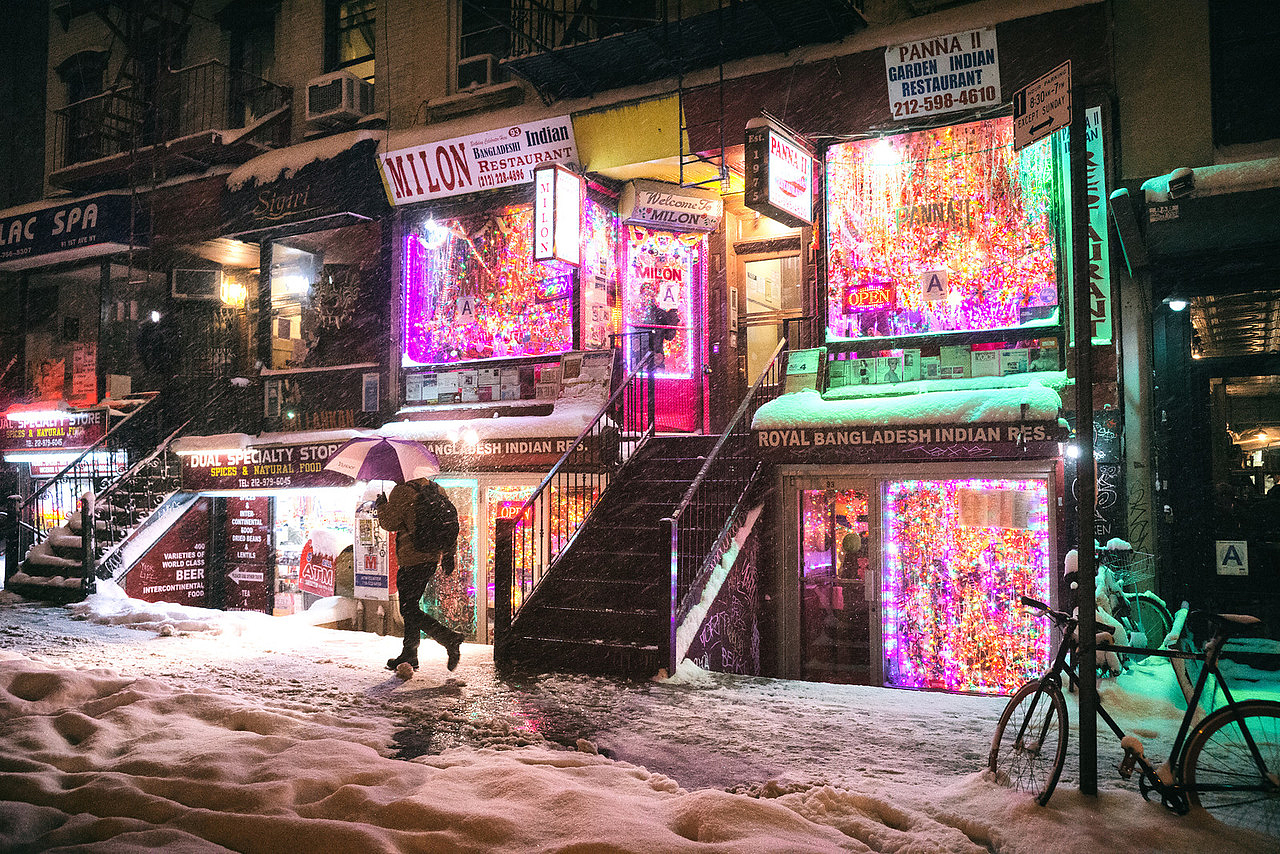 When the lens is covered (this bit is important!), I take the lens hood and put it on the lens with the bag stretched as already detailed. Sometimes I take a hair-tie or rubber band and put it around the lens near the body. The hood is useful protection when walking around for miles.

I point the camera down between shots and blowing snow collects on the outside of the lens hood, where it can easily be brushed off. Since I always shoot in manual mode, and because I’m mainly shooting these photos at night, I check and adjust my settings every single block so that I don’t miss a shot. I have to shoot very, very, very quickly due to the conditions. 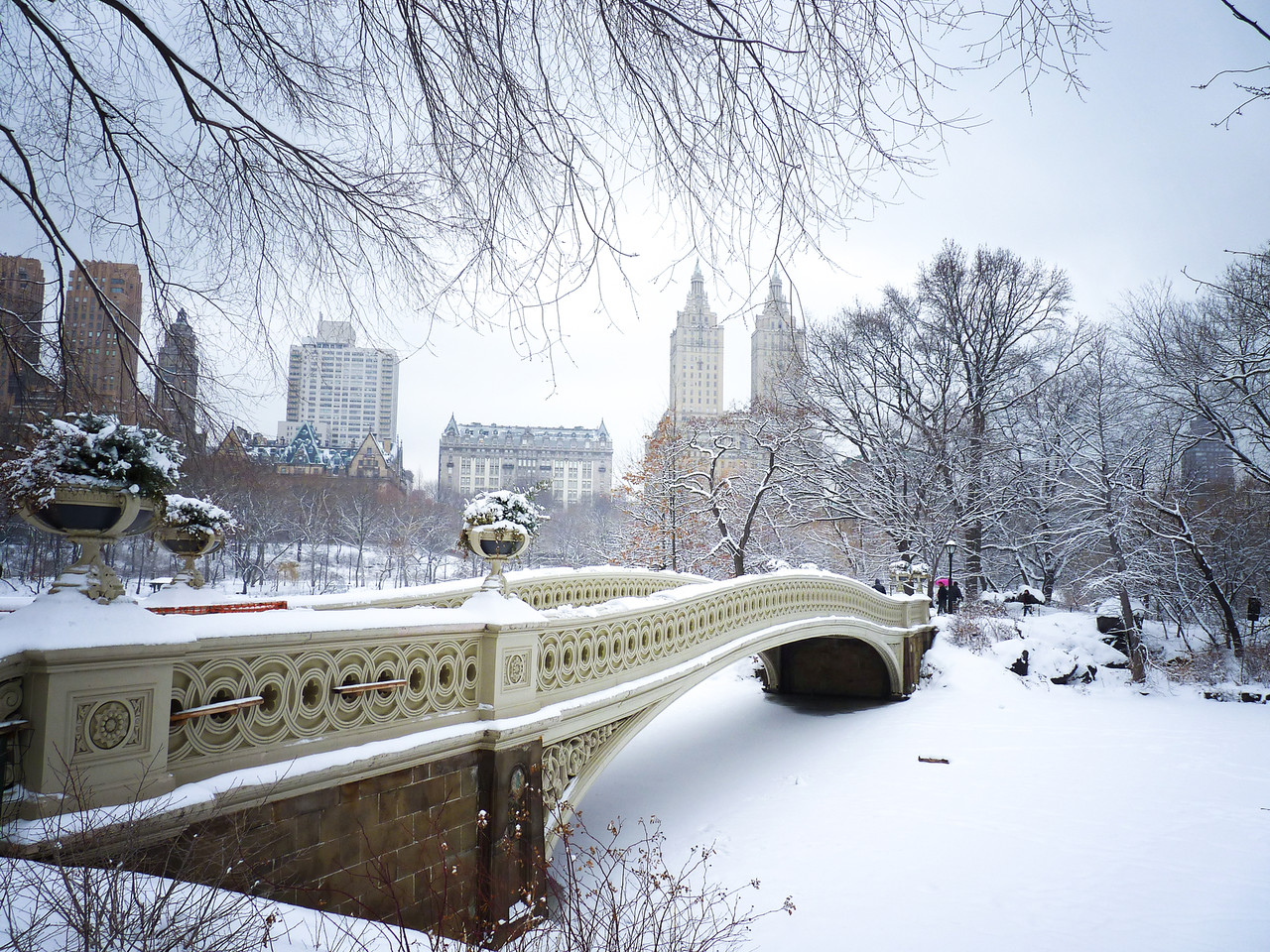 Outer clothing: I wear a waterproof, insulated, down-filled, knee-length parka, and insulated, waterproof snowboard/ski pants with waterproof snow boots (great grip, and grip is a must—I learned my lesson the hard way two years back). I wear a balaclava, ski goggles (eyes are important and only one of mine works), and a beanie hat. I have to have my hood up and drawn to my face to keep the blowing snow away from my head area. I have giant Thinsulate gloves that I wear with thin gloves underneath so that my skin is never exposed when I mess with my manual settings every block.

Inner clothing: thermal leggings, shirt, and socks, a breathable light layer over the thermal shirt, and breathable thermals over the leggings. Something I have learned is that breathable fabrics are essential. When you’re walking several miles, even in below zero windchills, you can get hot. If you are too hot in your gear you can become dehydrated from sweating too much, and in extreme conditions this can contribute to hypothermia. 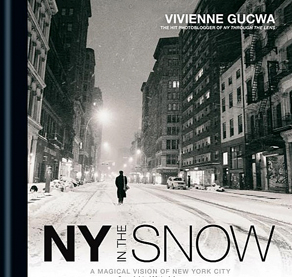 For more than a decade, Vivienne Gucwa has been roaming the streets of New York City, day and night, in wind and blizzard to capture visions of the world’s most famous city that have rarely been seen before.

This excerpt from New York In The Snow by Vivienne Gucwa © 2017, has been reprinted by permission of the publisher, ilex Press, a division of Octopus Publishing Group, Inc. The list price of the 192-page photo book is $24.99 and it is currently available from Amazon and other booksellers in both hardcover and e-book versions.