A Great Read: “Photographers On Photography”

Let’s consider the visionaries, the groundbreakers, the original thinkers – those influential figures from past and present who pushed photography forward and continue to do so today. How did they – how do they – approach their craft and what matters most?

Here we have a selection of quotations, photographs and interviews that offer telling insights into the minds of masters. Serving as brief introductions to the big ideas, these collective viewpoints form a thought-provoking photography primer that will enrich your understanding of the medium you love.

Expect different opinions ranging from the personal to the practical, the esoteric to the enlightening. These varied voices come from all genres and eras and include reflections on contemporary concerns, as well as some timeless statements from the old masters.

So dip in and out when in need of a creative pick-me-up, or simply turn the page to start on an ever-deepening journey into the most enigmatic art of them all.

Editor’s Note: Following are some excerpts from the book which covers 50 photographers (with examples of their work) and includes in-depth interviews with five of them.

‘People ask, “what camera do you use?” I say, “you don’t ask a writer what typewriter he uses.”’ —Man Ray 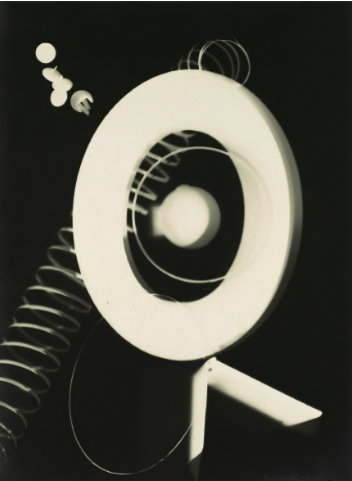 For many fine-art photographers, the question of ‘what camera’ rings out like a declaration of war. To place emphasis on the camera is to assign value to the work based on how the images were made rather than on their artistry or intended meaning. It suggests that
a photographer is a mere technician who has simply learnt how to operate ‘a machine’.

As a photographer who constantly experimented with new techniques, Man Ray must have been asked the question more than most. The irony, however, was that some of his most famous images were products of the darkroom rather than the camera. And in the case of his expressively abstract ‘Rayographs’ (where he placed objects directly onto photosensitive paper to block out the overhead light from the enlarger), Man Ray delighted in removing the camera from the image-making process all together. While this technique is as old as photography itself, his modernist and often indecipherable arrangements remind us that a camera is only one way to make a photograph and that the role of a photographer isn’t simply to ‘show it how it is’. 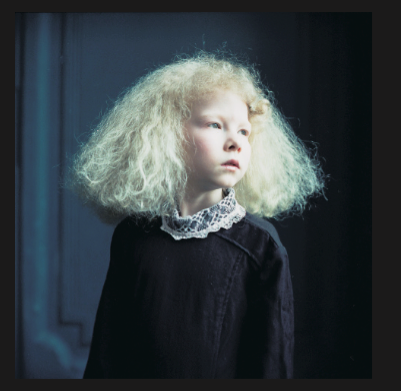 Size has a profound impact on how we relate to photographs.
After everything is done, the same photograph can be printed so small that it fits into a wallet or so big that it fills an entire wall. How, then, do photographers know how big or small to print their pictures? Hellen van Meene reminds us that a photograph’s size is an extension of its concept. Influenced by the ‘quietness’ of Dutch painting, van Meene uses natural light and domestic settings to photograph adolescent girls who appear lost in thought.

She then prints her photographs small (around 28 centimetres/11 inches) because she wants to draw us in, she wants us to physically stand closer, she wants us to have a private encounter so that we feel the introspection of her subjects. If her photographs were larger, we would interact with them very differently. We would need to stand back, it would be hard to take everything in all at once and the viewing experience would likely be shared with others; the physical photographs themselves would conflict with the subject matter and the meaning or mood the photographer is trying to convey.

‘There are no rules. But sometimes you need parameters.’ —Todd Hido

Here Todd Hido reminds us that too much creative freedom
can lead to incoherence, while too tight a brief can be stifling.
For his ‘Landscape’ series, Hido made painterly photographs of beautifully bleak roadside scenes shot through the misty windows of his car. Photographing through the moisture blurs the boundary between what’s near and far, between what’s inside and outside. The glass acts as both a window and a screen, creating images layered with metaphorical clarity and confusion.

Hido decided that he would always shoot from the car, it would always be during winter and the locations would always be nondescript. Other elements such as the time of day, subject matter, colour palette and weather conditions were left open. Those formed his ‘parameters’ – tight enough to focus his creativity, loose enough to allow for unexpected encounters.

‘It’s not that I don’t care about content, but content is not the only way a photograph has meaning.’ —James Welling 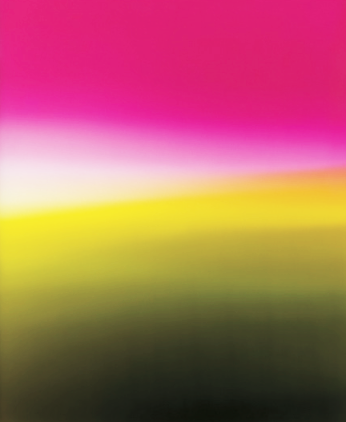 Because James Welling’s work is a photograph, we expect it to show us something literal. We can’t help but see a horizon line separating land from sky. With that yellowy green and plum purple, perhaps it’s a lush Tuscan field under a blazing sunset. Perhaps that wisp of grey is the sunlight reflecting off the distant ocean.

Welling’s photograph is, in fact, of nothing. The product of light projected through coloured filters directly onto photosensitive paper, this is a one-off photograph. It is not made from a negative or digital file, there is no frozen moment, no direct trace from the world and
no subject; it is without content. While captured light is still its main ingredient, here Welling creates something entirely abstract that breaks photography from its representative responsibilities and temporal ties. In so doing, he causes us to reconsider what we have come to demand from photography – subject matter – and challenges the notion that a photograph has to be ‘of’ anything at all. 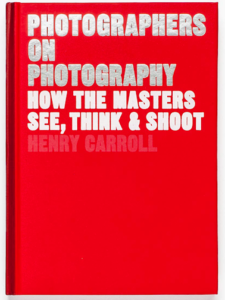 This excerpt is from Photographers On Photography–How The Masters See, Think & Shoot by Henry Carroll, © 2018. It has been reprinted by permission of the publisher, Laurence King Publishing Ltd, London. The 128-page hardcover book is 5-3/4 x 8.0 inches and is available at Amazon.com for $13.51 with free shipping for Prime members.