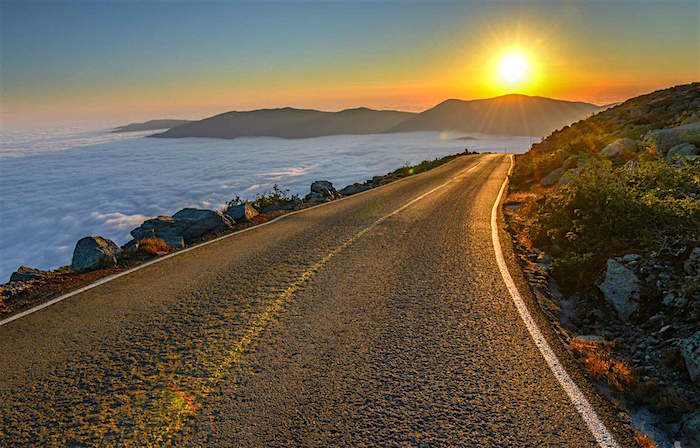 Sunrise above the clouds at 5,000 feet on the way to the top of Mt. Washington, New Hampshire. © ErnieMillsPhotography.com.

There’s a fantastic photo adventure awaiting you, requiring only a vehicle, your camera and some minimal planning for a most exciting trip. And chances are, it’s probably close to where you live and relatively inexpensive to get to so you can take the whole family along.

Okay, what’s the catch? There isn’t any. Geotab, a Canadian firm that tracks truck locations has just built a set of coordinates representing every road in the U.S. and combined that data with the U.S. Geological Survey’s National Elevation Dataset to come up with the height of each road segment.

The result? A listing of 50 of the nation’s highest paved roads, one in each state, from a mere hiccup of 347 feet in Florida to a towering 14,132 feet in Colorado.

These are the top 10 but all 50 of them are all worth driving. (For the complete list, see Resources at the end of this article.)

Maria Sotra, VP of Marketing at Geotab, says that their efforts are “a useful reminder of the sheer beauty that can be seen across America’s world-leading road network.”

She points out, “Thanks to the nation’s ever-growing infrastructure system, you no longer have to embark on a grueling hike or commit to climbing a mountain in order to take in awe-inspiring views. Instead, they can often be seen from behind the wheel of a car.” 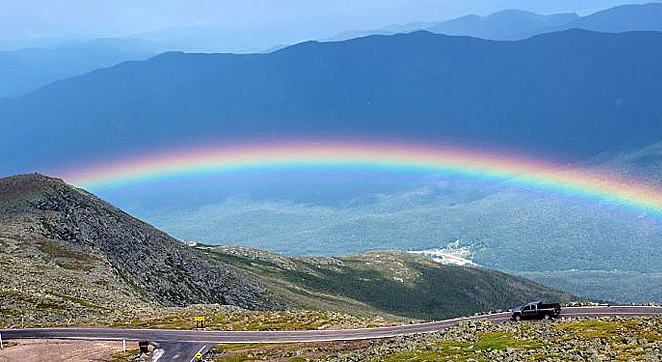 Somewhere over the rainbow, way up high on the Mt. Washington, New Hampshire, Auto Road. ©ErnieMillsPhotography.com

At the summits of many of these mountains, you’ll find lookouts, weather stations, observatories or other attractions. Google the roads that interest you for details. But that’s not all. Along most of these drives, you’ll not only be able to capture stunning scenery, but also a plethora of wildlife as you explore America from some of the most spectacular top-of-the-world viewpoints in each state.

For example, the drive up Mt. Evans offers visitors scenic views of the Continental Divide, along with mountain goat and bighorn sheep herds, wildflowers, and Rocky Mountain Bristlecone Pine trees. 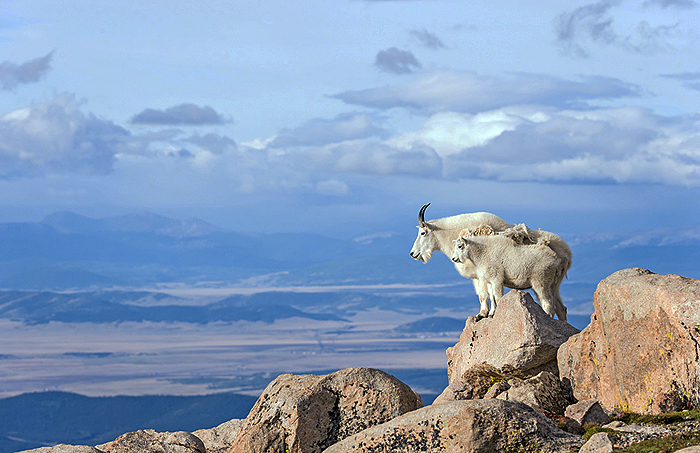 A mountain goat nanny and her offspring stand on a rocky ledge and look out over South Park on Mount Evans, Colorado. Image © Dawn Y. Wilson.

On Hawaii’s big island, the Mauna Kea Access Road is one of the only places in the world where you can drive from sea level to 14,000 feet in about two hours. It’s one of the most scenic and unique roadways in the United States where photographers can experience a tropical climate at the bottom and the potential of getting snowed on at 10,953 feet.

Which are the best? Opinions vary but Alaska’s Dalton Highway at 4,757 feet, (in the Atigun Pass on the Continental Divide), is said to have the most stunning views in America. Close behind is Colorado’s Mount Evans Scenic Byway. At its 14,132 feet peak, it’s the highest paved road in North America and one of the highest in the world (though still dwarfed by 29,029-foot-high Mt. Everest in Nepal). But there’s no road to the top of Mt. Everest and climbing it is kind of risky.

Atigun Pass photographed from the paved section (r.) of the Dalton Highway in Alaska. Image courtesy Hansiphoto via Imgur.

Tony Bynum, outdoor photographer and conservationist has visited and photographed all the roads on the top ten list. (For the complete list of 50 see Resources, below.) His take is as follows: “In general, western U.S. scenery is the ‘best’, with a tendency to offer better visibility– up to 100 miles on clear days. However, most of the higher elevations in the west are closed in winter, whereas the central and eastern roads are often available all year round.”

While the roads are easy to access, you should take certain precautions before you attempt to motor up the mountains. Warm clothing is a must as temperatures change rapidly as you navigate to higher elevations. Take some basic provisions for everyone in case you get stuck; though help is usually available, it might take a while. Don’t tow anything behind you– in fact when it comes to the higher mountains, most vehicles over 30 feet long are prohibited because of switchbacks that have to be negotiated. 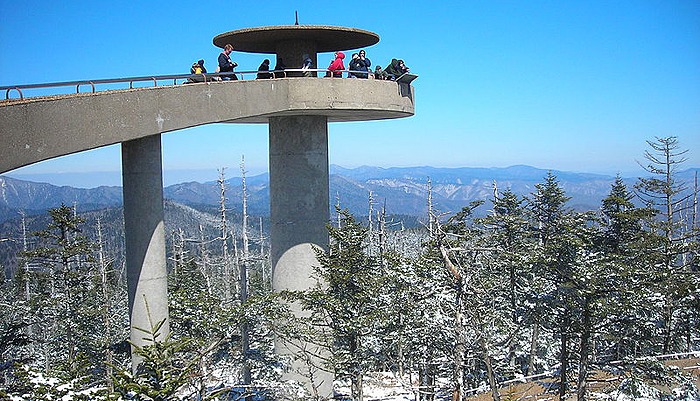 Just a short walk from the end of the auto road, an observation tower rises 50 feet from the 5,740-foot-high summit of Clingmans Dome, the highest point in the state of Tennessee. Image courtesy of Scott Basford.

Expect your gas or diesel vehicle to lose some power because reduced oxygen in high altitudes can lead to inefficient, sluggish performance– even engines can get out of breath. A vehicle can loose three percent of its rated power for every 1,000 feet of altitude gained as the air thins out. That shouldn’t be any problem for most modern cars and trucks, but if you have an old clunker it might be.

All in all, you’ll have a great time and bring back some gorgeous images for just a few hours of an unforgettable drive and not a lot of money. So get a few maps, choose your destination, and go for it!

See the complete list of the highest paved roads in each state here.

Check out the best Red River papers for landscapes and nature here.