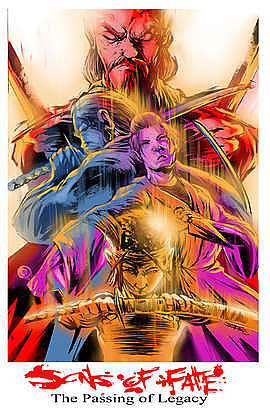 Deshong’s book is a trilogy in four volumes and  is offered in different cover options, including wood.      He hand prints each book on Red River Paper.           Image © Jean-Paul Deshong.

In Japan, Jean-Paul Deshong is a Mangaka, an artist who creates comics or graphic novels– an art form long revered in that country. Top manga artists there make high six-figure incomes and are superstars of the art world. Deshong, an American comic book artist, decided a few years ago to write and illustrate Sons of Fate, a novel set in Japan’s Tokugawa period of isolation from the West that lasted more than two centuries.

It was so perfect in both story and artistic accuracy, it was honored by the Kyoto International Manga Museum and is now in their permanent collection. Deshong flew to Japan for the induction and recalls it as ”an amazing experience.” A Renaissance man, he controls every aspect of his work from initial research to the execution of the story and artwork and then on to the printing and binding of the finished product. Let’s see how it all began.

AHB: What prompted your interest in art?

JPD: I’m an 80s kid who grew up on cartoons like Thundercats, GI Joe, and Transformers, you know, the good old days. I was also a huge comic collector– Gi Joe, X-Men, Fantastic Four. Those were my main influences. From there, it just blossomed. My family always had traditional art and sculpture around, so sub-consciously, traditional art was my first teacher.

AHB: How did your career evolve?

JPD: I’ve been drawing since I was three– wow, that’s 42 years ago. I grew up in New York City and when I went to school I was always “go to” guy when my friends wanted something illustrated. I always was drawing, especially when I wasn’t supposed to and I’d get into trouble for it. But eventually my teachers realized it was my passion, so I was “ tolerated” under conditions…kinda. By the time I was a freshman in college, I was scheduling appointments for portfolio reviews with Marvel and DC Comics.

JPD: I had regular jobs here and there. I think that’s necessary as it teaches not only how to deal with people, but it can be applied to your craft (art school doesn’t teach business). I worked in retail and corporate art jobs and everything in between. 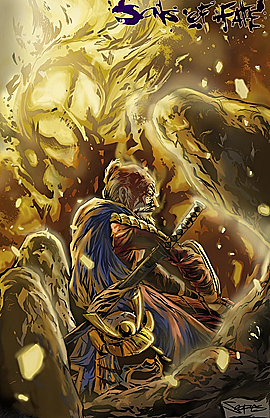 AHB: Since settling into the industry, what have you done?

JPD: I’ve worked for about 10-15 years now as an illustrator, so along with doing my own books, I’d say, 20 to 30 others. It terms of my independent books– they total more than 600 pages. I also do full-blown, illustrative pieces from the series.

AHB: What’s your priority when you decide to do a book?

JPD: My main intention is to create great stories. I’ve been moved throughout my life by books, comics or movies that had something to say. I prefer intellectual entertainment instead of the commercial escapism that we mostly receive today. Something that challenges you and the way you look at things.  I’ve had experiences that changed me and now, being in a place where I get the opportunity, and privilege to do so, I feel compelled to do the same.

AHB: You picked a Japanese setting for Sons of Fate, why?

JPD: I have always been fascinated in the lifestyle of the Samurai. Their beliefs, way of life, and moral code, to me, was some of the most fascinating lore in history. In creating a book, it has to start with something that greatly interests the creator. The dream idea, if you will. Mine was creating a Samurai graphic novel…with a twist. 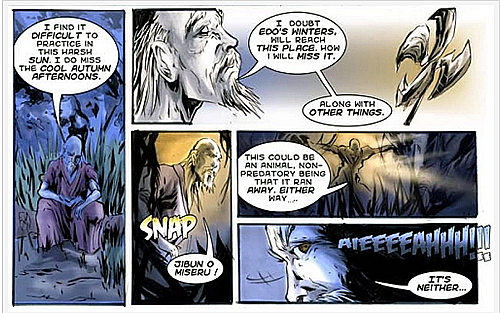 AHB: Why did you choose that particular time in history?

JPD: I thought the Tokugawa era was a great place where I could incorporate the story I wanted to tell and parallel it with the actual history of feudal Japan. Sons of Fate serves as the lost chapter of why the Tokugawa Shogunate closed its doors to the West for more than 200 years.

AHB: Once you settled on the venue, then what?

JPD: I did exhaustive research. I read books about code, culture, lore, mythology and, most importantly, history of the time period. Anything and everything from clothing to hairstyles to bushido stances. I wanted to make sure the book had authenticity. 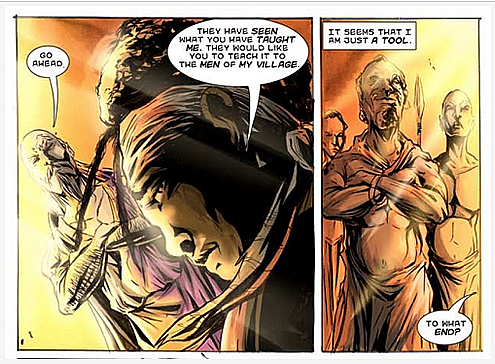 AHB: When you do a book, do you do the text first? Art first? I can see from your work it takes a lot of skill to make them work well together

JPD: With Sons of Fate I wrote it first. As I began drawing it (years later), I realized things had to change due to how I wanted the overall finished product to be, so through experience, I’ve learned to take both into consideration and think of them as one thing.

AHB: How long does it usually take from your initial idea to the finished product?

JPD: There is no timeline. It can take hours, weeks, or months. It’s ready when it’s ready. 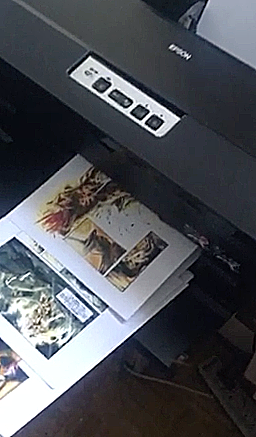 AHB: You personally do every process in publishing your work. What steps do you go through?

JPD: After the story is created, and the pages are produced– written, drawn, inked, and colored (in Photoshop), they are scanned and then collated accordingly. It’s saved into a file and then printed out on Epson Artisan 1430s or Canon Pixma Pro-100s, cut to size, bound, cut again and checked for any errors in the manufacturing. The slipcover is added along with a text strip before it is sealed in packaging.

AHB: I have a copy of Sons of Fate and the print quality is superb, much better than most other books of its kind out there. How come?

JPD: I’m not sure I want to disclose that; it’s a great competitive advantage.

AHB: Aw, c’mon, our readers won’t give it away.

JPD: Well, since you’ve twisted my arm, the secret is the paper I use to print my books. Over the years I’ve tried them all and Red River Paper is the best I’ve come across. There’s something about their 32lb. Premium Matte Double-sided paper that makes both the color and the black elements of my work simply pop with an image clarity that’s rarely seen in the works of my contemporaries.

AHB: In retrospect, are you happy you decided to become an artist?

JPD: That answer has changed over the years. In my youth, it was just fun. As my experience (in life) grew, I realized it was an outlet or a way to express myself in a positive way. What I’m doing is applying line, shape and colors, not only to tell a story, but possibly to move people to feel something about it. It also teaches problem-solving; you have to find a way to execute your idea from thought to finished product without a roadmap. I’ve always been a passionate, (even intense) person, so you might say I didn’t decide to become an artist– I was compelled to.

Visit Jean-Paul’s website  to purchase his books and more.