One of the first tenets of professional photography is that you have to try harder, always and all the time. There’s almost too much said about this, so I’ll restrict myself to one only, from American photographer William Albert Allard: “You’ve got to push yourself harder. You’ve got to start looking for pictures nobody else could take. You’ve got to take the tools you have and probe deeper.”

Well, maybe I’ll allow one more, as it’s from Alexey Brodovitch, the influential and always quotable art director of Harper’s Bazaar in the 1940s and 1950s: “Look at thousands of photographs and store them in memory. Later when you see in the viewfinder something reminding you of a familiar picture, don’t click shutter.” Trying harder and searching for different ways of seeing don’t in themselves count as specific photographer’s skills, but they are very much in evidence in all good photography. 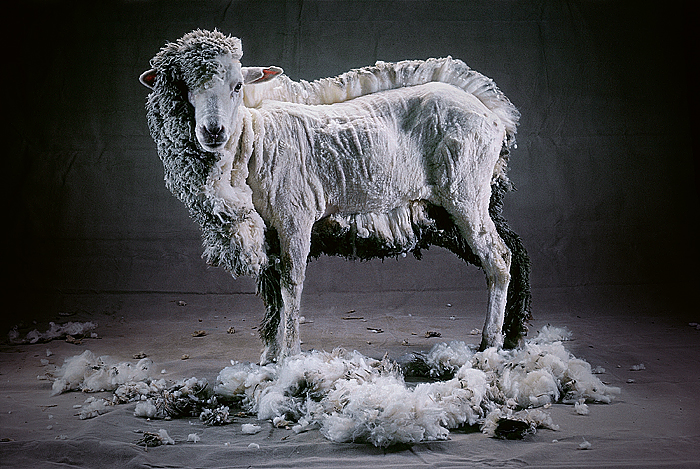 The case history of Cary Wolinsky’s image of a half-shorn sheep illustrates what it sometimes takes to create a special image from an otherwise unsurprising situation. Wolinsky first had to pitch the story—about wool—to the National Geographic editors. He had already done one story on silk (and had four rejections before it was accepted), which went on to be a successful, big feature for the magazine, running 52 pages. That made it easier, but even so, Editor Bill Garrett was not immediately swept away.

“I pitched my ideas before a room full of editors from every department. Bill interrupted me at one point to declare that he didn’t like sheep and ask if I could do the wool story without sheep pictures. I had to think about that for a moment. I told him I didn’t think I could, but I would promise that any sheep pictures I took would floor him. That set the bar high from the start.” The quote is long but worth it; Wolinsky tells it well.

Wolinsky had with him a “gun” (top) shearer, Robin Kidd: “The shed was quiet. The five sheep huddled in the corner of the shearing pen looking like they would very much like to leave. Robin pulled one of them upright so that it was sitting on its rump. The sheep slumped into a catatonic state. Robin grasped the shears then hesitated. He had removed so many sheep jackets as whole fleeces he couldn’t figure out the moves he needed to do just half. He pecked away with the shears. Dirty wool fell all around. Done. He released the sheep. It bounded to its feet, swayed a bit, then toppled toward the still woolly side. The now unbalanced sheep lay helpless on its side, feet bicycling in the air.

“The next try was better planned. A grazier (Australian for sheep farmer) near Melbourne agreed to hold, unshorn, 100 ‘hogs’ (one-year olds) until I arrived. We converted the sheep shed to a studio. I had painted a huge canvas with waterproof paint (easier to clean up) to use as a seamless background. Ninety-nine young Merinos tried to hide behind the one in front as I went about the task of choosing which would become famous that day.

“Shearing sheds are hot, dusty, and, if the truth be known, a bit bloody. Electric shears are similar to those that barbers use but a lot coarser. Under all that wool Merino sheep have loose, wrinkled, ever so soft, and sensitive skin. When shearing a mob of several thousand sheep, shearers don’t waste much time avoiding wrinkles. Otherwise clean, white, nearly naked sheep are spotted with little red shaving nicks.

“As a result the first sheep never achieved stardom. Nor did the second, the 19th or the 27th. We tried shearing them front to back as well as side to side. The well planned, half-day photo shoot was trying the patience of not only the generous grazier but of the 12 motorcycle shepherds who locked arms to create a human fence around each sheep while I attempted to make a picture.

“In the end it was sheep number 30 that became a star. Remembering how my dad temporarily patched his shaving nicks with a bit of tissue (I now use an electric shaver), I took a wad of wool, patched the nick on number 30’s neck and got set up to make a picture. The motorcycle shepherds locked arms. The camera shutter clattered and 72,000 watt-seconds of flash bathed number 30 in light with a happy popping sound.” The picture ran as the lead shot in the magazine.

This is the cover of the latest 2019 edition.

Michael Freeman is a professional photographer and bestselling author whose books about photography have sold millions of copies worldwide. This new and updated 2019 edition features techniques used by some of the most distinguished names in photography along with their images.

The above excerpt from The Photographer’s Vision by Michael Freeman © 2019 (2nd Edition), has been reprinted by permission of the publisher, ilex Press, a division of Octopus Publishing Group, Inc. The list price of the 192-page, soft back photo book is $24.99 and is available at Amazon and other booksellers in hard back, soft back and e-book versions.

Check out Michael Freeman’s website to see his work and get information about his mentoring services and workshops.