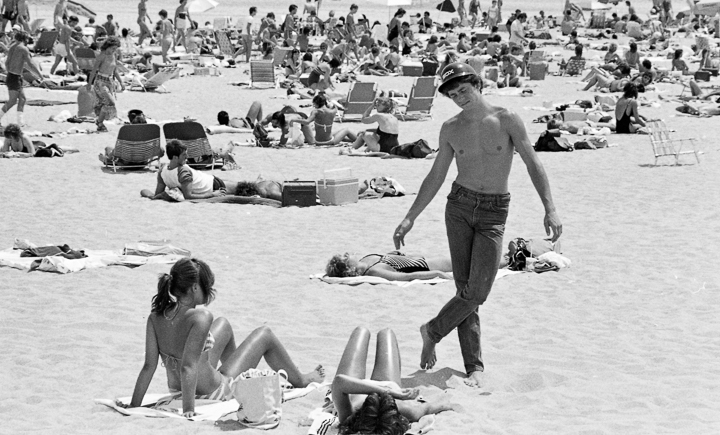 Sand and surf. Babes in bikinis and babies in diapers. Muscular teenagers and spry golden agers. Boardwalks and arcades. These were among my subjects in the summer of 1983 at Hampton Beach, New Hampshire’s largest tourist destination, where I set out to document tourists relaxing, playing, and romancing. 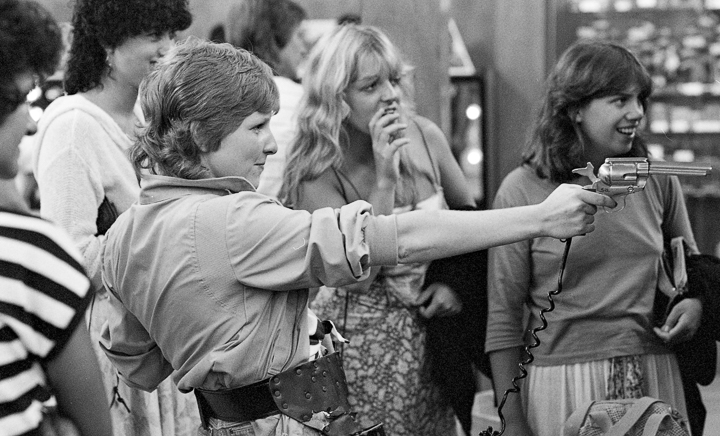 I like challenges so when a friend gave me a small Olympus XA camera, I thought it would be a fine tool for street photography. Skilled street photographers, such as Henri Cartier-Bresson and Gary Winogrand, ignored long lenses, choosing instead to be close to their subjects, relying on normal or slightly wide-angle lenses. They moved along looking for possibilities when composition, subject, interaction between people, and their surroundings came together for a meaningful image. 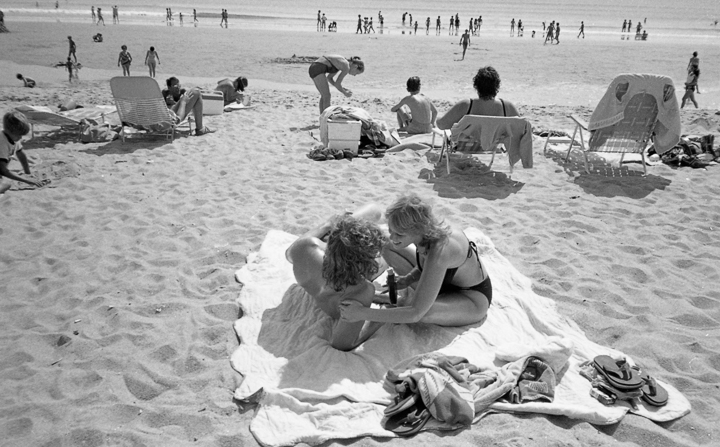 My camera had a f2.8 moderate wide 35mm lens and a thumb activated focusing lever beneath the lens. Small, with a sliding cover to protect the lens, the camera easily fit in my pocket.

About this time both Ilford and Agfa offered a new black and white chromogenic film that could be processed anywhere by machines using  C-41 chemicals. Color negative film is also chromogenic and before digital most everyone used this film to make color prints. Fine grain with a wide exposure latitude, the film was rated at ASA 400 but could be exposed at 800 with little loss of quality. 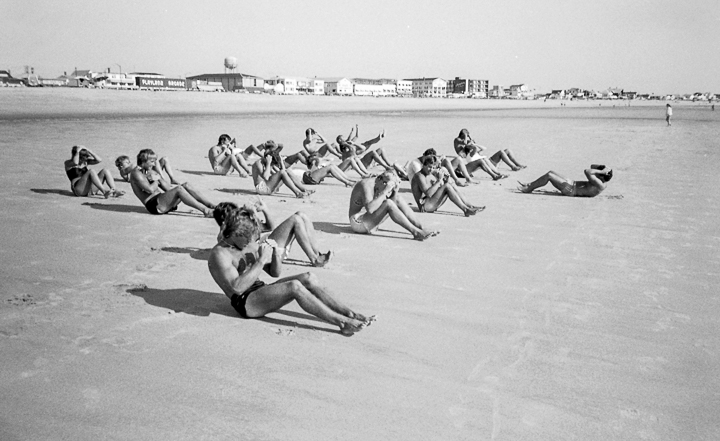 I had been photographing since 1963, working for two newspapers and a magazine as a writer-photographer-editor. In 1980 I authored the first book of New Hampshire color photography. With this background I wrote to both Ilford and Agfa asking for some sample rolls to use in a documentary project. Only Agfa replied sending twenty rolls. My project was underway.

Hampton Beach developed slowly in the nineteenth century with just a few summer hotels, but it became a popular destination in 1899 when trolley lines connected the beach with the large mill cities of the Merrimack river valley. The trolley company built a large casino, which offered food, entertainment, and rental woolen bathing suits to attract hard working millworkers eager for a break in their labors. 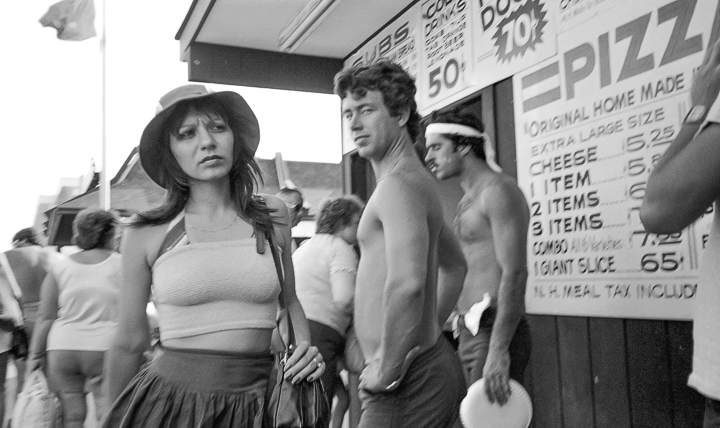 The casino hosted most of the big bands and thrives today with a variety of contemporary performers. Since the 1930s, the sandy portion of the beach is Hampton Beach State Park. A popular destination for one hundred twenty years, the beach now hosts tens of thousands of visitors on summer weekends.

Although I grew up in the New Hampshire seacoast I never spent much time at Hampton Beach, at least not the two-mile section where most of the tourists go. In 1983 I was living in Hampton, so it was easy for me to get to beach any day or time of day. With my little camera I wandered the broad sandy beach, the boardwalks, sidewalks, and the arcades. Almost no one noticed me working and none of the people who did see me objected to being photographed. 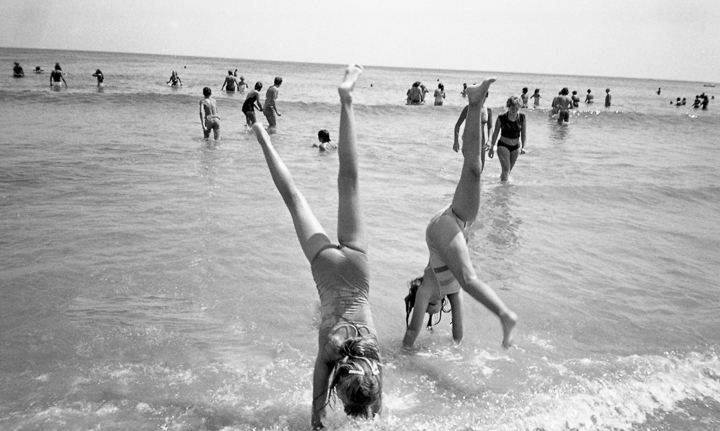 I bought some extra film so by Labor Day, when I stopped shooting, I had more than 700 exposures. My camera didn’t have a motor drive, so mostly it was one shot and move on. I had the film processed, made contact sheets, gave the images a quick review, and filed the work away.

At the time I was expanding my publishing company, writing a history of Hampton, and finishing a book of photographs on Salem and Marblehead, Massachusetts. Hampton Beach was mostly forgotten until this past winter when I began archiving my images. A friend who was assisting me by scanning transparencies and negatives said, “You’ve got to do something with these Hampton Beach photographs.” 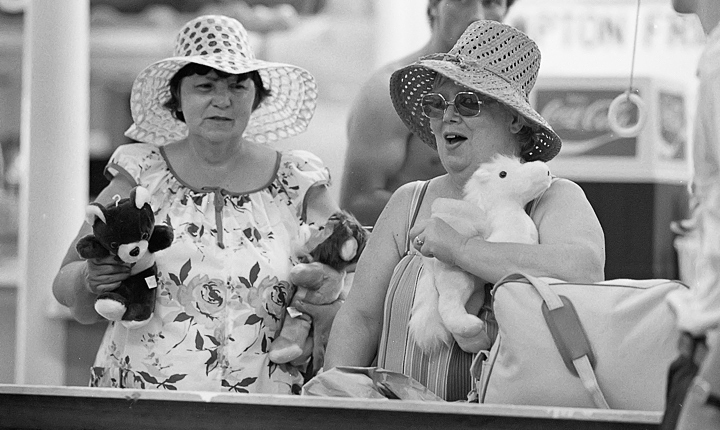 After looking at the images in more detail, I agreed with my friend and began selecting photographs and making prints. I’ve used Red River Papers for many different projects in the past, but for this one I selected Arctic Polar Satin, a lovely coated paper, not too glossy, and heavyweight (See Resources).

Hampton’s Lane Memorial Library has a small gallery space and the month of July was available. The exhibit will run from July 3 to July 29, with an opening on July 9 from 6-8 pm. If you’re in the area, by all means, drop in. 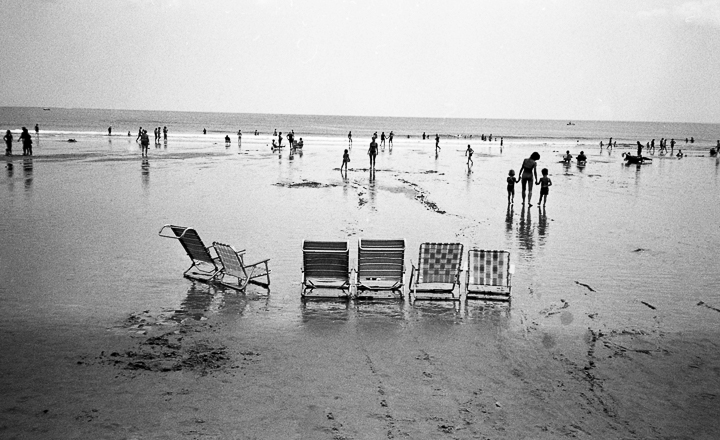 I originally selected ninety images which I edited to about forty for the exhibit, but I had to leave out too many that I liked, so I have also produced a small paperback edition with eighty photographs.

I have shown photographs in many exhibits and in ten books, but now in retirement, I thought my exhibit days were over. Happily, I “discovered” these Hampton Beach images. After thirty-five years, I wonder if any of my subjects will see themselves as they were during those joyful days at Hampton Beach.

Peter E. Randall is a Red River Pro specializing in landscape, nature, and documentary photograph who currently lives in Maine. Most of his images have appeared in magazines and in ten published books of his work.

About 80 of his Hampton Beach images will be featured in a limited edition book, available on July 1, 2019, which  may be ordered at his website for $25.