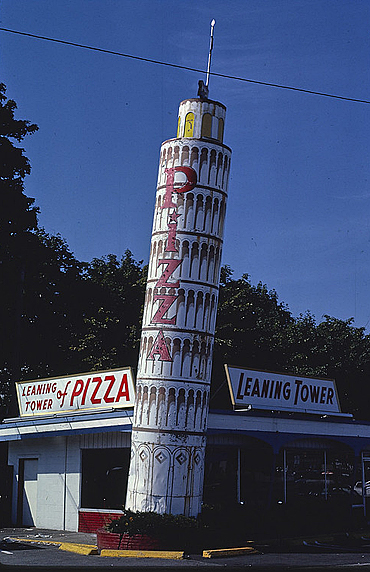 Tooling along in a spiffy, rented Cadillac, John Margolies, architectural critic, author and photographer would take off on months-long road trips throughout America along with his Canon FT, a 50mm lens and a trunkfull of ASA 25 Kodachrome film. It was the 1970s and the new interstate highways were about to bypass the venerable old ones where here and there and everywhere roadside signs and kitschy statues and buildings beckoned for tourist dollars.

Who has not been intrigued by the world’s biggest ball of twine, a WWII bomber perched atop a gas station (easy to refuel), monster dinosaurs cavorting in nearby fields or even a giant fish into which willing customers offer themselves as bait in return for a great seafood dinner. Not to speak of buildings shaped like wigwams, teapots, donuts, and castles, with some giant ducks and flamingos thrown in for good measure. 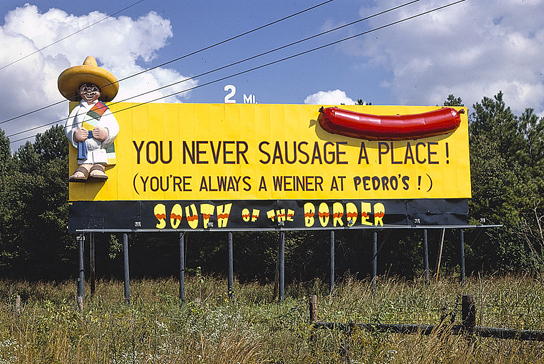 Well, that was John’s thing and lifelong quest– to document roadside America before it vanished because even when he was a little boy growing up in Connecticut, he’d been fascinated by roadside glitz.

“From the time I was a kid,” he once said, “when you drove from southeast Connecticut to Boston, you had a strip called the Berlin Turnpike, which would turn into 45 m.p.h. traffic lights and gas-war gas stations, motels and miniature golf courses and drive-in movie theaters and all of that sort of stuff. My parents’ generation thought it was the ugliest stuff in the world. I liked places where everything was screaming for attention: ‘Look at me. Look at me.’ ” 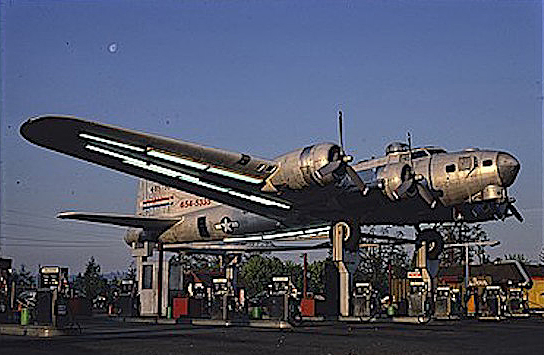 So as soon as he was 16 and could drive, he bought a set of wheels and began touring around. Some years later, with both journalism and art degrees in hand from the University of Pennsylvania, he was appointed assistant editor of the prestigious Architectural Record which gave him a good living.

In 1969, fearful that modernism would eventually eclipse these roadside attractions he loved so much, he began to set out in late spring or after Labor Day, when the roads weren’t packed with cars, to go on four-month safaris to different states, usually shooting his subjects in early morning light.

Margolies was interested in using a “record” approach and eschewed artiness. He photographed most buildings, sculptures and signs straight on to show details– with no people in the foreground and clear skies behind them. If the weather was bad, he would usually wait until it cleared. He was so interested in preserving the country’s vernacular (functional) architecture that he shot close to 12,000 images during his 30-year, 100,000 mile preservation quest. 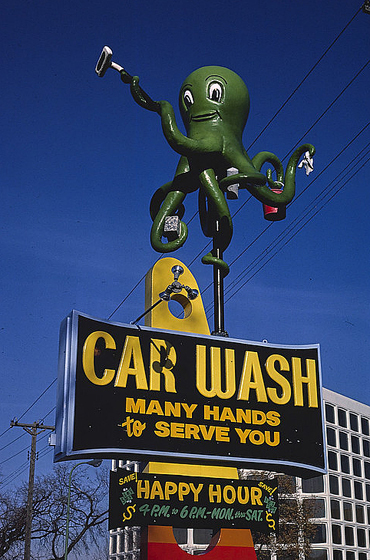 His photography and writing contributed to the post modernistic architecture movement which challenged modern architecture’s habit of ignoring the history and culture of the cities where it appeared. In his photographs, one can see his love for the architecture of the people and, kitschy as it may seem to some, it was beautiful to him because it was whimsical as well as functional.

John Margolies died on May 26, 2016 at age 76. During his lifetime he was the recipient of a Guggenheim Fellowship and received support from many sources, among them the National Endowment for the Arts. His entire collection of images is now in the Library of Congress, where they make for wonderful browsing and are available in various resolutions for downloading and usage, free of charge.

View more images at The Public Domain Review and at the Flickr LOC  site.

Download images in various resolutions at the Library of Congress site.