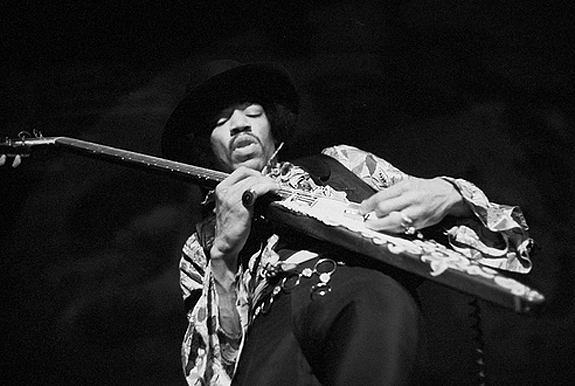 In April 1967, my life changed unexpectedly, and for the better, when I met Jann Wenner—a then twenty-one-year-old freelance writer and student at the University of California, Berkeley. I had been photographing bands for a while in the Bay Area, when Wenner told me of his plans to start a new kind of music periodical. It would become Rolling Stone.

He invited me to join him in his endeavor and I immediately agreed, becoming the magazine’s first Chief Photographer. For two and a half years, my photographs were published regularly and became the graphic centerpiece of the magazine’s layout.

My role as Rolling Stone’s photographer gave me the opportunity to make a living taking photographs, some of which have become immediately recognizable iconic music images of the 1960s. Without Rolling Stone and my position with it, I might never have photographed Jimi Hendrix– on stage or off. 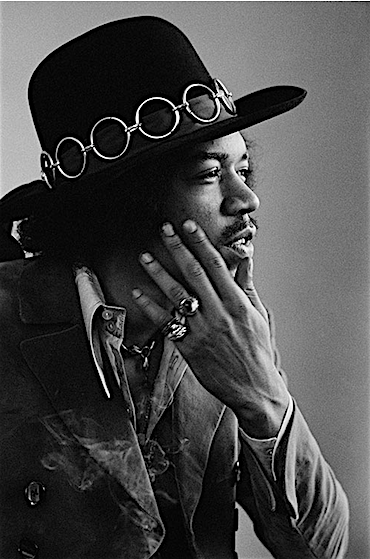 As a photographer I was, of course, concerned with getting the best picture possible. Looking back, it was all a dream experience, but in the moment it was about getting great pictures even if I didn’t necessarily know much about the bands I was photographing. At the time, Rolling Stone was the only window into the personal lives of the bands and their on-stage performances. There was no Internet, no MTV. Rolling Stone was pretty much the only way for fans to learn about the music and the musicians they loved.

One of my early assignments was to cover The Jimi Hendrix Experience at the Fillmore West in San Francisco. Jann said he wanted photos of Jimi in performance and at the time I had an arrangement with the producer, Bill Graham, whereby he gave me full access to all of his shows. I could go anywhere and shoot anywhere, the crowd, on stage, backstage, anywhere – the access was total!

So, I got to the Fillmore early and met up with Jimi and hung out with the guys backstage while they got ready. When they went on to play I just went along with them. I remember clearly shooting them on stage from the side. I was mesmerized by Jimi. It wasn’t so much that I heard his music, it was more like I felt the music and absorbed what he was doing, what the band was doing. Jimi was so active he pulled me into the moment and made me feel so involved I felt as if I was part of the band. 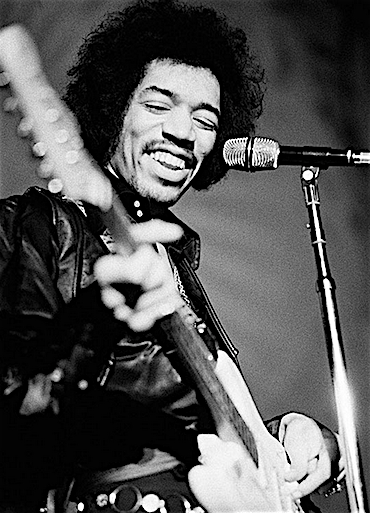 To this day, I identify that concert as a defining moment for me as a music photographer: a magic moment that transformed me into someone who knew how to become a part of the musical experience in a way that made the difference between taking a mediocre photo and a fabulous one. And to this day, more than a half century later, I still believe it was impossible to take a bad photo of Jimi Hendrix.

Just look at how he visually presented himself throughout his life; he was extraordinary and unique and creative, unlike any other musician I had met, a natural and complete artist. As far as I was concerned, every moment around Jimi Hendrix was a perfect photo op.

The band’s music and its visual excitement communicated something extraordinary to the audience. Looking out into the crowd I knew they were high (in a good way) and having the perfect “Fillmore Moment.” Meanwhile, I didn’t realize how loud the sound would be, especially standing so close to the stack of Marshall amps. When I went home it felt like someone had shoved hot knives in my ears and from that day on I would put bits of Kleenex in my ears to protect what was left of my hearing. 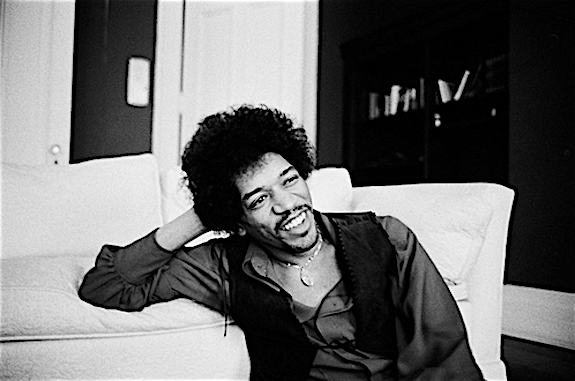 Jann had arranged to interview Jimi for the magazine at his motel room and asked me to come along and make some photos, one of which ended up on the cover of Rolling Stone Number seven. What I found interesting that day was how calm and relaxed Jimi was. He was a quiet talker, you almost had to lean in to hear what he was saying during the interview.

He mostly sat still in the room and you can see from the photos I took how he gestures and expresses with his hands. When he spoke he was articulate, intelligent, and politically aware, and I immediately realized how socially conscious he was for a young man of twenty-five. 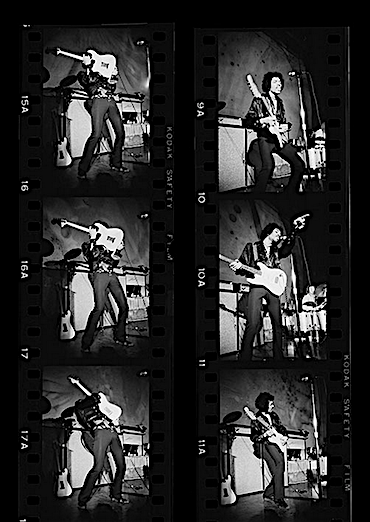 In the early days I had a darkroom in my house where I would process my own film and make contact sheets which I would then bring over to the Rolling Stone office. Jann and the art director would pick the photos they liked best then call me up and tell me which photos to print.

For most of Jimi’s covers I printed the photo they liked on thin photo paper because they had to carefully cut it out by hand with an X-Acto blade. You really cannot underestimate the importance of X-Acto knives in those days. When you look at the cover you can see what a great job, they did– perfectly cutting around Jimi to put him on the white background to make space for the cover lines.

In 1970, two years after I had photographed Jimi on stage, I shot him and his band members during another interview at his manager’s apartment in New York. By now, he had become incredibly famous, but to me, at least, it seemed that fame had not changed him all that much. Like the many other times he was easy to photograph and happy. His success never seemed to go to his head. 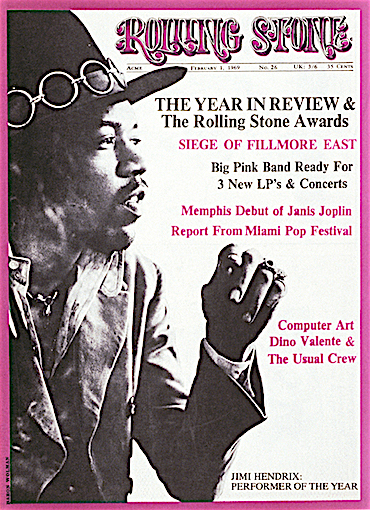 I remember listening to him talk and being struck by how he considered and articulated ideas in a much deeper way than the typical rock and roll musician. He would talk fluidly about the state of the world, the difficulty of being black, the many challenges of being black in a white society; even about the rumor he was joining the Black Panthers. He was a creative person in every way.

And then, just a few weeks later, he was gone. What a shock! He had so many creative musical plans for the future. However it happened –and there is still much controversy over the event– his passing was incredibly sad. It was an artistic tragedy of major proportions.

I often think about all the people who live on and get to realize their potential. And then there are folks like Jimi, Janis, Jim Morrison, Amy Winehouse, Kurt Cobain, Pigpen – all of whom died around the same time in their lives. Each was only 27, had barely begun their careers. It’s just so heartbreaking to think about the losses, both of the talent and the loss of their artistic productivity.

I photographed a lot of artists performing live, but my collection of Jimi concert pictures is by far the best. When I put my memorial-to-Jimi book together, I decided to include signed 8×10 photographs with them, almost 1,000 of them printed on heavy, Red River UltraPro Luster 300 paper.

When I look at these photos I still feel the magic of being in that moment on stage with my cameras, capturing the members of the Jimi Hendrix Experience at the height of their powers. I don’t ruminate much on the past, but I feel blessed to have lived through that time. The music truly reflected what people were feeling and hoping for– peace and love were real concepts.

There is so much violent music today because violence is endemic to our modern culture. Back then we all felt hope, we felt that the peaceful changes we wanted were finally taking place, and that was truly the definition of the 1960’s. We were getting away from the bullshit of the past and everything felt good. There was so much to be experienced everywhere just walking out the front door. It was an incredible time and place to be alive.

Visit Baron’s website to see more of his work and purchase prints.

Contact him at [email protected] to order the Jimi Hendrix Collector’s Edition which includes a hand-signed print (valued at $300) and many extras. These editions are selling for $250 and are available to Red River Blog readers at a special price of $150 including shipping to anywhere in the U.S. Be sure to mention the Red River Blog to get this extraordinary discount.

Original signed prints that accompany the book were made with Red River Paper UltraPro Luster 300 which has an excellent tonal range and stands up extremely well to handling.