Home » Photography » Jules Aarons: Mind of a Scientist, Eye of an Artist

Jules Aarons: Mind of a Scientist, Eye of an Artist 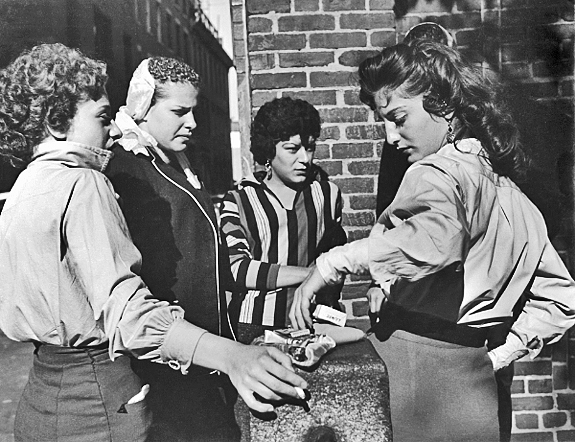 By day Jules Aarons worked as an astrophysicist, unraveling mysteries of celestial communications; weekends he roamed Boston’s West End, photographing its vibrant street life; nights found him in the darkroom, transforming his images into works of art.

When he died in 2008, at 87, Aarons had made his mark; both as a space age pioneer and a documentary photographer who’d taken thousands of stunning street pictures over a span of three decades. Though he had the mind of a scientist, his eyes were those of an artist.

Born in the Bronx, NY, in 1921, he graduated from City College with a science degree in 1942 and spent the war years of 1943-1945 as a radio and radar officer in the (then) Army Air Corps. After his discharge from the military, he signed on as a scientist at the Air Force Cambridge Research Laboratory facility in Lincoln, MA, a stone’s throw from Boston. 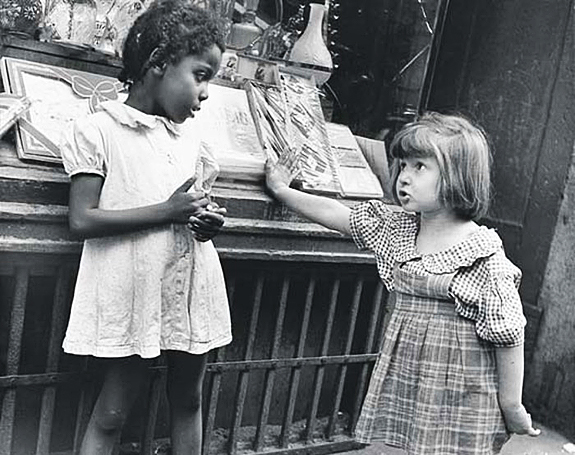 Aarons had always been interested in photography and it soon became a remedy to relieve the stress of his intensive work on ionospheric radio wave propagation during the Cold War.

He became enthralled with the West End of Boston– the vitality of life that swirled through its streets and alleys drew him in; he began meandering through neighborhoods teeming with Italian, Jewish and Black families, shooting images of ordinary people just living their lives. In the basement of his home in nearby Newton, he’d develop and print his work.

He  first picked up a camera when he lived in New York but had used it mostly to shoot pictures of buildings and sites. Yet even then he was aware of the power of the medium; the work of Brassai, Cartier-Bresson, Lisette Model and others who often depicted the lives of the downtrodden was quite familiar to him. But when he began to photograph life in the streets of the West End, he decided on a different approach. 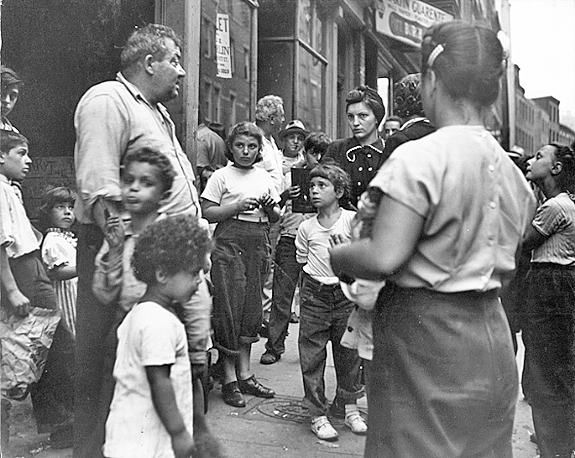 “I resolved to capture the day-to-day life experiences of the people, avoiding scenes of poverty,” he wrote in his notes. “I knew that the dynamics of people whose social relationships involved their neighbors and the streets could be a source of creativity. I developed an interest in groupings of people and in the design of people against their physical environment. In populated streets I could move into a group and continue to take photographs while they were saving their thoughts, while they showed their affection, and while they were talking.”

Unlike most of his contemporaries who were shooting with 35mm cameras at eye-level, Aarons chose to use a twin-lens reflex camera– first a Ciro-flex, then a Rolleiflex. “The waist-level position allowed me to point my body in one direction and the camera in another,” he recalled. “It was important to me not to personally intrude on the scenes which ranged from card playing in the streets to adults talking to one another. The subjects did not always know the photograph was being taken.” 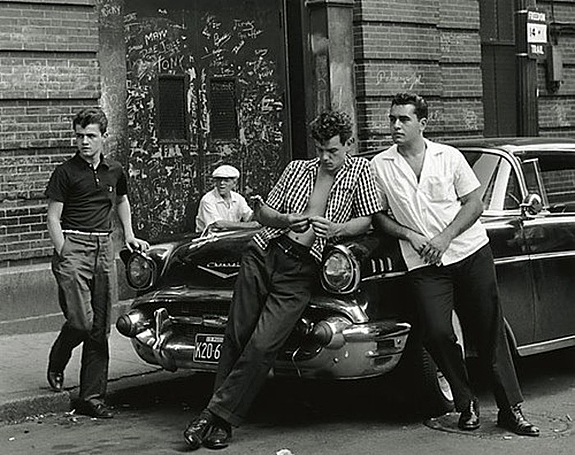 He also felt the larger negative size yielded finer detail and allowed for more precise manipulations in the darkroom, such as, “for example, bringing an element to the fore in the case of graffiti in the inner city or losing it when depicting shadow patterns at an elevated train station.” And he was a consummate printer.

Aaron Schmidt, who curated an exhibit of Aarons’ work for the Boston Public Library in 1999, can attest to that. “It’s really the printing that puts him over the edge and makes him a fine artist,” he says. “In the hands of a master like Jules Aarons, darkrooms are magical. More work goes into the darkroom side of the photograph than into the exposure side.” 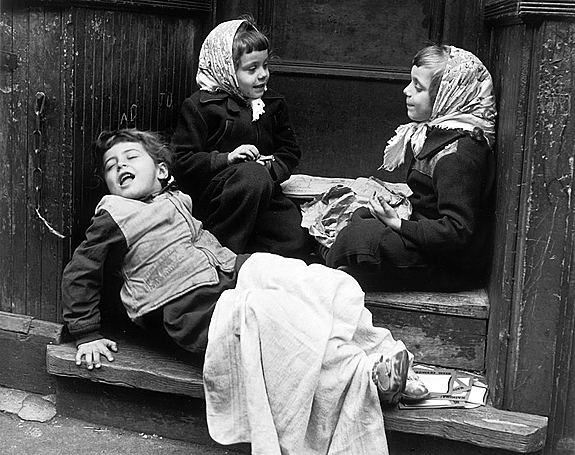 Philip Aarons, now 69, used to join his dad in the darkroom and remembers the magic to this day. “You’d see the final image of those great photographs come to life out of the blank paper– it was really remarkable. I loved working side-by-side with him. He was so passionate about the work he did, that for me, it was just a great education and a great way to spend time with my dad.”

Street photography sometimes gets a bad rap, but according to Schmidt, Aarons’ street photography is a very humanistic genre of photography where the photographer is trying to show that these people are important. “Just because they live in a city and they’re working class doesn’t mean that their life doesn’t have value and that they can’t be a subject of great art.” 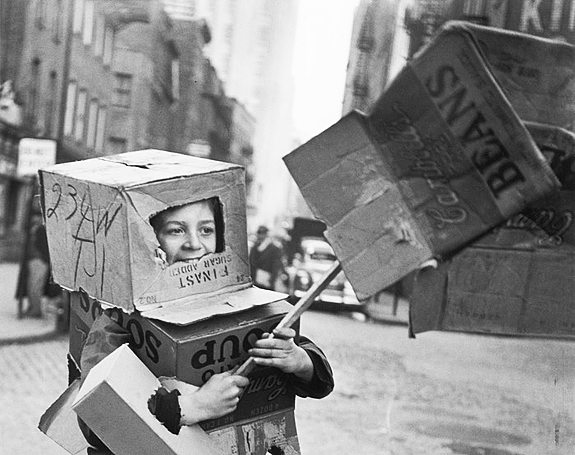 By 1953 the West End of Boston was targeted for urban renewal and ultimate destruction. Aarons’ days there were numbered and he shifted his focus to other areas of the city, finally concentrating on the North End. He continued his work there until 1975, photographing its mostly Italian population which he recalled as being very dynamic. “I photographed the open-air market on Saturdays, people conversing in the streets, the boxer Tony De Marco, and religious activities. I was able to capture the older people, children and parents, teenagers horsing around, kids playing ball in streets, families, and men getting together on street corners on Sunday morning.”

Aarons quit photography in 1981. He’d become sensitive to photographic chemicals and though he could have hired a technician to print his images, he felt that doing it himself was an integral part of his work. “Without my ability to control this part of the process,” he wrote,” I felt I should not continue.” 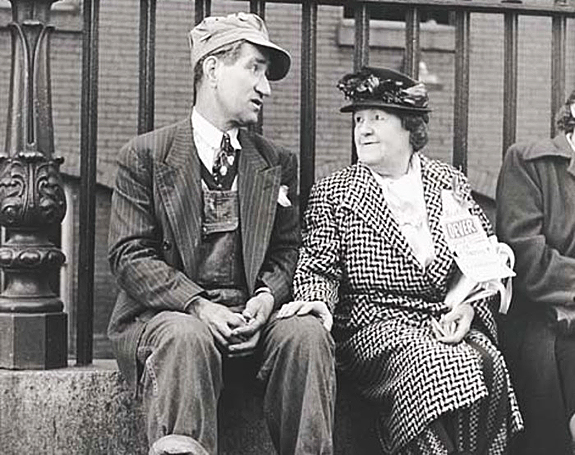 But there was also another reason. It had become more difficult to shoot pictures on the street due to a growing public paranoia about photographers. “It is not always unwarranted,” Aarons noted. “Is the photographer interested in me particularly and if so, why? Could the photographer’s purpose not be benign?” By 1970 he began encountering more and more of  this kind of resistance, and eventually threw in the towel.

Jules Aarons’ artistic slices of city life in other times and places endure. “I think one of the fundamental things about him was his deep love of humanity,” recalls Philip Aarons. “He was fascinated by the way in which people presented themselves– out of their homes, into the street, in ways that were sometimes dramatic and joyous. His love of people showed itself in all of his photos and he wanted to emphasize, preserve and embrace the way people were able to present themselves to the world in a positive and dignified way.”

Jules Aarons’ prints are available from Gallery Kayafas, Boston; visit their website to view more of his images.

At Aarons’ website you can learn more about his life and order books of his photographs, which are priced very reasonably.