It’s 2011. On a jumbo jet 36,000 feet over the Pacific headed for New Zealand, night has fallen, the cabin lights are  dimmed and most of the passengers have dozed off.

Nina Katchadourian  slips quietly out of her aisle seat, cellphone in hand, and makes her way down the aisle to one of the lavatories.

She’s on a mission in conjunction with a project she’s titled “Seat Assignment” and tonight she’s going to capture some images. In the lavatory? Yep, that’s her sky high portrait studio and most of her props await her there– disposable toilet seat covers, tissues, towels, and more. Aw, c’mon, what’s this all about?

It’s about how, despite being in a confined space, such as the current lockdown we’re experiencing due to the Coronavirus, creativity can blossom and  we may need less than we think to make great images and artwork. After she locks the lavatory door behind her, Katchadourian –now 52 and a renowned multi-media artist and professor living in Brooklyn, NY– places her phone on the sink counter and begins to compose her shot, emulating the look of Flemish portraits done by artists who painted in and around what is now Antwerp, Belgium during 15th century.

Begun in 2010, the project is still ongoing and more than 275 flights later (90% are for projects or to teach or lecture about her work), she’s captured thousands of images in addition to her portraits, many of which are composed using in-flight magazine images altered with snack food, reflections on seat belt buckles, junk left by other passengers and more. Her work has been featured at exhibitions in museums and galleries worldwide and her whimsical style always draws smiles from attendees.

But it goes deeper than mere whimsy. “I use humor as a device very knowingly,” Katchadourian explains, “a kind of bait that makes people feel welcome and then draws them close to the work. And then I have the opportunity to actually make a point about something. Humor is sometimes the only way to speak about intensely serious things.” 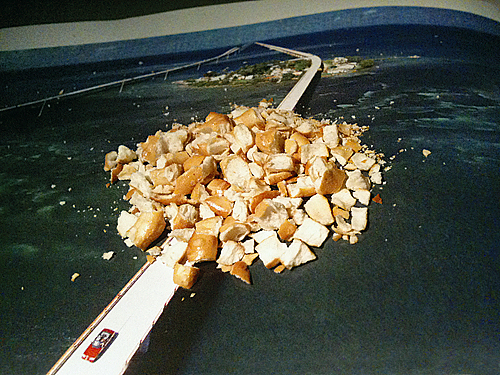 Her series of Flemish style portraits went viral and she’s often asked how she created them and the many other images that followed. “The rules of engagement are that I only work with what I naturally have with me and what I find on the plane,” she says. “I’m not allowed to bring complicated props and things that skew the project too much towards something that I may as well have just made in my studio.”

She goes on to say it’s important to work within the limitations of the airplane’s space and with materials that are part of that environment which includes stuff in her carry-on bag like things to read and snacks to eat that she’d normally have with her on a flight. 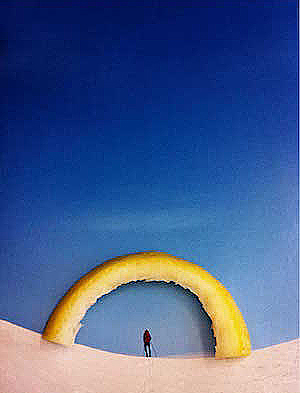 “The things I used to dress myself up with for the portraits were, for the most part, found in the lavatory. They’re the paper towels, the seat protector covers and more. Sometimes,” she recalls,” I put eight or 10 of them over my head and crinkled them up to kind of make this lace collar, sort of something that looks like a lace collar. I took the pillow case off the little airline in-flight pillow and put that on my head as a hat at one point. I have a black scarf I travel with and I took that with me into the lavatory and draped it up behind me, which makes for this deep black background to some of the pictures. And then, I’m wearing a black T-shirt which is what I often wear. But I didn’t bring anything that would be too much of a prop. That’s the rule.”

After completing the Flemish-style portrait series, Katchadourian has continued through the years to busily create art work at her seat whenever she flies– the project is ongoing. 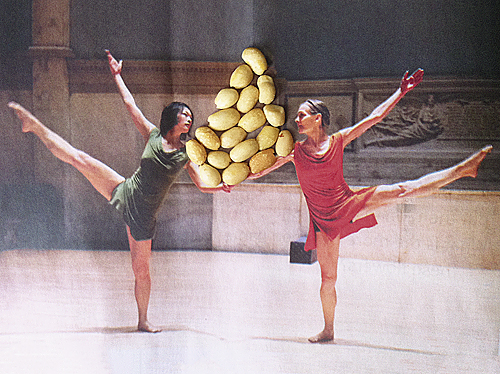 “Sometimes I’ll have all kinds of things on my tray table­– pretzel crumbs and pictures from the in-flight magazines, and I’m rummaging around with these things. The question that’s always in my head is: ‘What else could be done with what’s here?’  It’s my way of observing the world. It’s this idea of trying to look for things I haven’t noticed before. Sometimes in doing that a seed of an idea may surface.”

One of those ideas flashed into her mind one year on a flight just before an anniversary of 9/11. “I had these cookies called Manner wafers,” she recalls, “and I looked down on them on my table and thought, ‘Oh, my God, it looks exactly like the Twin Towers.’” 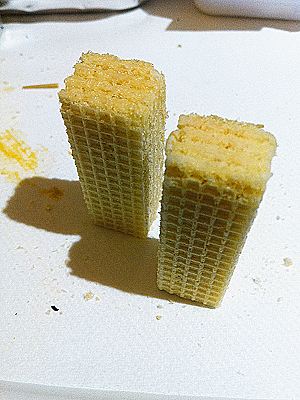 When she’s working at her table, people usually ignore her. “Nobody ever asks a question,” she says. “It’s amazing. Mostly, I think, they are trying to ignore me. They think I’m some slightly odd lady.” But there was one flight, she recalls, that was a bit different.

“Once I was on a flight back from London with very small seats, and I sat between two large people. Working on my tray table was especially stressful because they could totally see what I was doing. At one point the woman on one side gave me this horrified look when she saw me trying to make something using sugar and a picture from the airline magazine. Then the guy on the other side, once I’d finished working on one thing and started on the next, said, ‘I think the first was turning out better.’”

Katchadourian uses only her cellphone camera. “And that is very important,” she says,” because although I would make life a lot easier for myself using a proper camera –I’d have a lot more resolution to play with–  I think that would draw attention to what I’m doing in a way that would turn it artful. I’m much more interested in looking like someone who’s just bored and trying to pass the time messing around with her phone. It lets me get away with a lot more.” 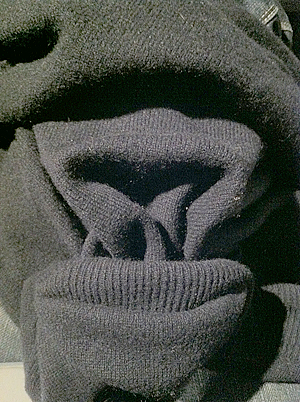 She says she’s always pushing on the question of what she can do in a situation where it seems like there are no materials, no space, nothing interesting, not enough time, no privacy– a situation of scarcity spatially, mentally, temporally, and physically in every way.

Which brings us to the present. With time on your hands these days and very few places to go, you might want to try doing some creative photo art projects with just what you have at hand. In fact your kids (if you have any) might eagerly join you at it. If so, here’s some advice from Katchadourian:

All images from the project “Seat Assignment” (2010 and ongoing). Images courtesy the artist, Catharine Clark Gallery, and Pace Gallery.

See more of Nina’s Flemish portraits and many other creative works, including videos, sculpture and more photography at her website.