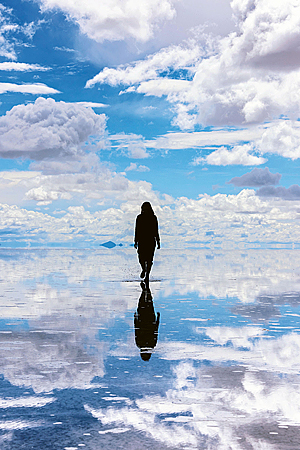 Because of rain and melting ice from the surrounding glaciers, the Uyuni salt flat in Southern Bolivia is a giant mirror made of a few inches of water. This is Cloud Cuckoo Land.

It is easy to forget that you live in the sky—not beneath it, but within it. Our atmosphere is an enormous ocean, and you inhabit it. This ocean is made up of the gases of air rather than liquid water, but it is as much of an ocean as the Atlantic or the Pacific.

You may think of yourself as living on the ground, but all that means is that you are a creature of the ocean bed. You still inhabit the atmosphere like a sea creature does the water.

“It is a strange thing how little in general people know about the sky,” wrote the Victorian art critic John Ruskin. Strange indeed, given how important it is to us. One reason for this might be that the sky is always there. It is the ever-present backdrop to our lives, and anything as ubiquitous as this is easily missed because it hides in plain sight.

We at the Cloud Appreciation Society believe that you would do well to pay more attention to the sky. Having your head in the clouds, even for just a few moments each day, is good for your mind, good for your body, and good for your soul. 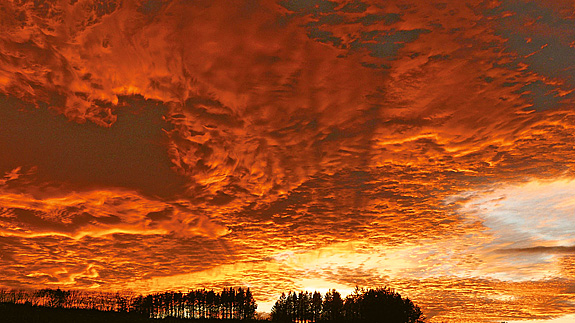 “The first step to wisdom,” as the biologist E. O. Wilson noted “is getting things by their right names.” Learning the names for a few of the different cloud types is a good way to start a new relationship with the sky. Every cloud is unique, but we humans love to put things into groups and so we gather their chaotic forms according to ten main types, known as cloud genera. You might have learned some of them at school—names like Cumulus, Stratus, and Cirrus.

There are also many subcategories of cloud. These cloud species and varieties and cloud features crop up here and there among the main types. Some of them are rare and fleeting, and you have to really pay attention to the sky to be able to spot them. 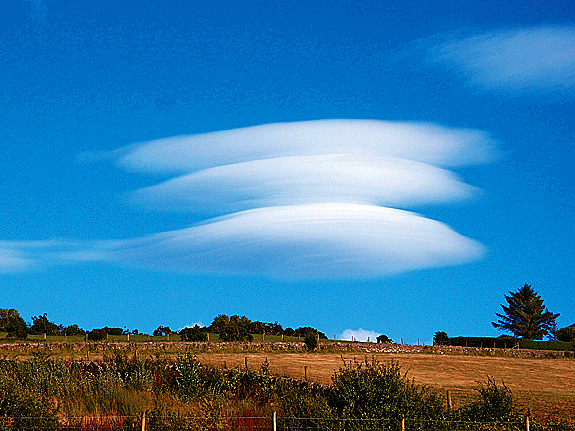 The Latin names sound formal, but they are mostly just based on how the clouds look—on their shapes—and you certainly don’t need to remember Latin terms to enjoy finding shapes in the clouds. You might remember doing this when you were young. Back when you had time on your hands, when the only deadline was bedtime, and your imagination could float free.

Finding shapes in the clouds is how most of us first become interested in the sky. There is an aimless pleasure to this side of cloudspotting, one that feels nostalgic. The early age at which this relationship with clouds is first forged might explain why our feelings about clouds and the sky run deep. But once we have grown up, this aimless pleasure of youth feels frivolous. We’ve no time to sit around gazing at clouds. 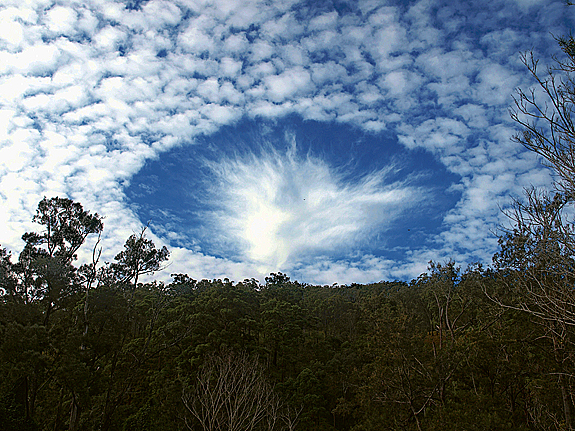 So why when you speak to someone who, for whatever reason, knows their days on Earth are numbered, do you often find them saying that the sky, the transient, ephemeral, ever-changing clouds, feel more worthy of their attentions than most of the stuff we spend our days worrying about? Just because something is aimless doesn’t mean that it is pointless.

So find the time, every now and then, “to make the shifting clouds be what you please,” as the poet Samuel Taylor Coleridge put it You will be engaging the idle mode of your brain—a mode that has been effectively eradicated from our daily lives by device culture—because cloudspotting legitimizes doing nothing. 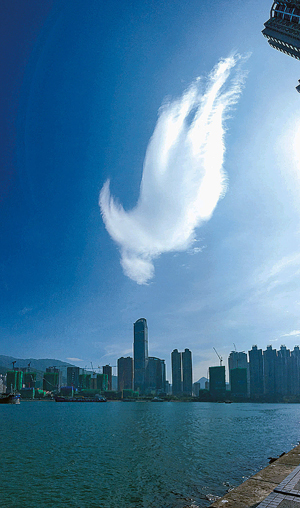 An Altocumulus lenticularis cloud, spotted by Terrence Pang as it takes a dive into Hong Kong’s Victoria Harbour.

You’ll be freeing your imagination and reminding yourself to stay lighthearted. We all know clouds can have a profound effect on our moods. No wonder, then, that they are the tool artists use to introduce feeling to a landscape painting. The 19th-century Romantic painter John Constable argued that in any landscape painting the sky is the “chief organ of sentiment,” the “key note.”

To tune into the sky is to slow down. Clouds may be in a state of perpetual change, but it is one that, more often than not, appears gradual. They might in fact be moving quite fast—ice crystals in the high, sweeping streaks known as Cirrus can blow along at speeds approaching 300 kilometers (200 miles) per hour—but they appear to change gradually because they are a long way away.

So you can treat cloudspotting like a moment of meditation, a meditation on the sky, which dif‍fers from other forms in one important regard: What you are concentrating on, the sky, is beyond your control. You cannot plan your cloudspotting for a specific duration, schedule it for a certain moment in the day. Cloudspotting is a frame of mind more than a planned activity. When the sky puts on a show, you just have to be prepared to pause what you are doing and engage with it for a few moments. 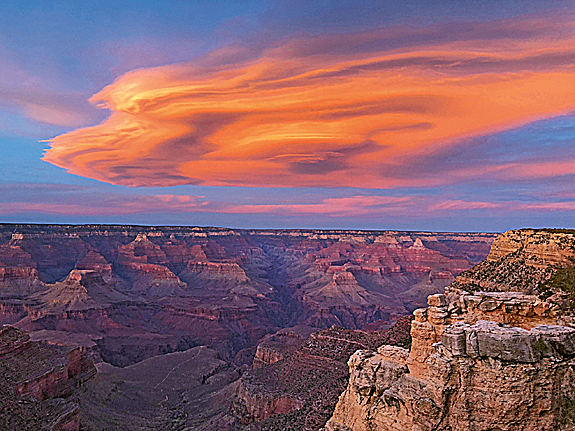 A formation of Altocumulus lenticularis over the Grand Canyon in Arizona spotted by John Bigelow Taylor.

Clouds are the embodiment of chaos and complexity. Why do they change so unpredictably? What accounts for their dynamic, ever- shifting forms? The answer is a simple one. Clouds change appearance so much because of the unique qualities of water. It is the only substance on our planet that is found naturally in the three states of solid, liquid, and gas. Nothing else on Earth (or above it) shifts between these states with such ease, ushered along by just the slightest changes in temperature.

And one of the three, the gas state of water, is invisible. It is known as water vapor, and it is transparent. So a subtle warming or cooling of the air can be enough to choreograph the magical dance of water from invisible to visible, from transparent gas to a solid-looking array of droplets or a translucent streak of ice crystals. 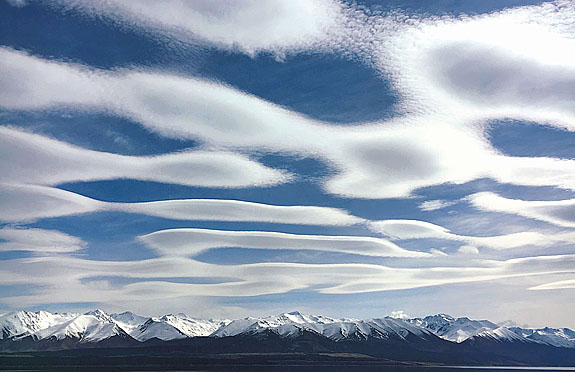 We see clouds because their particles reflect and scatter the sun-light. And sometimes when they do so, if their droplets or ice crystals are just the right sizes, shapes, and orientations, they can bend and separate the light to form a whole range of arcs, rings, bands, and spots of color.

Each cloud is a tap on your shoulder, prompting you to look up, take a breath, and unfetter your thoughts from earthbound concerns. It is there to remind you to look around you, look above you, and appreciate this ever-changing ocean of air that we all inhabit and share. 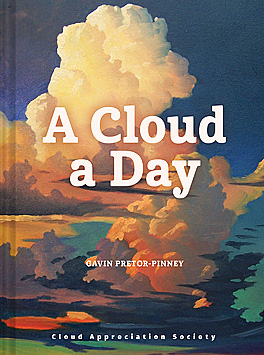 This article is an abridged version of the introduction to A Cloud a Day by Gavin Pretor-Pinney, published by Chronicle Books and is reprinted by permission of the publisher. Neither text nor images may be used without their express written permission. A Cloud a Day—Hardcover, 368 pages. Available at Amazon  for $16.69; ebook version $9.99.

Highly recommended and also an excellent gift choice for a young person interested in photography, art or science. In addition to its more-than 360 gorgeous, color, cloud images (which have detailed captions), there are tables, charts and snippets of literature, poetry and art interspersed throughout the book.

It will inspire you to  grab your camera or easel and bag your own clouds. Then join the Cloud Appreciation Society and share them with more than 50,000 members from 120 different countries throughout the world.

Check out the best Red River Papers for landscape, nature and cloud photography.