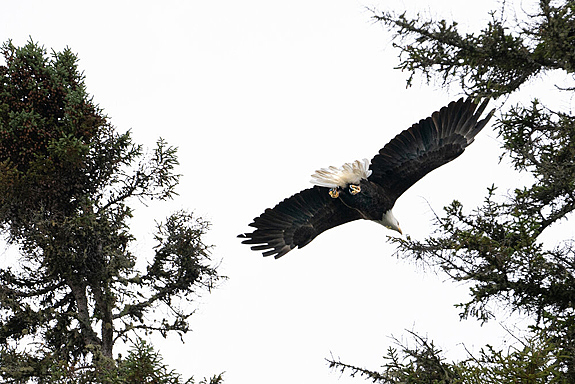 The first half of my trip was leisurely paced down the West Branch of the Penobscot and I had time to enjoy and photograph much of the river’s wildlife including an industrious beaver who simply ignored me, an inquisitive moose, and low flying eagles that soared by.

And then there was the peculiar jack rabbit who paddled out in the shallows and hopped onto a protruding rock. As I approached, he seemed unconcerned by my presence. Perhaps he was chased out there by a coyote prior to my arrival and was still in a state of shock.

Whatever, I took advantage of my willing photography subject and offered him a carrot, but by that time, he’d snapped out of his trance-like state and sprang from the rock headfirst into the river, paddling his way to shore before hopping off into the forest. 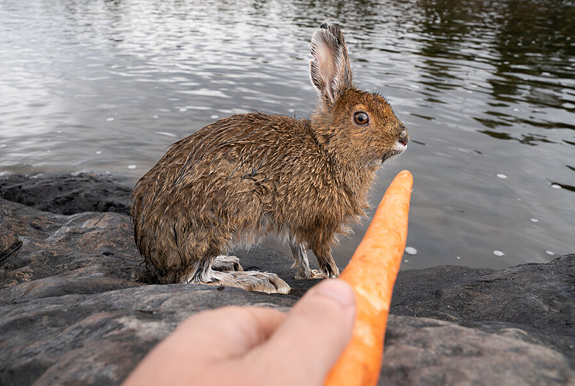 When I eventually reached Lake Chesuncook, the rain and wind began to pick up. The water became choppy with howling winds and rain hammered me straight on while large white caps kicked up across the surface. I had to adopt a considerably more aggressive paddle stroke because the wind was pushing me onto a rocky shoreline that stretched on for the first couple miles of the lake. After I cleared the rocks, a couple of sandy points came into view and I landed on one of them, quickly unpacking all my gear and dragging my canoe out of the turbulent water. Obviously, there was no time for pictures while I was in survival mode.

On arising the next morning, I found that the winds had reversed direction overnight, pushing the waves towards my destination which would allow me to move along swiftly, riding them. This was a pleasant shift from the head on battle I had the day before; I experienced a cathartic moment where I felt very connected to nature.I had been tested and Mother Nature decided to reward me with a helping hand for having remained resolute. This was a double-edged sword, however. With the help of the wind, I was saving precious energy, but it was becoming increasingly dangerous. 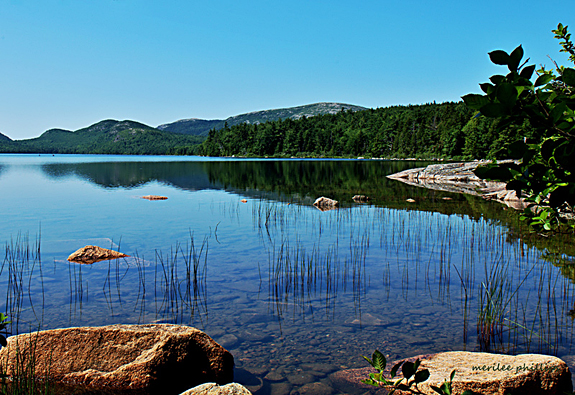 As you can see, even when calm, the shoreline of Lake Chesuncook is hazardous. When these rocks are concealed by roiling waves it can turn deadly. Image Courtesy “See Maine.”

The winds increased their intensity as I approached a jagged peninsula jutting into the lake like a wolf’s fang. I had to once again employ a maxed-out paddle rhythm to avoid what I eventually nicknamed Widow’s Point, and which I cleared by only a scant 15 yards to my right.

The waves were becoming uncomfortably large and if I were caught parallel to them, my canoe would surely roll over. I found it best not to look behind at the approaching monsters; instead, I shifted my body weight in harmony with their rise and fall, working the paddle like the tail of a leopard to balance the boat in union with the elements.

My previous feeling of Mother Nature’s embrace shifted at first to a feeling of naivety, then to what you might call a tough love understanding. While none of us enjoy being in uncomfortable situations, least of all life-threatening ones, I felt as though I was being offered a path of challenge and growth. One must ebb and flow with the elements, find the rhythm of the dance, and endure. 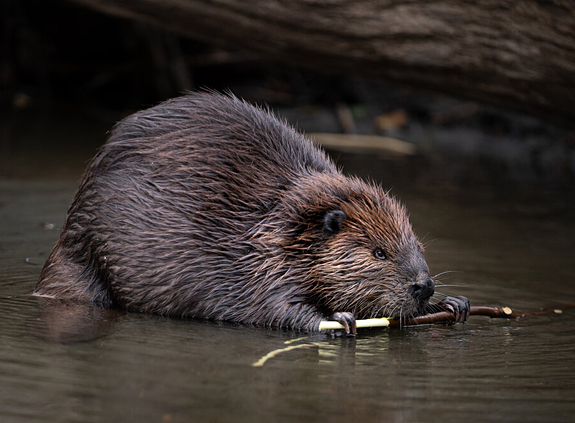 This was a special journey for me. I encountered some near death situations where I was tested both physically and mentally. To me, this is what spiritual growth and development is about. Removing myself from the comforts of society and seeking out a foreign and uncomfortable environment led to a unique learning opportunity, for which I’m very thankful.

EDITOR’S NOTE: Zac has created two videos exclusively for Red River Paper that explain how to select “keepers” from hundreds of images you’ve taken, how to select the correct paper for making prints that will be viewed under different conditions, printing tips, preparing your prints for exhibition and much more.

Here’s how Zac suggests you determine the best paper for you.

“When I first got stared in printing, I was overwhelmed by all the paper choices and I found that the best way to get a feel for the different textures and glosses was to order one or more sampler packs from Red River and print the same image on each of the different papers. Even better, create a composite image in Photoshop with a black and white image and a vivid color image, side by side, then print that pair on every different sample sheet surface.

“Next, you need to live with those prints for a while to get a feel for them. Spread them out on a table, hang them up, become intimate with them, let them speak to you and you speak back, until you develop a relationship where you can make you own informed creative decisions when it comes to printing and paper selection.”

Zac Durant grew up close to nature on the banks of the Shawsheen River in North East Massachusetts and spent much of his early years canoeing the wilderness along the winding river.

After receiving dual degrees in philosophy and chemical engineering in 2012 from University of Massachusetts, Lowell, he established a career in the bio-tech industry. Four  years later, he discovered a new passion for photography.

Since then he’s used both photography and video to document his solo wilderness expeditions and uses Red River’s Palo Duro SoftGloss Rag  papers exclusively for his large-print exhibits.