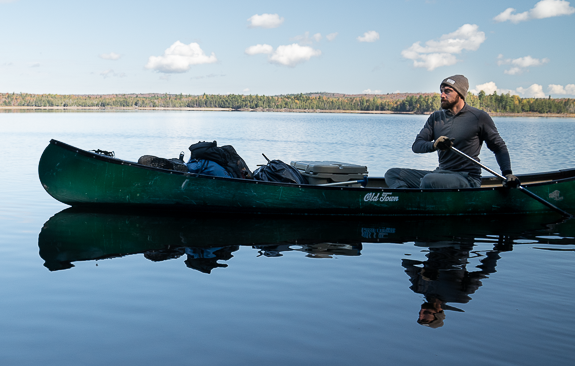 The fierce intensity of the wind had carried my canoe out to the middle of the huge lake, where white caps were threatening to capsize it. If it were to succumb to the turbulent waters, I would not be in a very favorable situation. The water was cold, and I was at least a half-mile from shore. While I’m a capable swimmer, I didn’t like those odds very much…

It all began in August, 2020 after I’d done a previous solo canoe trip the year before down Maine’s Allagash River. I was longing for another adventure. There’s something spiritual about immersing yourself in the natural world. Void of human presence, the raw solitude has a cleansing effect on the mind and body. The vast open waterways, crisp clean air, abundant wildlife and a calming sound palette make for a special experience. 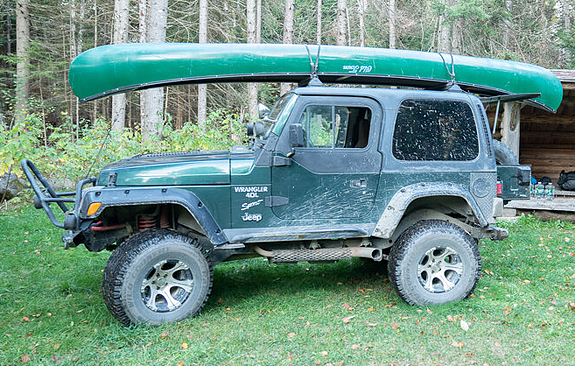 At first, I had difficulty finding a canoe to rent but I finally secured one. Image © Zac Durant

My intention was to re-visit the Allagash again but water levels were unusually low—making it unsuitable for travel without some lengthy portages and, while I like a good challenge, carrying a 60-pound canoe and 120 pounds of gear for more than 10 miles didn’t really appeal to me, So I’d have to make another choice and solo canoeing the Penobscot River in October seemed to be a good one. At about 350 miles in length, it’s Maine’s longest river.

Navigated by English voyagers in 1603 and by Samuel de Champlain in 1604, the river was named for the Penobscot Indians. Its valley became a bloody battleground for the French and British between 1673 and 1759 and for the British and Americans until 1815. Archeological evidence of fish bones found in native settlements shows that the Penobscot Natives fished for American shad as long as 8,000 years ago, and for sturgeon 3,000 years ago. 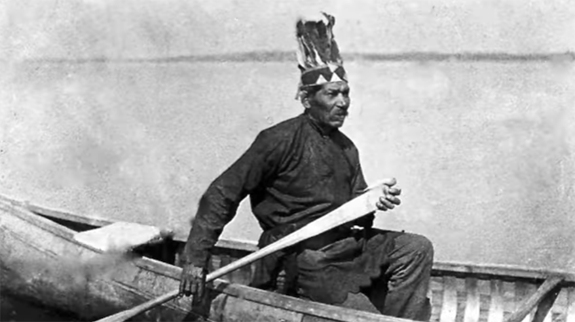 A Penobscot man paddles a birchbark canoe down the river in the late 1800s. The Penobscot Reservation is near Old Town, Maine.

The subsistence fishing culture continued for generations, even as commercial fishing techniques evolved. But by the early 1900s, impacts of logging, dams, and industrial pollution had taken a terrible toll. By the 1950s, the shad, sturgeon, and Atlantic salmon runs once measuring in the tens of thousands essentially stopped.

Fortunately, an extensive dam removal effort was made to reverse the damage by opening access to about 1,000 miles of habitat within the watershed, making it one of America’s most significant river-restoration efforts. Reconnecting the Penobscot to the sea is restoring the health of the river and its fisheries and revitalizing a key part of the Penobscot Indian Nation’s culture. It has also created new recreation and economic opportunities for all the river’s communities. 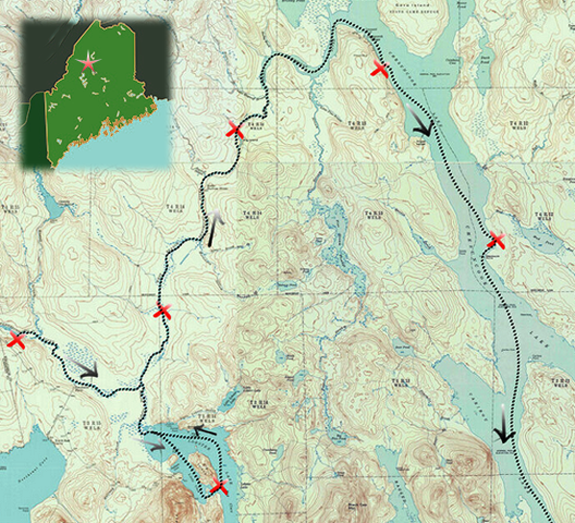 I paddled 70 miles in seven days.

My proposed route was to start just below the Roll Dam Rapids, spend a day on the river, then head upstream on the runoff from Lobster Lake where I’d spend a night and then paddle back out onto the West Branch for about 45 miles. The last leg of the journey would begin at the confluence with Chesuncook Lake, a massive body of water, 1.5 miles wide and 20 miles long. I was looking at a week-long, 70-mile route. I’d never lake-paddled a canoe before solo and I certainly underestimated the challenge.

In preparation for the journey, I assembled a comprehensive gear list. For me, are three main categories: food, shelter, and photography/video equipment. First order of business was to find a high-quality cooler that would be able to keep perishables for the week long journey. I settled on a 35-lb capacity Snowball into which would fit plenty of ice, 12 pounds of meat plus all my non-perishables as well. It’s also bear proof, another important factor to consider when your food source is not easily replaceable in remote regions. 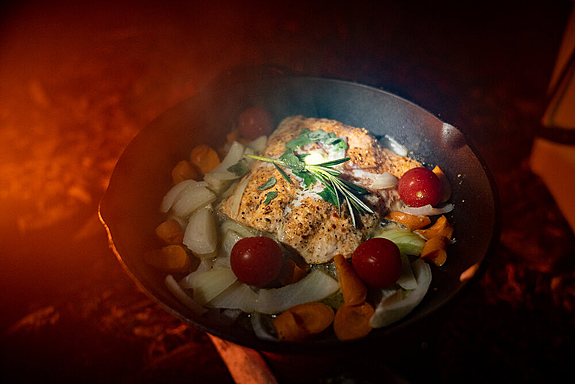 I looked forward to eating a great meal each evening. Image © Zac Durant

I planned to cook up one big meal at the end of each day in my 12” cast iron skillet with at least a pound of meat as the main course. A stick of butter, some crushed pepper, sea salt and chili pepper would flavor the assortment of meats which included rib-eye, filet mignon, chicken breast, lamb chops, salmon, tuna steak and a slab of bacon. This was my main calorie replenishment source, supplemented with a couple of smaller snacks during the day.

I used a portable butane stove for most of the skillet work, though I did cook a couple of nights on a bed of coals from the fire. For non-perishables I brought dense, high energy items like assorted nuts, beef jerky, dried fruits, dates, and a few energy bars.

For shelter and camping equipment I brought my ultralight tent, sleeping bag and an inflatable pad to go under it. Those are the big three for shelter at night. A warm jacket was also a key piece of gear for dealing with stormy conditions out on the water. For footwear I included some waterproof knee high boots, as I knew I’d have to pull the canoe through some shallow areas. 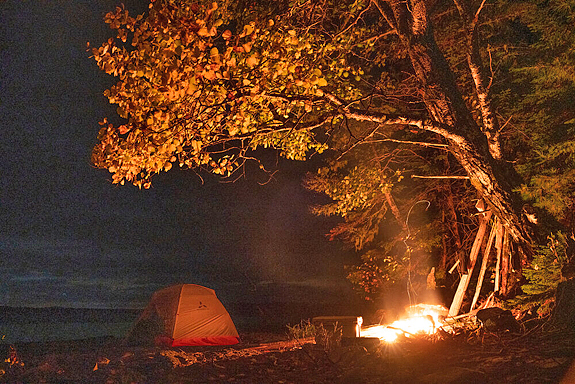 I camped by the water each night and slept well. Image © Zac Durant

I’m frequently asked if I bring anything to protect myself from wild animals and I have my own perspective on this. I think brandishing a weapon manifests fear, even attracts unfavorable circumstances from the associated mental energy. I do carry a little 4-inch folding knife that I keep clipped to my pants pocket—more of a tool than a weapon really, although it would suffice if needed.

Also asked is if I carry a cell phone in case of emergencies or just to communicate with family and friends. I do take one with me but I keep it turned off the entire time, don’t even touch it. It wouldn’t help much in an emergency because in the wilderness there’s no service available. And, anyway, I like the idea of having my survival in my own hands— more raw experience when there is no tap-out button. 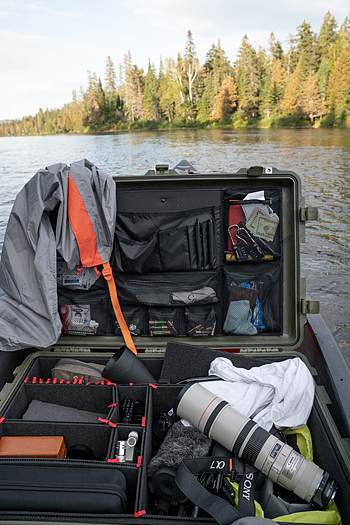 Some of my gear, all of which was protected by waterproof cases. Image © Zac Durant

My other camera (for video) is the Sony Cyber-shot DSC-RX100 VII with a compact 1-inch sensor that produces decent video and which I can fit it into my pocket for quick access. Dynamic range suffers a bit, but the accessibility offered in such a small form factor makes it a good option for grabbing quick clips on the move.

My main tripod is a Gitzo GIGT1545T Traveler Series 1 Carbon Fiber, great for long exposure stills and panoramas, and I also have a compact Sirius AM2-Series AM-225 tripod to use when filming myself with the RX100.

When I want to capture environmental sound, I use a Rode VideoMic NTG supercardioid shotgun microphone. For additional narration in a controlled environment, my Sennheiser MKE 600 shotgun mic with a Zoom H6 recorder does a fine job and can also record ambient sounds as well.

Finally, To protect all my gear, I use a couple of Pelican cases, one for photography equipment, the other for video/sound recording equipment. When I found myself pinned down in the middle of Lake Chesuncook with heavy winds and rain kicking up 4-foot swells, I felt a little better knowing that even if I didn’t survive, my camera equipment would come through the tragedy to tell the story. 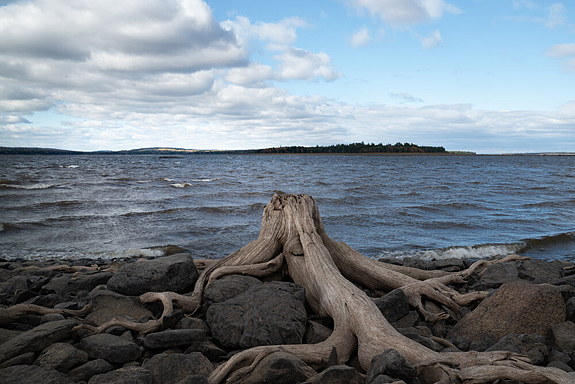 Lake Chesuncook, where I battled to stay alive. On a nearby lake, another canoeist was not so lucky that night. Image © Zac Durant

Editor’s Note: Don’t miss Part 2 where Zac describes highlights of his seven-day canoe journey, his fight to survive a vicious lake  storm, and tells how he selected and output striking prints on Red River Paper, featured at his exhibit that runs through September 7, 2021 at Summer Star Wildlife Sanctuary in Boylston, MA.

Zac Durant grew up close to nature on the banks of the Shawsheen River in North East Massachusetts and spent much of his early years canoeing the wilderness along the winding river.

After receiving dual degrees in philosophy and chemical engineering in 2012 from University of Massachusetts, Lowell, he established a career in the bio-tech industry. Four  years later, he discovered a new passion for photography.

Since then he’s used both photography and video to document his solo wilderness expeditions and uses Red River’s Palo Duro SoftGloss Rag  papers exclusively for his large-print exhibits.