The war was over and Kodak had new consumer cameras that shot color print film.  The question? How to promote them? Tugboat, 1958, Brooklyn Bridge, Lower Manhattan. Image by Ralph Amdursky.

Back in the 1950s I used to take the subway from Brooklyn (where I lived) into Manhattan (“The City”) to go to concerts, museums and other attractions and also made frequent trips for art and music lessons and nighttime fun. Parts of my  borough were still semi-rural; just a decade earlier, cows   grazed nearby my home. As I grew up all the excitement, except for the Brooklyn Dodgers, was across the river. 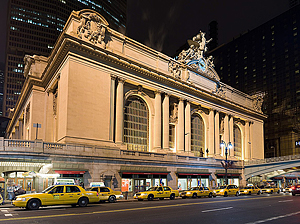 Grand Central Terminal hosted Kodak’s Coloramas for from 1950 to 1990. Image by Eric Baetscher.

It took only a nickel and about 45 minutes to get to Grand Central Station. Its magnificent terminal—almost cathedral-like—was (and still is) one of the largest and busiest train stations in the world. Local subway lines converged here; you could easily access them and other commuter lines that ran out to Long Island, or go big-time and buy a ticket for a trip on one of the New York Central Railroad’s Streamliners to almost anywhere in the country. 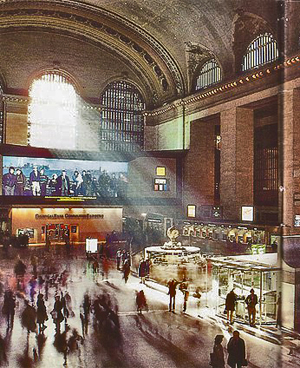 Over a period of 40 years, millions of travelers viewed Coloramas as they passed through the main concourse of the station. Image: NY Transit Museum.

More than 600,000 people passed through the terminal’s concourse on any given day and a plethora of shops, restaurants, exhibits and other attractions were housed there to amuse passengers while they waited for their trains to be called. World War II was over and the U.S. was booming. People had money and were traveling; new automobiles were once again plentiful and virtually flying out of car dealers’ showrooms.

Kodak had come up with a new line of small cameras and wanted to sell lots of them along with its newer, faster, color print film. Steve Kelly who worked as a Kodak in-house photographer for 38 years recalled that “ film resolution and grain were getting better, coating was become thinner, the image sharper.” Films were also making great strides in increased sensitivity to light and color fidelity.

These factors created a perfect storm for a campaign by Kodak’s advertising and marketing department and its powerhouse advertising agency, J. Walter Thompson. Together they conceived an audacious campaign fraught with technical difficulties and challenges equivalent to a moon shot. But Big Yellow had plenty of money, technical expertise and photo talent; they were a cocky bunch and confident they could pull it off. 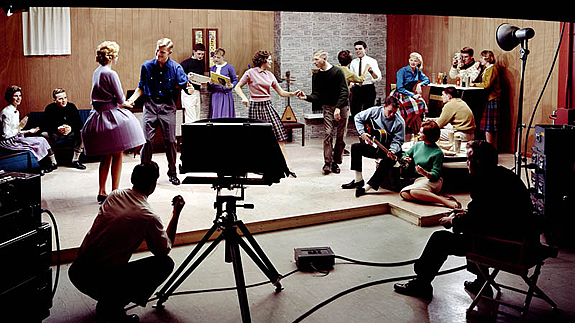 Neil Montanus and Lee Howick, Kodak staff photographers on a studio set shooting Teenage dance in a basement in 1961. Image courtesy of Kodak.

The plan was to shoot and display gigantic color transparencies every two to three weeks in the main concourse of Grand Central Station that depicted American values and inspirations, focusing on travel, leisure and family; essentially an idealized celebration of the good life in America. Each would be a panoramic view—18 feet high by 60 feet wide— shining like a beacon in the dimly lit, cavernous room.

When the first one was displayed in May, 1950. One newspaper account said, “it mesmerized and stunned.”  The impact on sales fully justified the cost of producing and displaying subsequent Coloramas for 40 more years…a total of 565 of them.

According to a Kodak news release, “at each new unveiling there were standing ovations from NY residents and out-of-town travelers alike.” In fact it prompted legendary photographer, Edward Steichen, who was Director of the Department of Photography at the Museum of Modern Art, and who was present at its debut, telegraphed Kodak: “Everyone in Grand Central agog and smiling. All just feeling good.”

But feeling especially good (make that “ecstatic”) were the creators at Kodak and their ad agency who watched as camera and color film sales begin to soar. Their main objective had had been to encourage Americans to document the highlights of their own lives;  Colorama subjects ranged from two kids pulling at a Thanksgiving turkey wishbone, to a teen-age dance party in a basement, a kid’s parade…and much more.

“Hey, look!” the Coloramas shouted, “You can now make pictures like these with Kodak’s new cameras and capture the great events in your lives—and get prints in color!” Which  eventually led to the “Kodak Moment” phrase now universally used. And to drive that point home, almost every panorama (at first) had one of the subjects in shooting the action in it with a camera. Later on images appeared that featured far-away places that viewers were  encouraged to visit and capture in color.

The technical aspects of producing the Colorama prints was daunting. Large, unwieldy 8” x 20” cameras were used to photograph scenes after which sections of the image were enlarged to 19-inch-wide by 18-foot high vertical strips. These were then trucked  from Rochester to Grand Central and glued together on site, piece by piece, a laborious and tricky job…until Kodak scientists developed a special transparent tape that made installation easier and faster. The frame they were displayed on in the terminal concourse required more than a mile of cold cathode tubular lighting, that generated 60,000 watts giving the images ultra, eye-popping luminosity.

As time went on, technological advances in photography allowed the use of smaller and smaller cameras; near the end of the Colorama era, even 35mm cameras were  used to produce the humongous prints with no apparent loss of visual quality when viewed from the floor of the enormous room.

One of Kodak’s top studio photographers was Neil Montanus (now deceased) who worked with colleague Lee Howick (also  gone) to produce a Colorama titled “Teen dance in a basement” which has been described in the book Photography Decoded as “a scene trying to recreate what adults thought teenagers did when they got together. Or more accurately, hoped they did.” It’s become an iconic image and luckily, someone shot a picture of Montanus and Howick setting up the shot,which was no small feat considering that 15 antsy teen models had to be meticulously positioned.

Montanus shot 55 Coloramas that were exhibited by Kodak. More than 100 others he was assigned to which didn’t make the cut have recently been discovered. One of them, of an attractive model in a bikini, lounging on a beach in Brazil, was considered too suggestive.

When Coloramas broadened their appeal to include foreign locations, Montanus had jumped at the opportunity to do some of them. One, in particular, was memorable because it might have ended his career.

“While on a Colorama assignment in Kenya, my driver spotted a cheetah. However, the view looking down from the Land Rover’s window was disappointing. With great care, I slipped out the opposite door, crawled around on the grass and peered through my 300mm telephoto lens. The animal’s alert face filled the viewfinder. Click, click, click . With the motor drive advancing, the cheetah growled menacingly. Another click, and I was back in the Land Rover almost before the drive stopped whirring—and before the cheetah loped over to investigate. Fortunately, he hadn’t leaped!”

Although the Coloramas were enthusiastically praised by most, others looked at them differently. James Estrin of the New York Times wrote in 2012: “Today, it is difficult to imagine many people having the lives that the advertisements depicted. This is not so much because America has changed since the ’60s, but rather because the country shown in the Coloramas never really existed.

“In the Coloramas of the 1960s, there was no space for poor people, feminists or civil rights activists. The Coloramas didn’t prominently feature African-American models until 1969. When they finally did, Kodak received complaints from some who passed through Grand Central.”

Yet, despite  detractors, there’s no denying  the Coloramas were enjoyed by many millions of viewers during their 40-year tenure. The images may not have  mirrored reality, but they spoke to the promise of the American Dream. And while Kodak may  have looked at them as just a tool a to sell cameras and color film, the Coloramas took on a life of their own—displaying an optimistic vision of the USA that Americans could see themselves achieving.

All images (unless otherwise credited) are © Eastment Kodak and have been supplied courtesy of the  George Eastman Museum, Rochester, New York.