Home » About Photographers » Movie Backdrop Art Will Blow Your Mind! 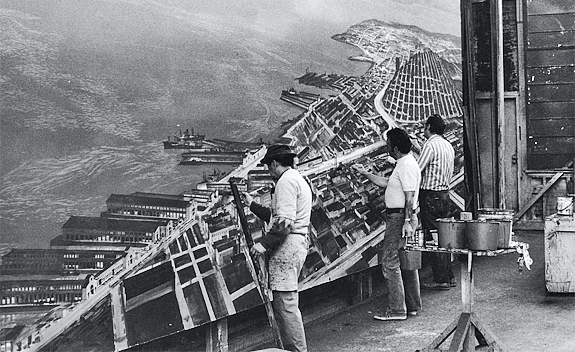 Hollywood backdrops were painted by talented artists who were masters of light and perspective. Photo: Courtesy of the Margaret Herrick Library.

They worked in shifts, round-the-clock, painting gigantic images to be draped behind the actors featured in the movies of their day. Each artist was given a section of the backdrop to paint as time was of the essence. When lighted and integrated with the action, you’d swear you were in whatever location they depicted. Which, of course, was the whole idea.

After the movie was “in the can,” the canvasses (called “backings” in the industry) were rolled up and tossed onto dusty racks where many slept for more than 80 years before being awakened and acclaimed as works of  art. 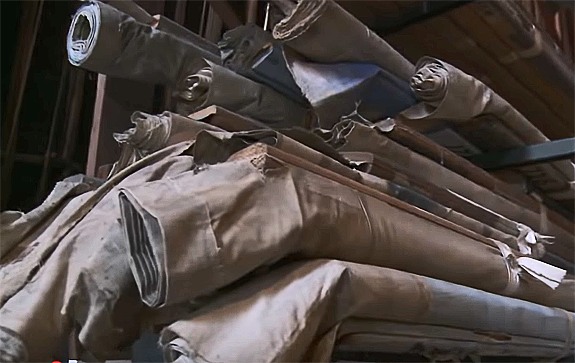 Some backdrops were stored as long as 80 years and were virtually forgotten until rescued. Photo: Boca Raton Museum of Art.

Hollywood’s backdrop artists were vital to the success of the industry, but these masters of illusion and perspective never received screen credits, perhaps because the studios wanted their audiences to think they were seeing real locations in the movies. But that’s only conjecture on my part. 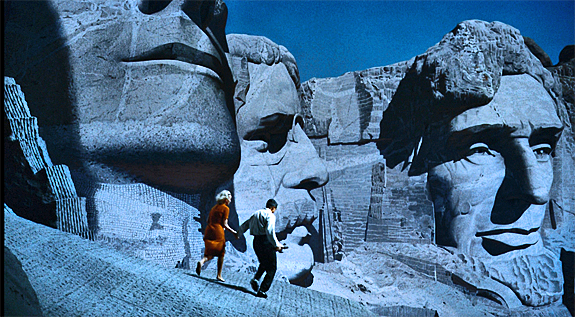 When the traditional movie studio system was liquidated in the early 1950s due to a 1948 Supreme Court anti-trust ruling against them, there were thousands of backdrops that escaped being sold off, mainly because they reposed in dark vaults that were overlooked when studio assets were put on the auction block, probably because  most had never been properly inventoried. Some were more than 100-feet long from classic films like Forbidden Planet, North By Northwest, Singin’ In the Rain, National Velvet and many more.

In 2018, research volunteers from the Art Directors Guild and the Cinematographers Guild discovered many of them of them that had been painted for classic films  and acquired more than 200 of them. Then came the tedious job of cataloguing them and connecting them to to the films they had backed.

Matching  more than 200 backdrops to their movies was a daunting task for the Backdrop Recovery Project (BRP). Sme  still have not been paired up. Photo: Courtesy BRP.

Many had done double duty in more than one film. One of them, a backdrop of Rome appeared in both Ben-Hur and Hail Caesar, which saved on costs. The studio probably  figured that Rome probably hadn’t changed very much  and, even if it had, who was around to say.

Tom Walsh, Production Designer and co-founder of the Art Director’s Guild heads the Backdrop Recovery Project. Walsh recently compared painted to photographic backgrounds which are used more in productions today. “ I still prefer to use a painted backdrop whenever possible,” he says, “because I think they light better and you can interpret the reality as opposed to just take a photograph and what the photograph is, is what you get.” Which is why there is still a healthy demand for painted backdrops. 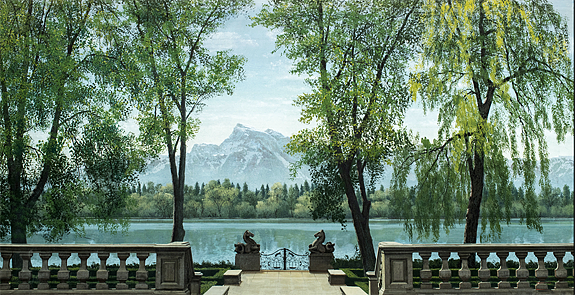 The iconic backdrop created for The Sound of Music will be seen for the first time at the Boca Raton Museum of Art. 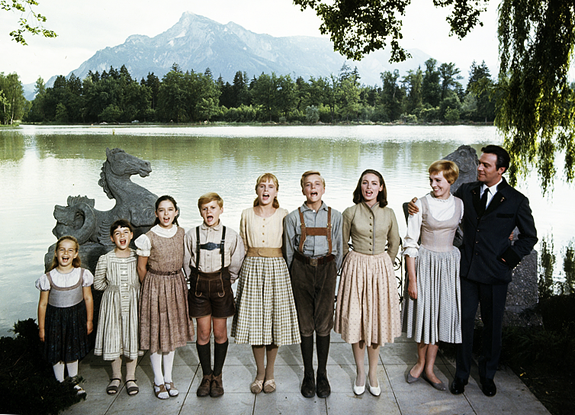 A film still from The Sound of Music, showing the actual location which was recreated with the iconic backdrop above. Image: 20th Century Fox (1965).

The J.C. Backings Corporation was established in 1962 to fill the need for quality custom painted backings and backdrop rentals. Today they continue to supply traditional backings as well as photo backings (Translites), and digital print vinyl backings. Lynne Coakley runs the company, and continuously searches for new technologies to create scenic backdrops. She also runs J.C.’s custom painted backdrop department. In 2017, after 46 years in business, the company moved from their quarters at Sony Studios scenic shop to a different location to support the expansion of its business. 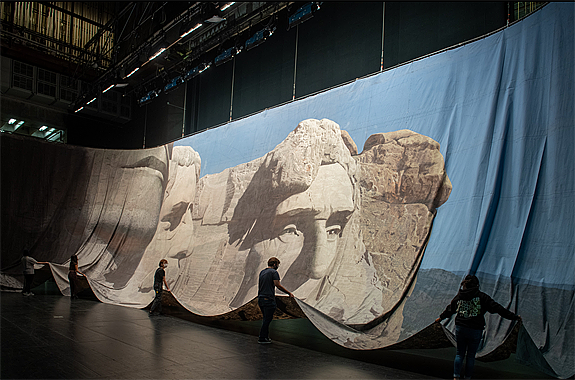 During the process of relocating over 2,000 painted scenic backdrops the company owned, J.C. donated more than 250 of them to the Academy of Motion Picture Arts & Sciences, to various educational institutions and to the Art Directors Guild Backdrop Recovery Project. Among them are Painted backings from historical films such as North By Northwest, The Shoes of A Fisherman, Forbidden Planet, Meet Me In Las Vegas and more.

Coakley points out that a 33 percent of her current business still comes from the rentals of painted backdrops. One of them, a city scene, used in the film The Fountinhead has been rented more than 30 times to TV shows, including The Jeffersons, Felicity, Roseanne, and The Practice. So it would seem those classic painted backdrops still have a lot of life left in them.

You can view 22 of these iconic backdrops, painted from 1938-1968, if you’re planning to be in Florida anytime from now until January 21, 2023. They are  exhibited at the Boca Raton Museum of Art, just 20-minutes north of Ft. Lauderdale’s airport, and about two-and-a-half hours south of Orlando’s. And once there, you can take some super selfies and group shots in front of most of them while enjoying interactive videos that show the backdrops in context with the movies they backed. 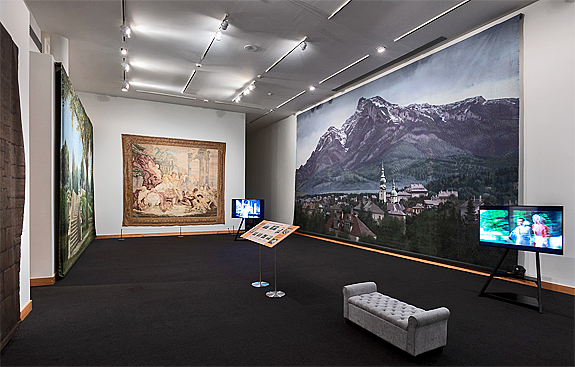 One of the backdrop exhibit spaces at the Boca Raton Museum of Art, in Boaca Raton, Florida.

Along with backdrops displayed from well-known movies, there are others which may not have appeared in major productions, but are nevertheless stunning examples of art in their own right. In fact, I’d suggest you consider Boca Raton as a vacation destination. It’s a spotless, classy city with gorgeous beaches, great fishing and more than a dozen fascinating museums catering to a wide range of interests, many of which offer free admission.

But certainly, if cinema, art and photography turn you on, you’ll have an experience of a lifetime meandering among these rarely-exhibited backdrops of Hollywood’s heyday. 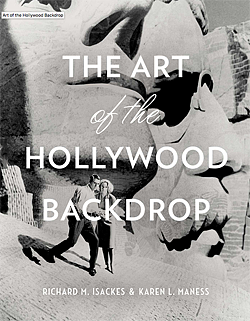 The Art of the Hollywood Backdrop.  This is the  behind-the-scenes history of  of Hollywood’s painted backdrops.

Richard Isackes and Karen Manness document both the backdrops and the scenic artists who brought them to the big screen.

It’s a bit pricey—$100 and only available from Simon & Schuster, but within its 352 pages there are more than 300 images.

Good news! It’s also available from S&S in a Kindle edition which can be purchased through Amazon for only $20.