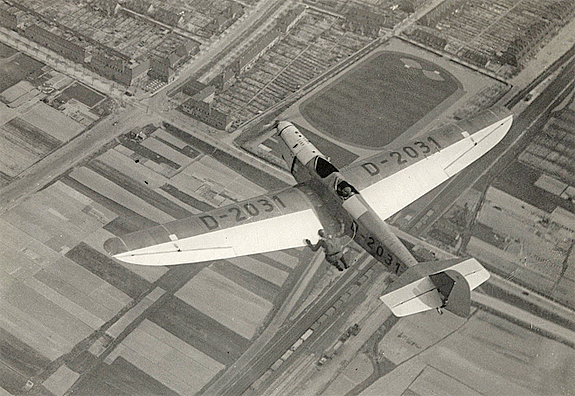 Photographer Willi Ruge jumps head first from a plane over Berlin in 1931, ready to photograph his descent.

On a chilly, spring day in 1931, Willi Ruge parachuted out of a, two-seater, single-engine aircraft flying in an overcast sky over Berlin. Seven minutes later he landed amidst some picnic tables and garden chairs with a shattered shinbone— which he stoically ignored. 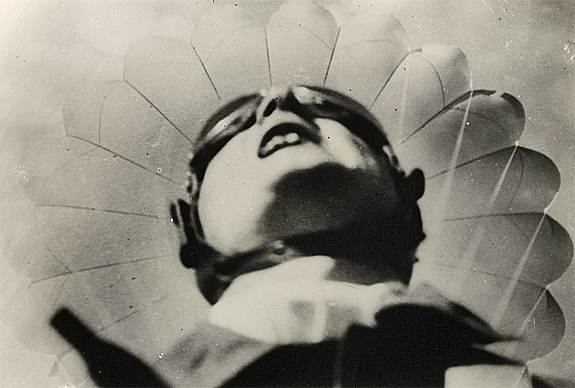 The decisive moment that every parachutist prays for—an open chute!

That was 91 years ago and what makes Willi’s jump memorable is that the 39-year-old German photographer carried with him a bulky camera and was probably the world’s first parachutist to document his own jump. In fact, he planned the shoot with such attention to detail, it is considered to be one of the earliest examples of the art of the photo essay.

Born in Hamburg in 1892, he’d been shooting pictures professionally for nearly 20 years before he made the jump and knew exactly the kinds of images that appealed to newspaper and magazine editors. This was no random, daredevil act and, in fact, it nearly never came to pass; the difficulty in getting necessary permissions for the jump threatened to strangled the project it before it could be executed.

The most onerous hurdle was that he had to take an extensive parachute training course and pass it.  He wrote about in one of the magazines where his pictures eventually appeared. “The director of the parachute factory was interested in our plan, but also somewhat skeptical. He only agreed when I assured him that, as an experienced pilot, I possessed sufficient aeronautical expertise.” 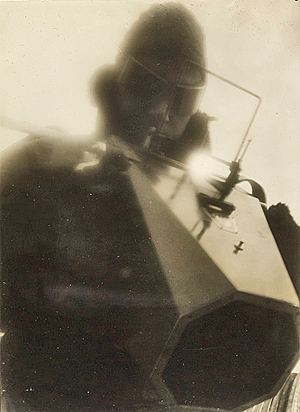 The camera was hefty and a and a bit awkward to use but it did the job.

After passing the course, he then began to choreograph the jump with one of his friends, Herr Böttcher. They  decided a third party was needed. “My colleague Herr Fernstädt pitched in to photograph my own jump from the vantage point of the second airplane.” Böttcher was to shoot the jump from the ground and capture reactions of Willi’s family and friends and both he and Willi would use small-gauge film cameras (bigger than 35mm) with automatic release triggers that they customized themselves. His friend in the second aircraft was equipped with a standard press camera. The three cameras would thus deliver full coverage of the event and add drama to the series. 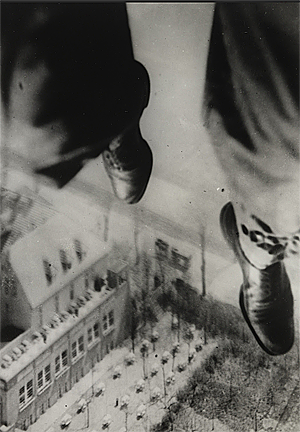 Ruge shot from as many different angles as he could during his seven minute descent.

Ute Eskildsen, who has documented Ruge’s life (see Resources below) says of the historic jump: “These photos, most likely taken based on Ruge’s advice and specification, convey a sense of space and height; the [magazine] article also includes three highly dramatic images captured by Ruge himself who wrote, ‘It is simply impossible for me to describe the feeling as I looked down to the earth below, head down. I hardly had the sensation of falling, of speed and danger. During the seemingly eternal time of seven minutes until I landed, I photographed what I saw.’”

“The object of Ruge’s observation,” Eskildsen says, “was his own body. Despite his paralyzed expression, the self-portrait taken from below, with the structure of the parachute in the background, conveys a feeling of relief — the parachute had opened. [One image] shows Ruge with his mouth wide open, his piercing cry almost audible.”

Willi’s eloquent caption of that moment shows he was as as good with words as he was with his eye: “It seemed to me as if some ruffian had suddenly grabbed me up by the collar of my coat and lifted me up: this was the decisive moment, because the pull showed that the parachute had unfolded and its braking begun.” 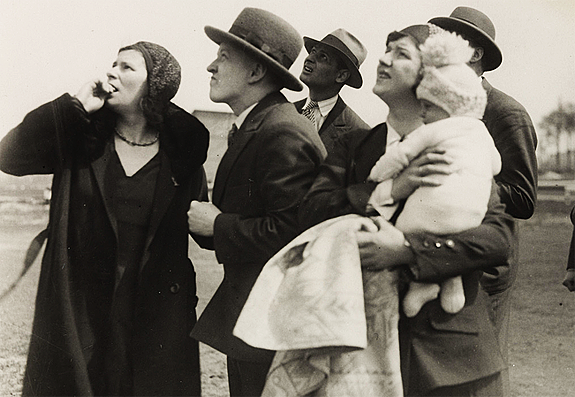 Willi’s family and friends on the ground as he descends. It appears that this  shot was likely posed.

Eskildsen goes on to say, “The experiment is more disturbing in two further images: Ruge falls toward the earth headfirst, tense hands outstretched; in the other his legs, isolated from his body, obstruct our view of the houses of the city below. ‘I am photographing my own feet at a height of two hundred meters,’ the caption reads. As he attempted to land, a power pole got in the way. He concluded, ‘A scratched face and shattered shinbone, but . . . a couple good shots. All in all: more luck than good sense.’” 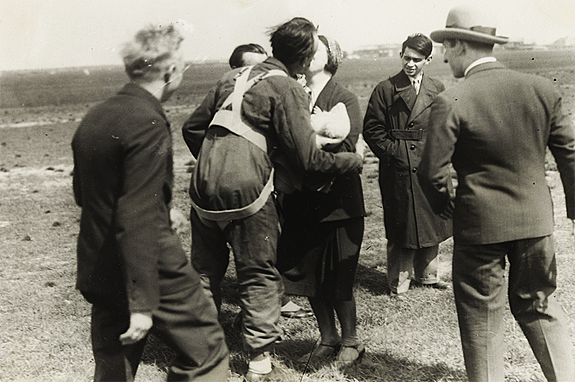 After landing, Willi embraces his wife and child.

It is thought that about 20 images were taken that day by the three photographers who shot the event; five original prints of those published have not been located. Most of the others are in the collection of the Museum of Modern Art (See Resources below) and can be viewed at large sizes on the web. 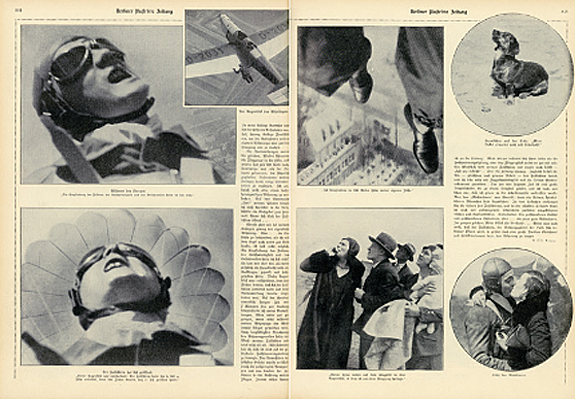 One of many magazines in Germany, England and the U.S. that published Willi Ruge’s remarkable work as a photo essay.

Willi Ruge went on to cover many other photo-reportage assignments before he died at in 1961 at 69. Unfortunately most of his work was destroyed in an allied air raid over Berlin in 1943. But his famous parachute jump series gained him worldwide attention and a place in history as one of the first photojournalists who had mastered the art of the photo essay.

All photographs from  The Thomas Walther Collection 1909–1949 at The Museum of Modern Art.

View  all Willi Ruge parachute images at The Museum of Modern Art here.

Read more about the life of Willi Ruge by Ute Eskildsen