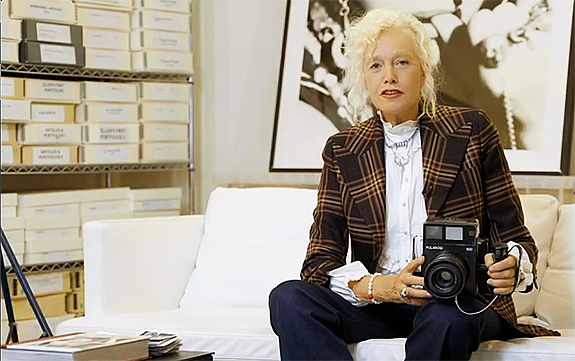 Ellen von Unwerth with one of the Polaroid cameras she used to do test shots before shooting with film.

Ellen von Unwerth’s early career as a fashion model led her to switch sides of the camera. She became a world famous fashion photographer capturing defining moments during the supermodel heyday of the 1990s and early 2000s.

Many of the works were created during editorial assignments for international publications, including Vogue US, and Vogue Italia and featured some of the biggest names in fashion, including Kate Moss, Claudia Schiffer, Naomi Campbell, Karen Mulder, and Nadja Auermann.

Twenty of her test Polaroid images were recently individually auctioned by Phillips in London. They were estimated to sell for a total of $40,000 to $60,000. They sold for  more than $232,000.

Yuka Yamaji, Head of Photographs for Phillips in Europe, and celebrated photographer Ellen von Unwerth discuss her enduring relationship with Polaroids and the stories behind some of her most memorable moments.

YUKA YAMAJI: Are all 20 works in our ULTIMATE selection of you work Polaroid Type 100 prints, shot on peel-apart film?

EvU: I used a Polaroid camera with Type 100 peel-apart film.

YY: Did you begin using the Polaroid as a tool to preview a picture before you took it?

EvU: Yes, I always used the Polaroid before shooting with my camera to check on lighting and subjects. 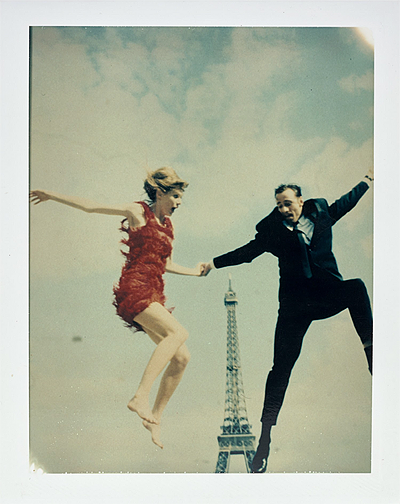 YY: The earliest Polaroid in the offering dates back to 1987.

EvU: Yes, Jump Over the Eiffel Tower was taken during one of my first ever fashion shoots.

YY: How did you capture this dynamic image?

EvU: I wanted to express the joy of being in the romantic city of Paris. So, I had the couple jump on a trampoline and tried to catch them at the right angle so they could be seen with the Eiffel Tower.

YY: For me, this work encapsulates the magic of Polaroids. It captures so much within the tiny frame – joy, energy, movement, spontaneity, and even the Eiffel Tower! What stood out for you about shooting Polaroids?

EvU: The Polaroids I used would give you a direct idea of what your photographs were going to look like. 30 years ago, until not that long ago, we didn’t have digital cameras where we could check the result instantly. Polaroids also stood out for me because they are little art objects, which are one of a kind. At first, I threw the Polaroids away as they were only there as a check-up for the pictures shot on film. I would also give lots of them away as people would always ask for them. That was until I came to appreciate the value of each one. 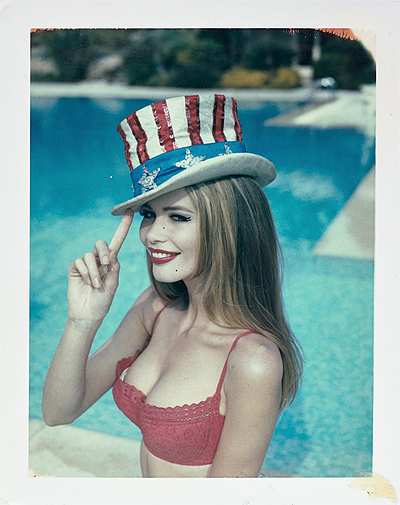 YY: This photograph of Claudia Schiffer calls attention to the wonderful reds and blues that are unique to Polaroids. What was this image taken for?

EvU: Miss America was for a 1994 calendar shoot in the South of France. We had Claudia play 12 different roles. I remember in one she is like a thief, climbing on the roof, and this one was based on Uncle Sam.

YY: Do you have Polaroids of the other 11 roles?

EvU: Unfortunately, this is one of the only ones that survived.

YY: Most of the Polaroids on offer were taken in the 1990s. What significance does this decade hold for you?

EvU: When I started researching my Polaroids for the Phillips auction, I really tried to focus on the iconic models of the 90s, mixed with more recent celebrities and series. It was at the time when I first started working and the decade still holds some of my favorite memories. 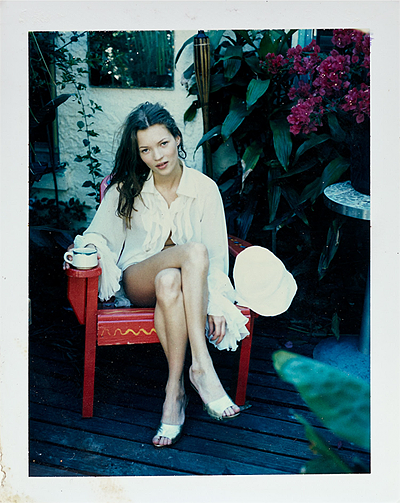 YY: This 1993 Polaroid of a young Kate Moss resembles a photograph of candid moment and not a test shot?

EvU: Yes, this is Kate in Miami, having coffee in the garden. She must have been about 16, right after the cover of The Face  with Corinne Day. We were there for a beauty shoot for American Vogue with the most amazing editor Grace Coddington.

YY: In contrast, this 1995 work [below] is clearly a test shot for a shoot and Kate is playing a particular role.

EvU: This was a shoot with Kate and the editor Camilla Nickerson for American Vogue. We imagined Kate as a young actress in Paris, dreaming of a big career. I loved the effect of having her there in real life and on the TV screen at the same time. I took lots of Polaroids to capture the best angle. 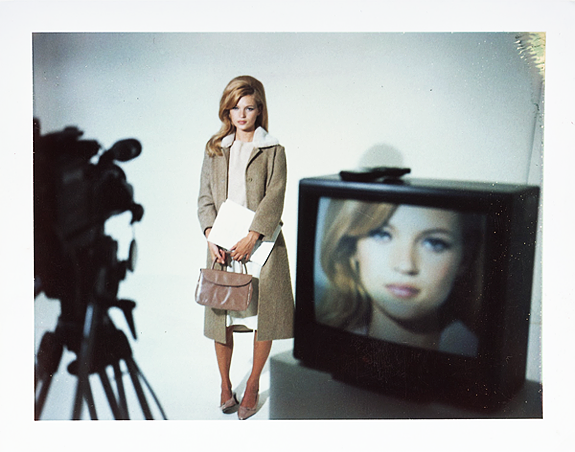 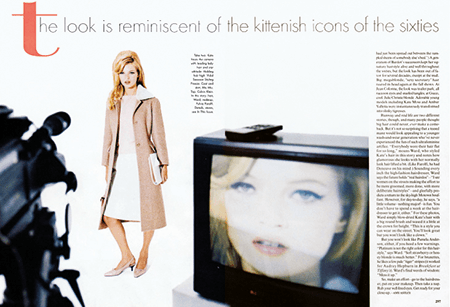 EvU: I still use the Polaroid on certain shoots. I used to use it all the time on analog shoots as it was our only way of previewing images. Nowadays, I use it because of the nice feel it gives. Unfortunately, the peel-apart Polaroids are almost impossible to find; I still have some in the fridge that I keep for special art projects.

YY: Polaroid continues to make integral films, including SX-70 and 8×10.

EvU: Yes, I sometimes use the modern version of Polaroids, the ones which pop out directly, making that lovely sound. I love their strange quality and their “hit-or-miss moments” as you cannot control their exposure in the same way as you could with the old ones. I love the spontaneity of Polaroids; everybody is always excited to see them appear and they add a nice energy to my set. Instant results and art objects that you can give to the talent or pin to the wall really create a specific atmosphere, which I love. 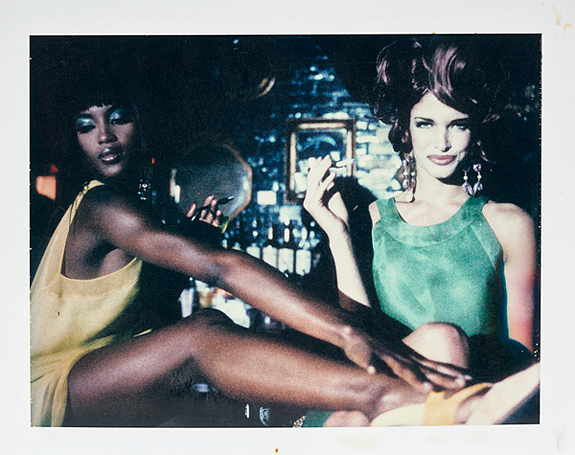 YY: What was the narrative behind this 1991 picture?

EvU: This was a shoot inspired by the movie Sweet Charity for Vogue Italia. I had all the hottest models of the moment on set: Naomi, Stephanie Seymour, Shana and Tatjana Patitz. I had my future husband play the Big Spender. However, I was not sure this was such a good idea as while we were shooting, I saw him looking at all the sexy girls as they tried to turn him on, just like in the movie.

YY: How would you describe this selection of 20 Polaroids?

EvU: I would say that the selection reflects some of my most known shoots, including supermodels, fashion stories for Vogue, and exuberant celebrities.

YY: What place does your Polaroids hold within the wider body of your work?

YY: Lastly, what does photography mean to you?

EvU: Photography is my voice. It is the way to share my vision of the world and society with an artistic eye. It is a tongue-in-cheek kind of way to enhance and glamorize reality, hopefully to inspire people now and for generations to come.

View all 20 of Ellen von Unwerth’s Polaroid images, with descriptive captions by her, that were auctioned at Phillips in London on November 22, 2022.

Thanks to Phillips, London for their kind contributions to this article.  Phillips  publishes a periodic newsletter announcing auctions of artwork and photographs at their various locations throughout the world Subscribe at the bottom of this page.

You can also watch their live auctions remotely by registering and then downloading their app at the App Store or Google Play.