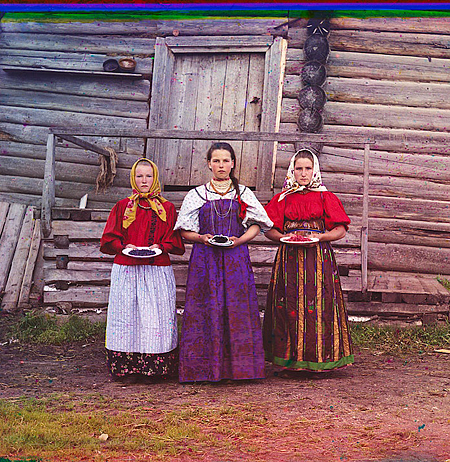 Young Russian peasant women in a rural area along the Sheksna River near the small town of Kirillov. ca. 1909

More than 100 years ago, Russian photographer Sergei Prokudin-Gorskii’s search for the Holy Grail of color photography ended in triumph. Unlike the alchemists of old whose quests to turn lead into gold had failed,  Prokudin-Gorki celebrated his eureka moment by seeking an audience with Tsar Nicholas II to propose his vision.

“Your Imperial Majesty,” he might have said, “I have discovered a way to make true color pictures from black and white photos and would respectfully suggest that you consider underwriting a land voyage during which time I will travel throughout your Empire capturing, in color, photographs of its diverse peoples, edifices and scenery.” He went on to explain that the images could be shown to schoolchildren throughout Russia to acquaint them with their vast and multi-ethnic country. 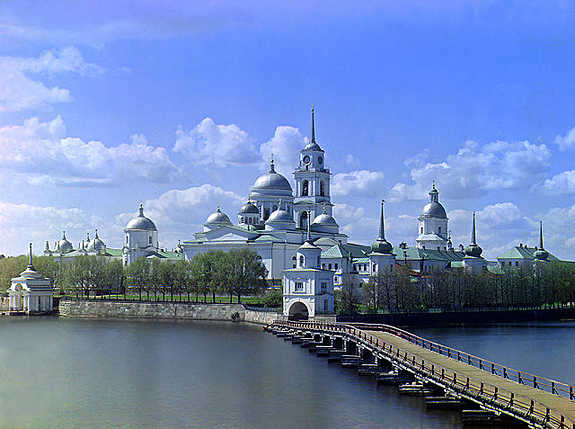 Monastery of St on . NilusStolbny Island in Lake Seliger near Ostashkov, 1910

Prokudin-Gorskii then gave a demonstration of his work, much to the astonishment of the Tsar and those in attendance. Nicholas was so impressed, he ordered a special railway car  outfitted with whatever this genius needed—including a darkroom. It would be uncoupled from the train at various locations so that Prokudin-Gorskii could spend time there and then, when he was finished, linked to  another train heading to the next destination. He also gave him valuable access to areas that normally would be off limits.

From 1909-1915 Prokudin-Gorskii began to shoot photographs (the goal was 10,000), returning periodically to St. Petersburg to show his work, not only to the Tsar but to the public as well– who , it is reported,responded with great enthusiasm, bringing down the house with lengthy applause and standing ovations. 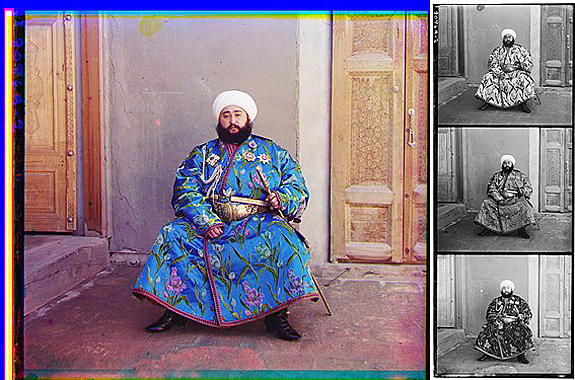 Color composite of Alim Khan, Emir of Bukhara, 1911. At right, the original triple negative on glass, shown here re-photographed to produce positive transparencies required for viewing. Prokudin-Gorsky photographed the upper, middle and lower images through blue, green and red filters and then projected them in  alignment through  the same filters to produce true color.

All was going splendidly until 1917 when Nicholas and his family were executed during the Russian Revolution. Prokudin-Gorskii and his family fled to Paris saving much of what he’d shot so far, stashing it in the basement of their living quarters. To make ends meet, he took his “True Color” show on the road and traveled through much Europe showing his work.

If you’re interested in how he worked his magic and conjured up color from black and white, Erica X. Eisen of The Public Domain Review (see Resources below) explains it in a recent article. “Drawing upon the work of James Clerk Maxwell, Adolf Miethe, and others, Prokudin-Gorsky [alternative last name spelling of Gorskii] honed a technique that mimicked how the human eye processes light by dividing it into three discrete channels.” 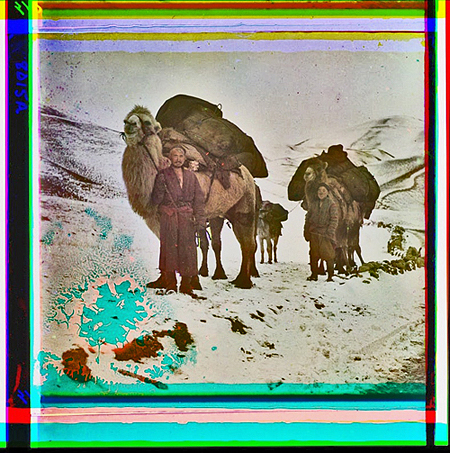 Brutal conditions never deterred Prokudin-Gorskii. Here,two camel drivers pose for a portrait. Exposure times ranged from 1-6 seconds (and sometimes more) so both the driver and their camels had had to hold still that long.

She goes on to say: “With the aid of special triple-wide glass plates, the photographer would capture each scene three times over— first through a blue filter, then a green one, and lastly a red one. The positive images, when projected using these same filters could then be recombined and overlayed to produce a gem-bright composite. In its elaborate three-shot, three-filter requirements, the technique differed from other early color photographic technologies, notably the Lumière Brothers’ potato-starch-based Autochrome, which the professor considered “complex and capricious” and discarded in favor of his own methods.”

As a longtime photographer, I realized that most accounts of Prokudin-Gorskii’s work simply refer to “negatives” or “positive images” which resulted from  f the initial images he shot. But you cannot get color results by lining up the three B&W negatives and projecting the original color through each.  Eisen mentions the projection technique correctly in that  positive transparencies must be projected.

Some media from which the original images were computer- composited at the Library of Congress were damaged. In this one, parts of the blue and green layers are missing, revealing only the red.

But how were those positive transparencies obtained? I asked Dr. Adam M. Silvia,Curator of Photography at the Library of Congress  (LOC) to elaborate on the process. Here’s what he said: “The original photos were negatives fixed on glass plates. Prokudin-Gorskii presented the images using a magic lantern projector, but this required him to photograph the negatives to create a positive slide.” Those, then,  were the images that were projected in alignment through the colored filters.

In an unusual move, the LOC acquired all of Prokudin-Gorskii’s images from his family for between $3000-$5000 after he died in 1944 when they found out that about 1,900 plates were still stored in his Paris basement. AFter they were moved to the U.S., they   languished at the LOC until digital technology had advanced sufficiently in the 1990s, to allow many of the images to be reconstructed using imaging programs. The results are outstanding and they are all free for the public to download and print. Some of them would make stunning greetings cards or just lovely framed wall pictures. (see Resources below) 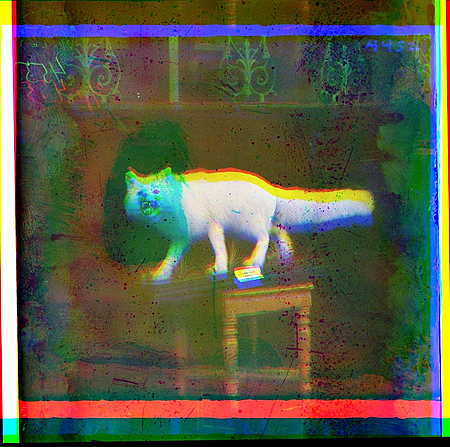 An early experiment that captured an image of a stuffed fox proved to Prokudin-Gorskii that his theory was sound and just needed to be refined. It also  involved improving the method of image capture and projection, and special hardware was subsequently developed to do so.

One of the famous subjects that Prokudin-Gorskii photographed was Count Leo Tolstoy. But it wasn’t an easy sell as the great writer at first was skeptical. So Prokudin-Gorskii turned up the heat. “These images are everlasting,” he wrote to Tolstoy, “they do not change. No painted reproduction can achieve such results.” Tolstoy acquiesced.

An account complete with technical details and a gallery of representative images: Wikipedia.

Library of Congress complete collection available for viewing and downloading at different resolutions.