Home » Books and Videos » The History of Photography in 5 Minutes

The History of Photography in 5 Minutes 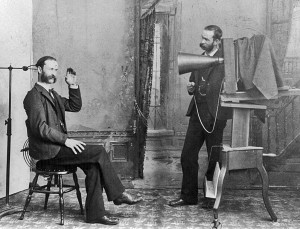 This appears to be an early spoof on photography in which the same person is both sitter and photographer in this manipulated image.

I came across a gem of a video the other day and thought I’d share it with you. But to digress a bit, its title brought back some great memories of Don Novello, a comedian whose character, Father Guido Sarducci, made millions of viewers laugh in the late 70s and early 80s when he appeared on Saturday Night Live and many late-night talk shows.

The good “Father” spoke with an Italian accent and purportedly was a reporter from a Vatican tabloid. He commented irreverently on many subjects, one of which was higher education; he talked about starting his own college called the Five Minute University– where $20 would cover “tuition, cap and gown rental, graduation picture, snacks, everything.”

Sarducci explained: “The idea is that in five minutes you learn what the average college graduate remembers five years after he or she is out of school.

“Say if you want to take Spanish, what I teach you is ‘¿Como está usted?’ that means, ‘how are you’, and the answer is ‘muy bien,’ means ‘very well.’ And believe me, if you took two years of college Spanish, five years after you are out of school ‘¿Como está usted?’ and ‘muy bien’ [is] about all you’re gonna remember.”

That said, you can see how the title of Matt Rycroft’s “The History of Photography in 5 Minutes” made me flash back to Father Sarducci and I thought: “This has to be a joke. How can you cover 190 years of photographic history from the time of Niepce’s first photo in 1826 to the present in five minutes?

As it turned out, though, it’s a lively, well-written and directed animated film short that hits all the high points. I even learned something I hadn’t known: that aside from posing stands used to keep subjects from moving during three-minute-and-longer exposures in Victorian studios, Rycroft says that photographers also offered drugs to their clients, presumably to calm their jitters.

Take the next five minutes to enjoy the video and, just in case you want to delve a little deeper, I’ve listed a few of the classics that have been written about photographic history. Fair warning: They’ll take more than five minutes to read. –AHB

Recommended books on the history of photography:

A World History of Photography (4th Edition) by Naomi Rosenblum

The History of Photography: From 1839 to the Present by Beaumont Newhall

“The History of Photography in 5 Minutes” © Matthew Rycroft at cooph.com. Used with permission.