Home » About Photographers » Three Photography Book Gems For Under $10 !

Three Photography Book Gems For Under $10 ! 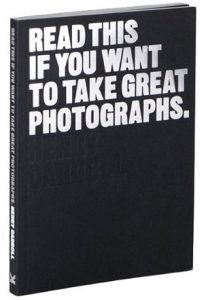 Now that we’re into the holiday season, I’d like to recommend three photography books that are stand-outs and would make great gifts or be worthy additions to your library. All are currently available at Amazon in used (but mostly like-new) condition at about $10 or less. Some are going for as little as a penny which makes them an excellent bargain. Here they are:

Read This If You Want To Take Great Photographs by Henry Carroll, (King Publishing). This slim 128-page tome is one of the best I’ve ever read (and I’ve read lots) for teaching both technical and esthetic photography to beginners and intermediates. You just know you’re in for a treat when the author’s first admonition is “Start by ignoring everything.”

Illustrated throughout by photos of the “greats” such as Henri Cartier-Bresson, Ansel Adams, Dorothea Lange and others, it is worth having just for its collection of beautifully reproduced images. And even if you regard yourself as a highly proficient photographer, I challenge you to tell me you didn’t learn something you didn’t know before. 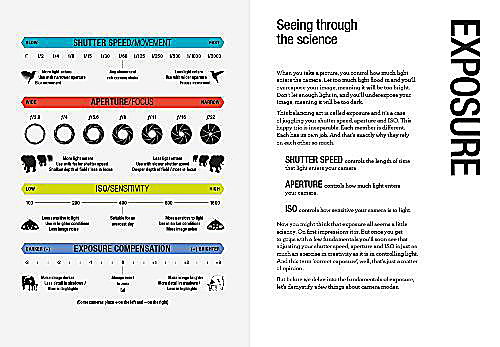 Carroll deftly covers Composition, Exposure, Light, Lenses and Seeing in a writing style that is refreshingly unique. Diagrams are beautifully designed to explain the mysteries of Aperture, Shutter Speed, ISO and Exposure Compensation in a way that quickly sparks aha moments.

If you were rocketing off to a space station and could only take your camera and one book about photography, this would be it.

Our World Tour by Mario Dirks, (Rocky Nook Publishing). When I first received this book I thought, “Oh no, another book of boring snapshots.” But as I began go through it I realized that this was no ordinary photo book; this was really good stuff.

Dirks is German and he won a much-coveted Sigma grant (beating out more than 1,000 other photographers) to do a year-long shoot throughout the world. He received $68,000 plus all expenses, tons of Sigma equipment, and an itinerary list with deadlines that would make the most seasoned pro tremble.

After 50 weeks, 77 cities, 48 countries and six continents it’s amazing that he still had enough energy left to put this book together, let alone keeping his marriage intact (his wife accompanied him). But he did it and so brilliantly that if you can’t learn something from this book (aside from enjoying the superb quality of his images) then you’d better give up photography– it’s not for you.

The images alone would have been awesome enough but Dirks goes much further. He decided to write an introduction explaining what it took to compete in the grant process, then pithy descriptions of each place he visited, capped off by explicit captions that accompany each image– including technical data for every shot in the 352-page book. Whew!

Especially breathtaking are his cityscapes taken at “the blue hour” (when the sky has not gone totally dark) which he explains in detail along with location data and exposure information. Those nighttime shots could be the subject of a standalone book but are just part of Dirk’s virtuosity as a photographer. His portraits of people are superb as is his approach to more mundane objects which he shoots in a visually exciting way.

Rocky Nook has done an extraordinary job on this book, well warranting its original price tag of $45. But now that you can get it for much less, it’s a real deal. 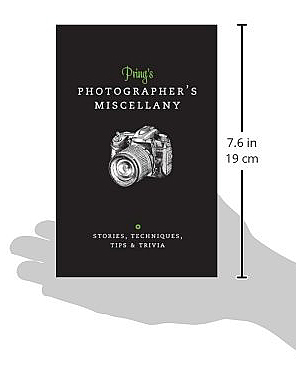 Pring’s Photographer’s Miscellany by Roger Pring, (Ilex Publishing). I’ve saved this one for last because it’s a weird, little 96-page, hard-covered book (with an attached ribbon bookmark) that I first thought I’d zing through in an hour or so. Three days later, I realized that, like very rich food, you can only devour so much at one sitting; thus the built-in bookmark became very handy.

Pring then goes on to do short illustrated pieces (more than 100 of them) that will enlighten you about a myriad of photographic topics such as, for example, the Pigeon Cam used in WWI for surveillance of the enemy (not too successful as soldiers shot them down and ate them– the pigeons, that is).

There’s a fascinating photo of 30,000 soldiers forming a patriotic mosaic shot from an 80-foot-high tower A quote from the great steam train photographer O. Winston Link about color film: “The locomotives are black. The coal is black. The night is black. So what am I going to do with color?”

See the first photo ever taken of an aircraft (in France) shot in 1868 (Wilber was a year old and Orville hadn’t been born yet), read short bios that sometimes reveal strange things about famous people in photography, learn how to say the equivalent of ”Cheese” in multiple languages (Klingon, not included, is “nIm wIb ngogh”)– in short, the book is a potpourri of photo esoterica, totally fascinating and illuminating.

You might not ordinarily buy this offbeat photo book for yourself but it would make a great gift for another photographer– after you read it, of course.

Where To Find The Books

At Amazon you’ll find all three books, some of which feature sample pages you can browse. Prices quoted were current as of December 12, 2016 but may be subject to change. Click on the titles below to get there.

Read This If You Want To Take Great Photographs