by Ron Wolfe and Will Keener– 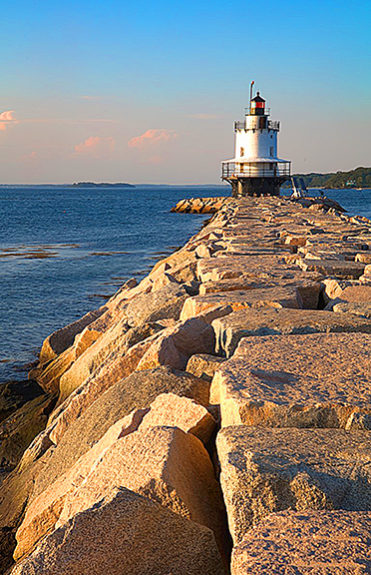 Maine earns its title as the “Lighthouse State,” with more than 60 historic lighthouses, many of which are still active, spread out along 5,000 miles of coastline, inlets and islands. As lighthouses became less essential to navigation in the late 20th Century, these historic structures faced demolition.

The National Historic Lighthouse Preservation Act of 2000 provided for the transfer of lighthouse structures to local governments and private non-profit groups to ensure their upkeep. The U.S. Coast Guard maintains the lamps and lenses and they remain a popular subject for photographers.

Some lighthouses are no longer accessible by land, so lighthouse boat tours can offer an ideal way to see these attractions and get the best photographs. To make the most of our short time in Maine, we studied a number of tours, some by boat and others by van. The information on routes and lighthouses proved valuable to us in planning our own rental-car based tour. 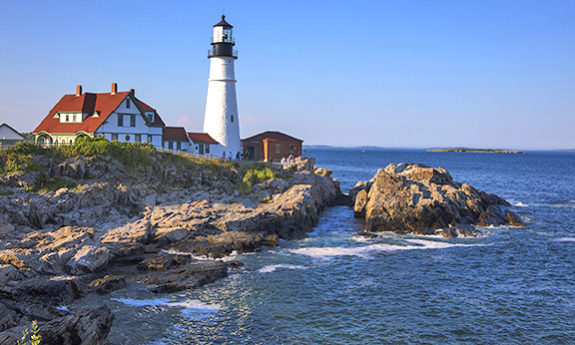 Coming north from Massachusetts, we ruled out the “Down East” of Maine (extreme northeast coast) as simply too far for us in the time available. A lighthouse boat tour from Bar Harbor covers six different coastal lights, but the time involved in getting there and back was excessive. So we decided to use Portland as our base, and booked a reasonably-priced motel there.

This allowed us to plot a route through the southern half of the state, maximizing the shooting in the two golden hour time periods available to us each day. There’s a saying in Maine about U.S. Highway 1, a key north-south coastal artery through the state. Traffic there is like winter– you never know where it comes from or how long it’s going to stay so allow some time to get from location to location. 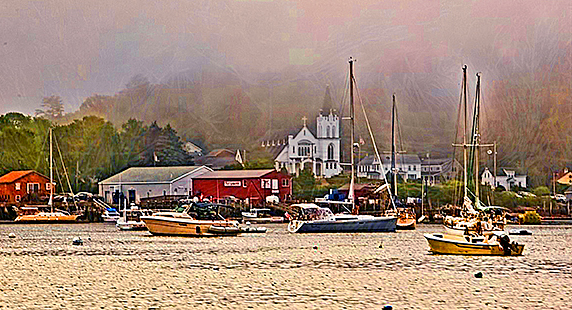 Boothbay Harbor was settled in 1666 as a fishing camp, originally known as Townsend, and later renamed Boothbay in 1842. The harbor is often enshrouded by fog, which can make for some moody images. © Ron Wolfe

En route to Portland, we squeezed into Sohier Park, 100 yards from the island that houses the Cape Neddick Light and spent the next hour or so looking for unique perspectives that might also keep many of the sunbathers and light watchers screened out of our photos. Despite the height of the sun, the dazzling colors of the afternoon provided some quality images and good memories of this historic light. Golden hour was approaching so we headed north to the next shot.

We found ourselves at the Portland Head Lighthouse, Maine’s oldest light and most iconic. The Portland Head is believed to be the most photographed lighthouse in the U.S. Some of the locations that might seem most desirable to photographers are fenced off in the park, but plenty of others remain. 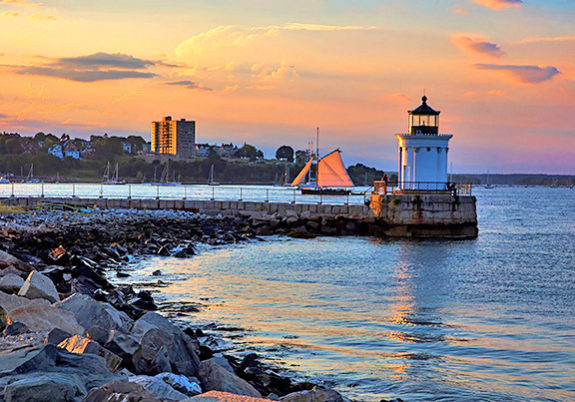 “Bug Light,” also known as the Portland Breakwater Light, is perhaps the shortest lighthouse you’ll ever see. Modeled after a Greek column, it was nicknamed for its diminutive size. © Ron Wolfe

Thanks to some good advice from a park ranger, we were actually able to catch two more lighthouses before sunset. We photographed the Spring Point Ledge Lighthouse and the Portland Breakwater Lighthouse– the two within sight of one another. Despite the fading daylight, both lights attracted plenty of visitors. This made our predilection for landscape images without humans more of a challenge, but we persevered in one case and used the visitors for scale in the other.

Day two. Batteries charged we were up and away early from our Portland motel. Our morning goal was Boothbay Harbor, a target-rich environment of lighthouses, scenic harbors, fishing villages, and other coastal trappings. And we saw it all– through the fog! But if you are in Maine and the photo gods give you fog, shoot fog! 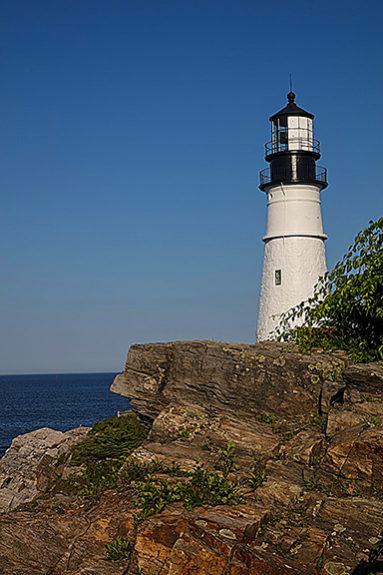 Another view of Portland Head Lighthouse– the first lighthouse completed by the United States government, and the most visited, painted, and photographed lighthouse in New England. © Ron Wolfe

Waiting for the Squirrel Island Ferry gave us an opportunity to photograph some early morning sailors and fisherman, maneuvering in the foggy bay. It also allowed us to zoom in on some details that could later be used a texture shots to enhance our work through blending during post-processing.

The ferry doubles as a tour boat that can go out of its way to show off some of the more interesting places around Boothbay Harbor. Burnt Island Light emerged from the fog off our starboard bow. Named for the practice of burning off all shrubs to improve grazing for livestock, the light is approaching its 200th birthday. It is open to tours by appointment.

We quickly become aware of the photographic danger that goes along with the mystical possibilities of shooting from a moving boat in foggy, or other low-light conditions. You’ll want to nudge up your ISO as well as your shutter speed in these situations, where depth of field becomes less an issue but motion blur can ruin your shots.  Returning on the ferry with Squirrel Island passengers, we were treated to a view of the harbor and village just beginning to wake up as the sun drove away the morning fog.

Reluctantly, we turned south toward Boston and the airport. In our planning, we had allowed time for serendipity on our trip back, or for the unexpected. A fishing village in a narrow harbor caught our attention at one stop. Based on our earlier research, we cherry-picked stops at other seaside villages along the coast as we headed to our journey’s end,

Now that we’ve processed our work, we can take time to appreciate the value of planning a successful photo expedition. Hope to see you out there soon!

Maine is seen by many visitors as a three-season destination, although more and more tourist services have become available in the winter. One Maine photographer explained that Maine winter is “rain, snow, sleet, ice, winds, snow turning to rain, rain turning to snow. . . We have it all, including no snow and extreme snow!” 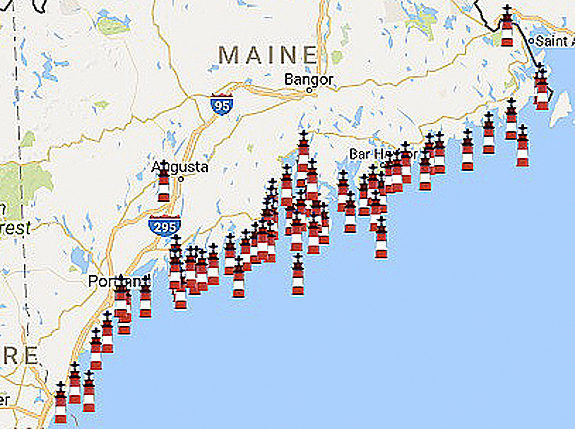 You could spend a year or more photographing Maine’s more-than-60 lighthouses.

We brought a small but sturdy tripod, which fit into a checked bag. Both of us chose walk-around lenses in the 24 to 105mm zoom range. Using a tripod, neutral density filters are a good bet for blurring water flows. Neither of us opted for a long telephoto for this trip. Protective wet weather gear for you and your cameras is also a good idea. GPS and backup maps can be important; coastline roads can be confusing.

Visit Maine:  This website lists lodging and has a spectrum of visitor information. This link connects you to the lighthouse directory, which divides the lights into districts along the Maine coast.

Lighthouse Friends:  Choose “maps,” then click on “Maine” and you are off to the races! Each lighthouse page has a detailed history, driving directions, visitor information on museums, nearby lodging, and a notes section for other information.

Book recommendation: A Short Bright Flash by Theresa Levitt. The story of Augustin Fresnel and the birth of the modern lighthouse that traces the development and implementation of his brilliant feat of engineering– a lens that made lighthouses blaze brighter, shine further and increase their efficiently. About $10.00 or less at Amazon.

Photographers’ Red River Paper recommendation:  66lb Palo Duro Satin was a good match for our summer lighthouse images with its warmer whites and a surface that reduced reflections and brought out detail.