Photographing a World Within a World 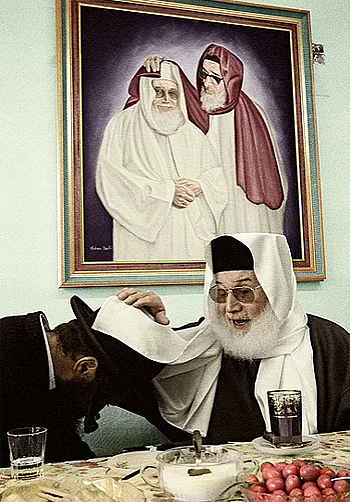 As a photojournalist, I became curious about the resurgence of the “Practical Kabbalah” amongst mainstream Israeli Jews and was intrigued as to why, at the end of the 20th century, educated people with full access to modern medicine, technology, the law and democracy were turning to religious scholars and ascetics for help as if none of the above existed.

I knew from my Jewish upbringing that the study and practice of Kabbalah was definitely not mainstream and very restricted; yet growing numbers of Israeli Jews from every type of background were in search of previously unknown Kabbalists for help in healing sickness, for business and legal advice and to receive blessings or amulets for general well-being.

Throughout hundreds of years of Jewish history there have only ever been a handful of Rabbis who were publicly identified as Kabbalists. So who were these ‘new’ Kabbalists and what were they offering? I needed someone to help me access these Rabbis and explain what I was doing so I could receive permission to photograph, which was strictly forbidden. Ultra religious Jews, such as the Hassidim, view such behaviour as an invasion of their privacy and it upsets them to think that they are viewed as particularly exotic or even bizarre. 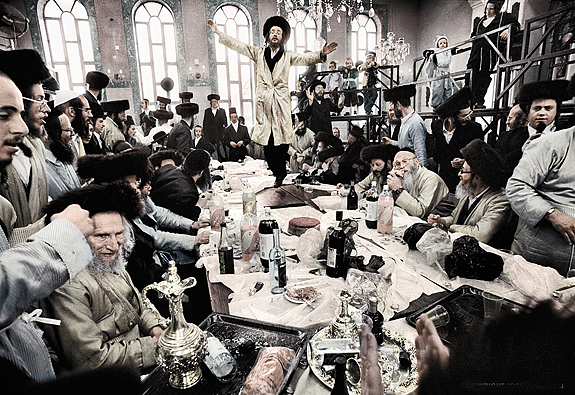 The person who agreed to help me came from a very prominent ultra religious Hassidic family from the community of Pinsk-Karlin. As work progressed on the Kabbalist reportage, my Hassidic ‘fixer’ would suggest that I come along to events at his community, which eventually would lead to my photographing the Hassidic way of life.

Despite being told by my Hassidic friend that I could enter and take some pictures, my habit of getting physically close to my subjects combined with their inherent suspicion of photographers was not received very well. Initially I experienced an enormous amount of hostility, spending a good two years of turning up to communal events uninvited and unwanted. Within a minute of entering any Hassidic event at least one person would take me aside and lead me to the exit telling me “Do Not Photograph.” 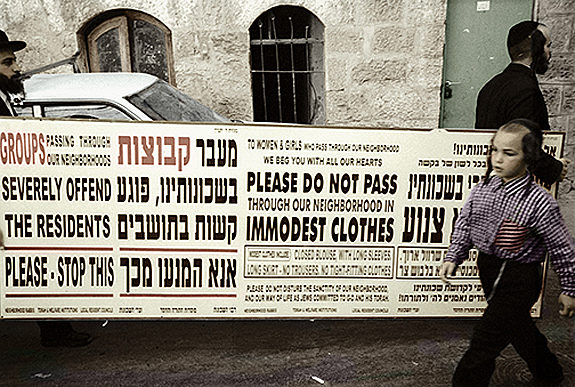 On one occasion when I made contact with one particular Hassidic community I was put in touch with a very charming American Hassid, whose English was perfect. We had a very open and frank discussion about what I was doing and he gave me the impression that taking photographs would not be a proble­m– as long as I was sensitive and discreet.

When we eventually met at his synagogue we continued our discussion to the point that I felt I could begin photographing. However, the moment I picked up my camera, he grabbed my arm and asked incredulously what I thought I was doing. I reminded him that we had an understanding and he explained that the understanding was with him only but I couldn’t just walk in and photograph what I wanted. 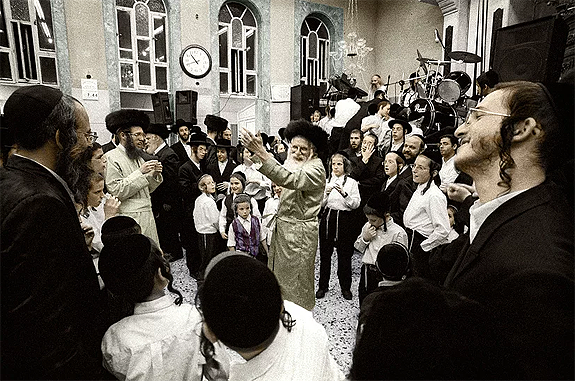 It was by virtue of my friend and his status within his own community that my presence was barely tolerated but even he couldn’t protect me from being splashed with tea, pushed around or being shouted at in public. Whilst I had expected resistance, I found myself getting irritated and sometimes miserable by the degree of unpleasantness with which Hassidim would interact with me. Clearly however, it was not unpleasant enough for me to stay away altogether!

Within about two years of my first encounter with the Pinsk Karlin Hassidim I received a call from the Rebbe’s (Rabbi’s) beadle (assistant), who happened to be my friend’s nephew. He suggested that I come to the Rebbe’s apartment in Bnei Berak to photograph him lighting Hannukah candles. You can imagine how conspicuous I felt photographing in a small room with about 30 Hassidim feeling very protective about their Rabbi. After taking a few pictures, I decided to leave but as I made my way out of the apartment, the beadle ran after me and asked if I minded giving the Rebbe a lift to a bar mitzvah, nearby. 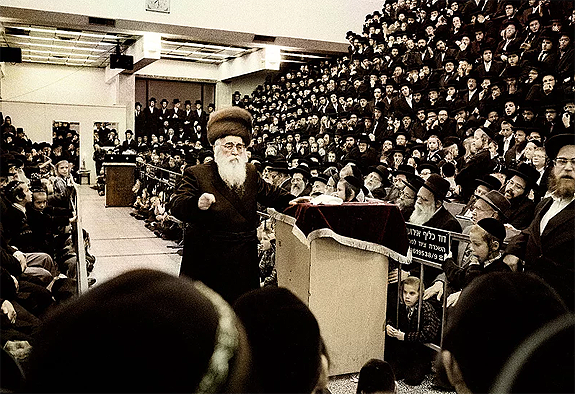 Naturally, I was happy to drive the Rebbe. What I didn’t expect was the number of Hassidim trying to get into my car as the Rebbe sat himself in the passenger seat. As we drove, the Rebbe began talking to me and asking me, very kindly, about what it was I was doing. Naturally I told him about what being a photojournalist means and that I was interested in photographing the Hassidic way of life in a way that was as honest and objective as possible. I also mentioned that a number of totally secular Jews, who had seen my photographs, had reacted in a very positive way and that it had encouraged them to be more proactive in their religious observance (which is absolutely true).

The Rebbe showed real interest in what I was doing and asked if I minded waiting for him to continue the conversation. Funnily enough, as I waited for the Rebbe, a young bloke waiting outside the function hall asked me how much I made driving the Rebbe and whether I thought he should invest in a car with which to drive Rabbis. Apparently this is a business in itself in the ultra-orthodox world. 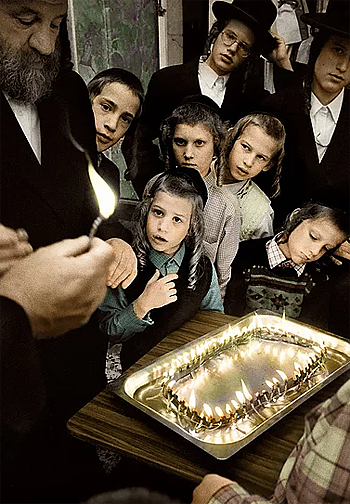 In any event the Rebbe returned with his entourage and we drove home during which we spoke some more. Our parting was very pleasant and he made a very positive impression me. Needless to say, being asked for a lift by the Rebbe, made a positive impression on his Hassidim.

Two days later, I received a phone call asking me if I was interested in coming to a Hannukah Tisch (celebration) at the Pinsk-Karlin synagogue. I arrived a little late whilst the Rebbe was giving a talk. Sure enough, I climbed the bleachers and squeezed myself in between two Hassidim who simultaneously told me not to photograph. Incredibly however, as I settled in amongst them, the Rebbe paused speaking, looked up at me and raised his hand in a greeting of “Shulem” (Shalom/welcome). Within seconds, the Hassidim either side of me told me that I could photograph and even asked if they could help hold some equipment.

From that evening on, I was left alone. This did not mean that every Hassid liked what I did or even approved of me being around with a camera but it meant that the Hassidim began to relax around me, which in turn created the necessary space in which to develop relationships and to photograph more intimately. I should mention that I believe that up until then, the Rebbe never instructed his Hassidim to behave towards me in one way or the other. 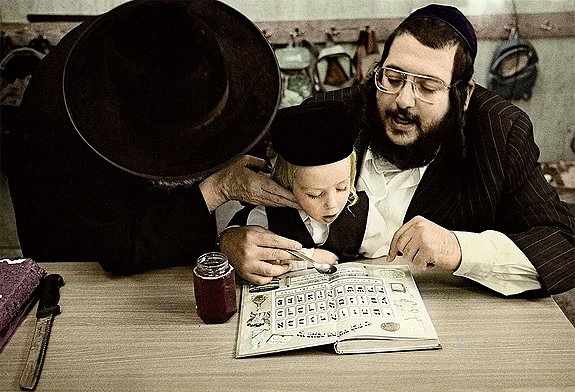 I would shoot with three camera bodies and fixed lenses. Two Leica M6s; one with a 35mm/f1.4 aspherical lens and the other with a 21mm/f2.8 lens. The third body was a Nikon F100 with an 85mm/f1.4 lens. All of these lenses demand that you think about what you are shooting and consider exactly where to be in whichever environment you are.

It took eight years of work, from 1996-2004 to complete my documentation of the Hassidic community but with the exception of  a small exhibition in New York, the initial reaction to this work was very, very neutral. It generated absolutely no interest at all from any publication, and so I filed the images away and forgot about them. 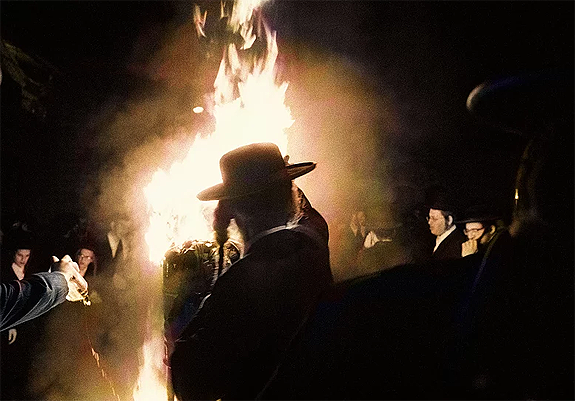 Years later, and no longer a photojournalist, I was on a business trip to Hong Kong where quite by chance I bumped into Danny Chau, who had been my printer in London. We chatted and re-connected and discussed these particular images, which Danny had always liked.

I had shot everything on B&W film (mainly with Tri-X Pan as it I found it to be very versatile and quite forgiving) so on my frequent trips to HK, I brought batches of negatives to his studio for scanning. Once I had edited through pages of negatives I was able to look at the work differently. 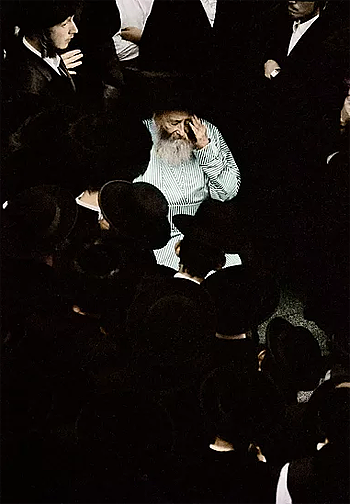 Looking at these images, people often remark at how they present a glimpse into a world that existed hundreds of years ago in Poland. So, in much the same way early photographers would hand paint their prints and postcards, I asked Danny to add subtle colours to the prints. Needless to say, I was very happy with the results and also pleased to turn my collection into a book, Do Not Photograph, that I hope will give readers insight into a different, but fascinating way of life that captured my imagination when I first became acquainted with it.

Joshua Haruni, 51, is a London-born photographer, currently living in Jerusalem. After earning a distinction in Professional Photography Practice at the London College of Printing in 1995, he began working as a freelance reportage photographer, doing assignments around the world. Visit his website to see more of his work and purchase fine arts prints. 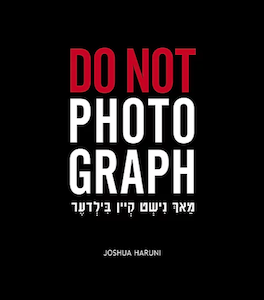 Do Not Photograph (2018) is a 303-page, fine arts, hardcover retrospective of Joshua’s photography from within the closed and hitherto rarely photographed Hassidic and Kabbalistic communities of Jerusalem. Each of the more-than 100 images is annotated in a special glossary section to provide both historical and contemporary prospective to an esoteric belief system and way of life that has endured without significant changes for hundreds of years.

As a special gift offer to Red River Paper blog readers, Joshua has reduced the regular $90 price to $55 which includes shipping to the U.S. and Canada. Delivery time is about two weeks from order placement. When ordering the book, use the code REDRIVER. Joshua will also autograph your copy upon request.