By Will Keener and Ron Wolfe— 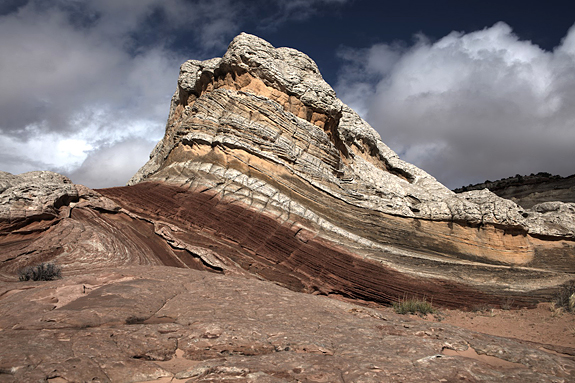 White Pocket is photographer’s dreamland; a remote, other-worldly experience in the Vermillion Cliffs National Monument in Arizona that looks like chef whipped up a colorful concoction from chunks of multi-colored fudge.

Writers tend to wax poetic in describing White Pocket, seeing visions of gum drops, ice cream cones, dragon’s eyes, and other objects in this altered version of what was once an ancient dune field. Yet, after visiting it, you aren’t likely to be too hard on their descriptions of the place.

White Pocket is only one of a generous number of locations around Page, Arizona, and Kanab, Utah, that aren’t as well known as the Wave, or the Antelope Slot Canyons, but are every bit as intriguing and beautiful to the photographic eye. What’s kept it from the wild popularity of its counterparts is its inaccessibility. To get there it takes more than two hours over bone-rattling, rutted, wash-boarded, sandy unmarked tracks on the Paria Plateau, deep within the national monument. 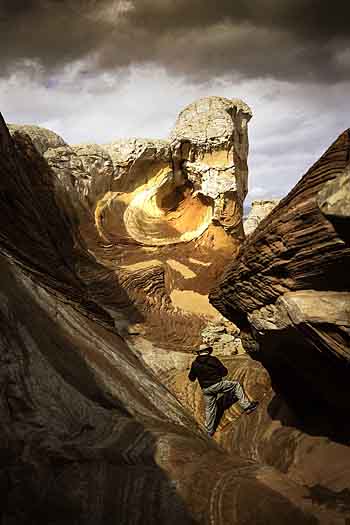 The geology of White Pocket is still being sorted out, but basically the area is part of a giant, millions-of-years- old Jurassic-age dune field that stretched along the western edge of North America when the continent was not yet north, let alone America. In an oxygen-rich atmosphere, minerals like limonite and hematite formed, creating the pallet of colors we see today.

Triggered by earthquakes, meteor collisions, extended rainfall events – or something else – the not-yet hardened dunes slumped and slid into depressions swirling and folding over themselves.

The ‘cauliflower’ or ‘brain’ rock that tops much of the White Pocket represents the original dune sand, deformed under pressure, and split into irregular polygons like puzzle pieces. There’s a lot left to sort out, geologists admit.

GETTING TO THE SITE

Or… you can do what we did, and take advantage of one of the many authorized tour companies and guides, who know what they’re doing. Tours offer all-terrain or more spacious vehicles. Some operators offer overnight tours, allowing photographers to take advantage of golden and blue hours, as well as night shooting, but most of these overnights have been temporarily suspended. 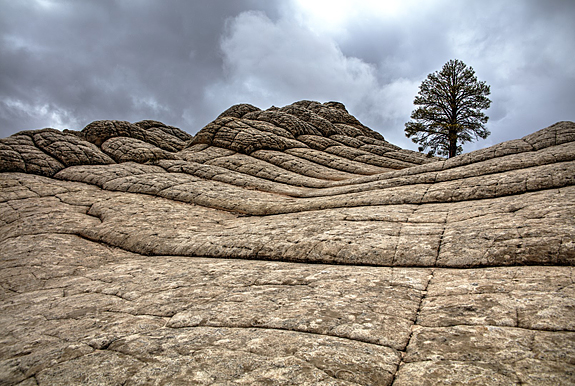 The White Pocket area can be seen and hiked in a few hours and we arrived late morning after stops at the Navajo Bridges over the Colorado River and another site from which we could view Condors in flight. Once there, our guide took us across the White Pocket site to give us an idea of some of its key features, then directed us to follow a circular path for the next few hours We had plenty of time for photos and a sandwich break and a departing storm left us an extra gift– shallow pools called tinajas, offering the potential for reflection photos.

Don’t forget sturdy hiking shoes, layers to adjust to the season, sunblock, a protective hat, and your camera gear. A tripod might be useful for evening photographs. Most of your images will be captured with a normal or wide-angle lens. Bring extra batteries and memory cards because it’s a long way to the camera store. You’ll want plenty of water, a lunch, and some snacks if you aren’t availing yourself of a tour that supplies those things. 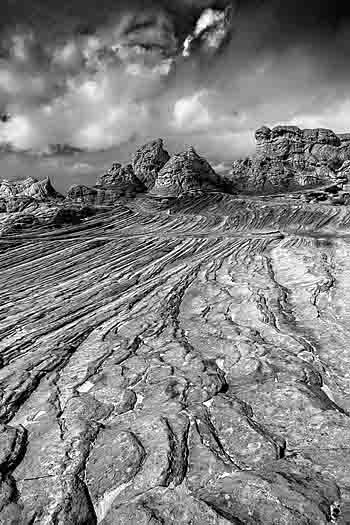 TOURS HAVE BEEN MODIFIED

Tours have  currently been modified due to the Covid virus, but the upside is that Grand Staircase Discovery Tours and others will offer you, your family and traveling companions a private tour experience so you won’t have to interact with strangers.

Regular tours run year-round but overnights have been put on hold until further notice because of difficulties with food preparation and other health considerations. Nevertheless,  the company and others that offer White Pocket tours will often work with photographers to shift tour times to allow photography at sunset, blue hour and into the night when possible.

The two gateway communities for White Pocket are Page, in Arizona, and Kanab, across the state line in Utah. 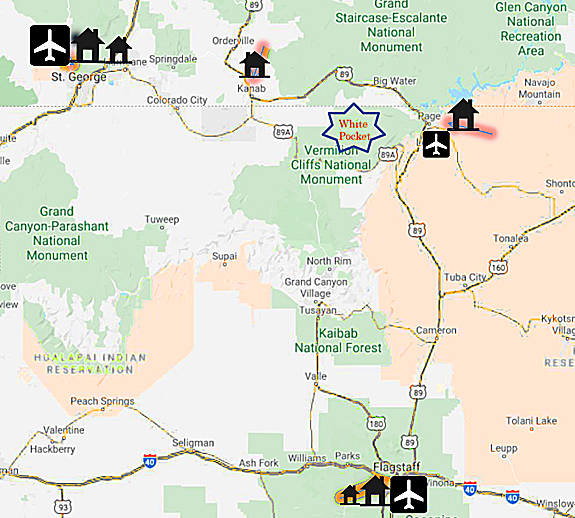 Page owes its existence to the Glen Canyon Dam and Lake Powell and was originally founded as a work camp during dam construction. Today, its population of more than 7,000 thrives due to federal jobs at the dam, the Navajo Power Generating station, and tourism. The place fairly bristles with motels, a wide variety of restaurant choices, and a full scope of tour operators and other services. Its airport offers connections to Denver and Phoenix as does Flagstaff’s airport, a two-hour drive south.

Lake Powell, 180 miles long, attracts an estimated three million annual visitors, many who opt to stay in Page. Other attractions for visitors include the upper and lower Antelope Canyon slot canyons, Horseshoe Bend and Lee’s Ferry, where all major Colorado River rafting trips begin. There are numerous other features in the Vermillion Cliffs and Grand Staircase-Escalante national monuments, and the north and south rims of the Grand Canyon are two to three hours away. 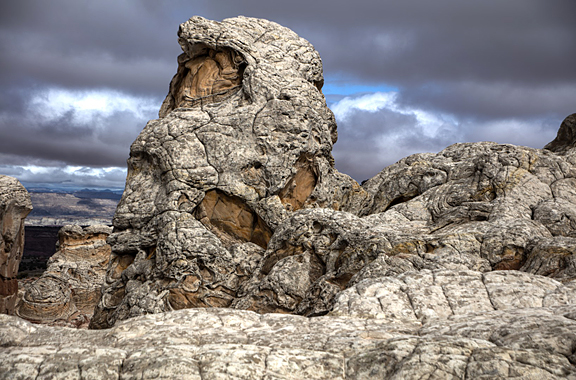 The city of Kanab, (pop. 4,500) is across the state line and in a different time zone during Daylight Savings. It’s a classic Western town, tucked up against red rock cliffs. So classic, in fact, that Zane Grey stayed there when he wrote “Riders of the Purple Sage,” and many movies have been filmed at locations nearby.

Kanab offers access to much of the Grand Staircase-Escalante and Vermillion Cliffs national monuments. It is an easy drive to the Utah gem, Zion National Park. Coral Pink Sand Dunes State Park and several slot canyons are other nearby attractions for those choosing Kanab as a base. Commercial airline flights are available at St. George, Utah, two and a half hours west of Kanab.

IT WON’T BE THIS WAY FOREVER

We found that a day in White Pocket, after a spring storm, offered photo opportunities galore. We were immersed in gorgeous, geological chaos, challenging us to do our best to create images that captured the exoticism of the place to impress our viewers. Go when you can. Someone’s going to see the value in ‘improving’ the road to White Pocket and then we can kiss this one-mile square of paradise good-bye.