The  composited image I submitted that would eventually  be used for the new Subaru auto dealership showroom. Image © Christiner Pentecoste.

Do you ever see something you want to take a photo of, “some day”? Something, maybe, you see all the time and plan to eventually get around to taking pictures of it? A unique lonely tree in an open field? Poppies waving in the breeze? A neat old building? A beautiful mountain range? And then, the unimaginable happens: the tree falls down, the field of poppies get crushed in a hail storm, that neat old building gets demolished. Or, that beautiful mountainside burns in a massive wildfire.

In case you’re wondering where I am going with this, let me explain. On April 2nd of this year, I received a phone call from the marketing director of a large, local Subaru dealership. They were looking for a photo of the Bridger Mountains. He found me through an Internet search, thanks to good key wording of images on my website. 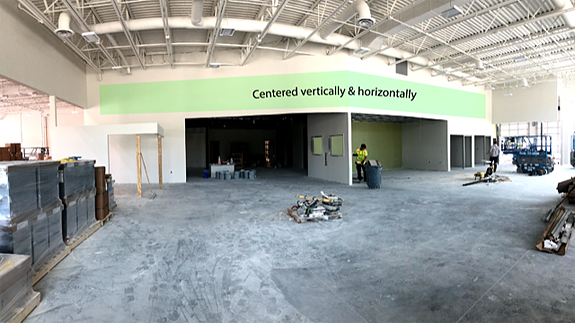 The auto dealership had torn down their old building and a new one was under construction. They were looking for a large panorama of the Bridger Mountains to hang in their showroom. Now this wasn’t just a large-sized photo; it was a huge photo panorama, 55 feet wide by 6 feet high, to be exact! He shared with me that the ideal photo would be one where they could blend two or more images, to create a “winter to summer” photo of the mountain range, and did I have anything like this? Well, yes, as a matter of fact, I did!

Now, back to the beginning of my story. I live in beautiful Bridger Canyon, north of Bozeman, Montana, where I look out my windows at the Bridger Mountain Range every day. I’ve hiked the Bridgers, skied the Bridgers and luckily, photographed the Bridgers. But then the unimaginable happened last September 5th.

A fire started in the foothills of the Bridger Mountains on the afternoon of September 4th that was right on the edge of town. A lightning strike had caused a hold-over fire. For those of you not familiar with the term, “hold-over” (aka Sleeper or Zombie) is a fire that can smolder for a considerable period of time until conditions are right for it to burst into flames and then quickly begins to spread. 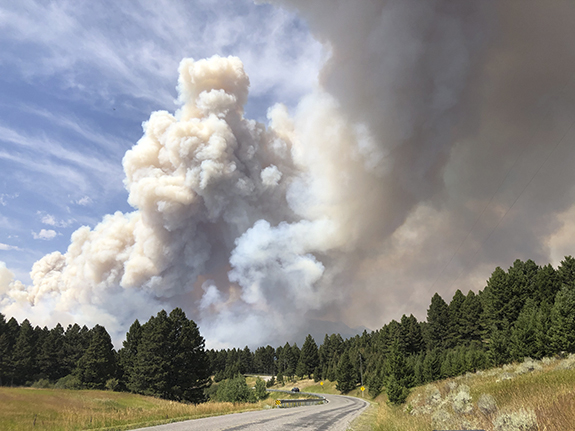 Smoke clouds fill the sky as the fire headed toward our home, causing us to evacuate. Image © Christine Pentecost.

Crews, along with jets and helicopters carrying fire retardant and water immediately attacked the blaze. We felt by Saturday morning, September 5th, that things were under control. And that might have happened except that Saturday was the hottest day of our summer– 95 degrees, with a wild storm front moving in, bringing with it wind gusts of more than 60 mph.

The fire immediately roared back to life in the afternoon and raced up the Canyon, ultimately burning 8,200 acres and destroying 68 structures, 30 of which were homes. My husband and I had to evacuate and it was, without a doubt, one of the most stressful days of my life. Thankfully, our home survived.

After surveying the extensive damage to the mountain, I began to realize how grateful I was to have as many photos as I do of the Bridger Mountains. But I regretted that most of the images I’d photographed were of the north half and not the south half, which burned the worst Still, I had enough of the south half in winter to make a winter-to-summer panorama work. 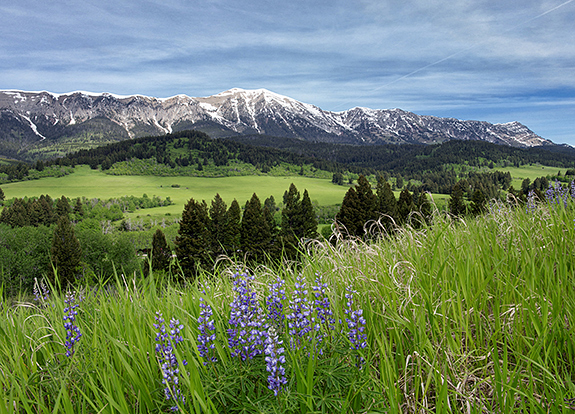 Two images (winter at top and summer at bottom) taken at different times were combined to produce the composite mural. Images © Christine Pentecost.

I initially picked out about 30 different images I’d shot of the Bridgers from varying viewpoints. And, because I work in Photoshop a lot, I was able to put a composite image together to give the Marketing Director of the dealership a better idea of what the final picture might look like. The two images I chose to combine were the “Bridgers in Winter,” a panorama, and the “Bridgers in June,” which was not.

While taken from very similar locations, they did not match up perfectly, so it definitely took some Photoshop mojo to get it right. Since I was one of several photographers being considered, I wanted to give my potential client the best presentation I could, and that extra effort paid off in the end– I was awarded the job! 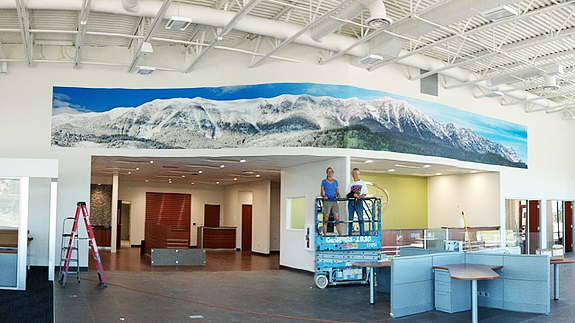 My husband, Levon and me standing atop one of the lifts in front of the 14-panel mural in the showroom. Image © Carol Fifer.

The company that created the final image, and printed it on an HP Latex 570 Large Format Printer (which took about two hours), is SCS Wraps in Bozeman. Wraps are printed on flexible vinyl  with adhesive backing which are then applied, usually, to vehicles. All those commercial and artistic designs you see on trucks and cars are rarely painted on anymore; instead they’re applied in sections by hand to conform to the shapes they’re applied to. It’s actually both a very high tech process to design the pieces and a very exacting process to fit them. 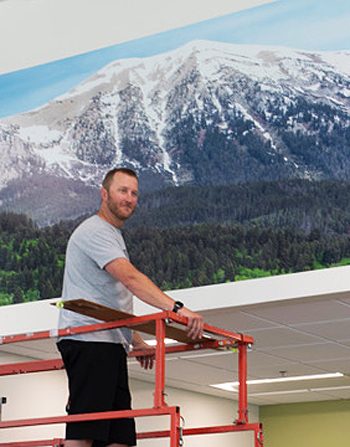 This gives you a sense of scale to show how large the mural actual is. The installers matched every panel perfectly. Image © Christine Pentecost.

My photo, however, would be a simple two-dimensional panorama; still, I wondered how they’d get the resolution they required from my images. I needn’t have worried. It turns out that super-large images need less resolution than if they were going to be printed at 300 ppi in a book– where they’d be viewed close-up.

I found that most billboards, for example, are printed at 18 ppi which makes them look great when you view them from the highway, but move in close and all you’ll see is a bunch of big dots.

So even though it sounded counter-intuitive to me, when SCS told me to submit my images at 150 ppi that’s what I did and, of course, they were right; the image looks super sharp and simply gorgeous spanning the high wall. Even close-up (where no one would ever view it) there was some softness, but no pixelation.

The tricky part about the installation was centering it properly on the wall, keeping it all level, and working around the bends in the center of the wall. I needn’t have worried about that, either. The installers were pros and had the 14 panels were lined up perfectly in about four hours. 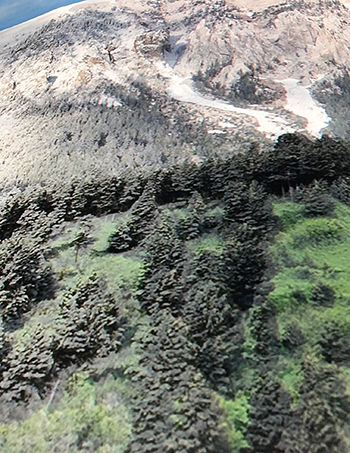 Even close-up, (from where it would never be viewed) you can see how well the 150ppi resolution holds together. Image © Christine Pentecost.

Next time I think about wanting to photograph something, I’m not going to drive by, thinking I’ll get it “next time,” because there just might not be a next time.

So instead of stopping to smell the roses, stop to take the photo! And, even though I can’t go back and photograph the south part of the Bridgers without showing extensive fire damage, I’m grateful that I have photos of the rest of the mountain prior to the fire.

That’s made me look at things a whole different way.

Christine Pentecost is a Red River Pro who lives in Bozeman, Montana and specializes in nature and wildlife photography. Her work can been viewed at her web site and you may also read her Red River Pro profile.

If large images intrigue you, read  how to make them in sections from small desktop printers using free online software which Christine wrote about in a past blog

And here’s a great article on large format printing.