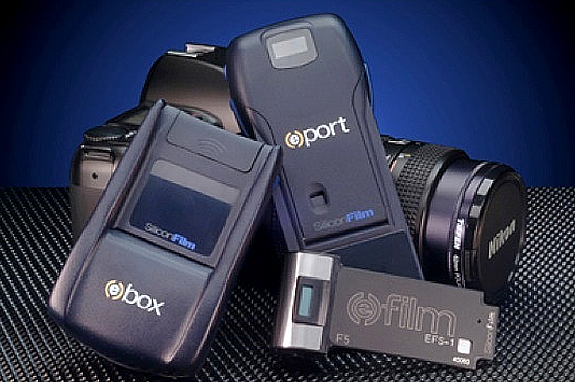 The Silicon Film Technologies system was bulky and unwieldy to use. The idea had some merit but the execution was a disaster. Image Courtesy Digitalkamera Museum.

I was going through some articles and columns that I’d written  at the beginning of the digital camera revolution more than 23 years ago and came across this one, which you may find interesting.

The company, not surprisingly, didn’t like it at all. They were on the verge of a public offering and planning to sell millions of dollars worth of stock (which I did not know at the time). Film photographers were so hot for this product (and knew so little about digital cameras), that they fell for this hook, line and sinker since it seemed so logical. I wrote it to set the record straight.

THE ARTICLE:  (Note: the original article did not include any graphics.)

Silicon Film Technologies’ EFS-1 (e)film™ module which promises to turn your 35mm SLR into a “high quality digital camera” reminds me of an old Dilbert cartoon in which a venture capitalist calls a business plan “idiotic” but funds it anyway because he’ll be able to “generate lots of media hype, go public, and make millions by shafting greedy and ignorant investors.”

I have absolutely no connection with the Silicon Film Technologies (www.siliconfilm.com), have not invested nor lost a penny in it, don’t know any of the people running it, and therefore have nothing to gain or lose from writing this column. But the (e)film idea is so badly executed, it’s worth telling you about, especially if you’ve been holding off buying a digicam in the hopes that a digital purse can be fabricated from an analog ear. 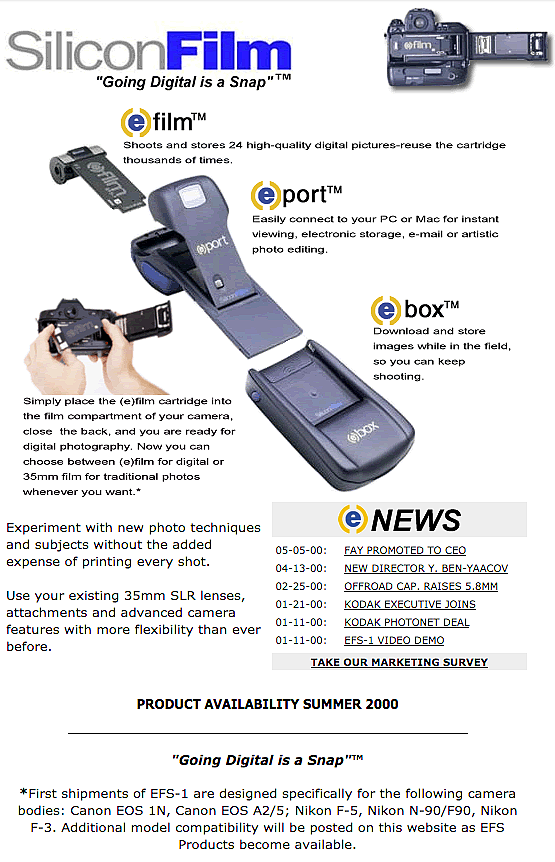 After delay after delay spanning almost three years the product failed to ship and was dubbed “Vaporware” by the photo industry.

The (e)film module is a 1.3MegaPixel insert that will sell for $699 and promises to “allow users to switch rapidly between conventional film and digital photography to suit field shooting requirements.” That’s what Silicon Film claims but what’s really amazing is that in this day of 2, 3 and 4 MegaPixel digicams they have recently generated $5.86 million in capital investment for a digital insert whose resolution is currently considered to be just barely acceptable.

To add insult to injury, Silicon Film’s system uses an inexpensive CMOS sensor array and CMOS is still fraught with artifact problems. In and of itself, CMOS technology has a great future, but its use in the EFS-1 (e)film module appears to be a gross mismatch for the five top-of-the-line, Canon and Nikon film cameras this system is supposed to work with.

Photographers with pricey 35mm cameras are going to have to settle for trailing edge technology– something I don’t think they’re going to like. Especially when the kid down the block shows them some big, beautiful prints that are twice as large as they can get– and from a 2Megapixel digicam costing half as much.

Then, there’s the limited capacity of the module itself; only 24 pictures before you have to stop shooting and download images to your computer or, if that’s not available, to a Compact Flash memory card in an (e)box™ that comes with the unit. Of course, at 2MB an image, that’ll mean buying lots of expensive high capacity CF or CFII flash cards. 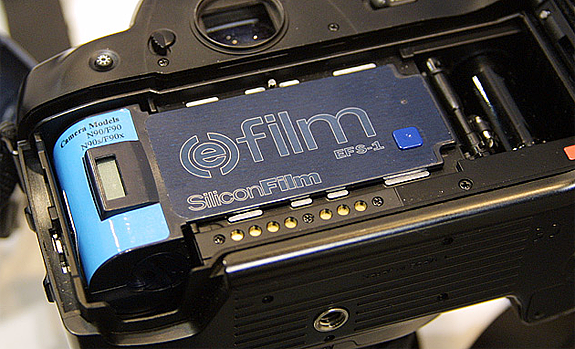 The module fitted into the back of the camera but there was no way to view images taken. Image Courtesy Digitalkamera Museum.

I suppose at this point you may be thinking I’m being tough on these guys at Silicon Film, but let’s use some common sense. If you own a digicam, you already know the two features consumers want most: instant image feedback and the ability to erase bad pictures.

Silicon Film’s system has no LCD monitor to let you see what you’ve shot and therefore, of course, no way to trash bad photos which would offset the module’s meager capacity. That’s really the one-two knockout punch!

Furthermore, what good is using a lens you’ve already invested in if it’ll give you an inferior image? What’s little known (and discussed less) in this field is that most film camera lenses are a bad match for digital capture because they don’t have the resolving power required to get maximum quality from small CCD sizes, such as the one Silicon Film is using in its (e)film module. The world’s major lens manufacturers –prestigious Schneider Optics among them– are now rushing newly designed lenses to market, optically formulated specifically for digital image capture because even their top-of-the-line film lenses just can’t cut it.

If you’re looking for a high ISO, forget it; 100 is the best you’re going to get, but even that wouldn’t be so bad if it weren’t for the absolutely ridiculous fields of view you’ll have to live with. Silicon Film tries to brush that away by posting a chart at the site which shows focal length multipliers of very pricey digital cameras that are integrated into conventional camera bodies. But there’s no dancing around this point: the (e)film module has the highest one of all- a whopping 2.85. (The new Nikon D-1, for example, has a tolerable 1.5.) 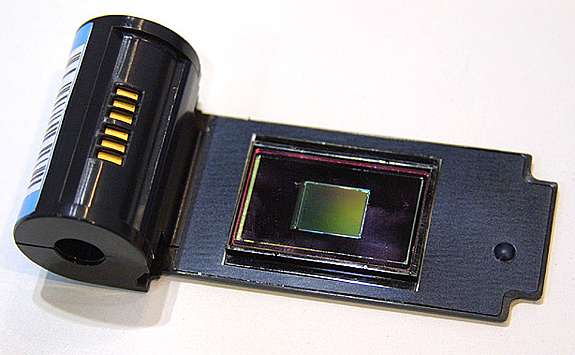 The lens crop area was extreme. A 50mm lens on a 35mm camera became a 142.5mm telephoto when used with the insert. Image Courtesy Digitalkamera Museum.

Which means, of course, that with the (e)film module, a “normal” 50mm lens on your 35mm camera becomes 142.5mm (50 x 2.85), barely hand-holdable. A 28mm lens equals 79.8mm and a 21mm is equivalent to 60mm. So if you like shooting wide for beautiful spatial effects, or just to get a few people into a group portrait, forget it; there’s just no way without spending an additional bundle on a super-wide lens, say, 14mm, which will still only provide the field of view of a 40mm lens– the low end of “normal.” This is hardly what film photographers expect (or will accept), especially since the image you view is an itty-bitty one centered on the SLR groundglass with a huge border around it.

To sum up, think twice before buying Silicon Film’s system just because you have a camera and some lenses lying around. A little Fuji MX-1200 for about $250 or an Olympus D-360L at around $270 will give you more enjoyment and better results than fumbling with the $699 (e)film module in your Canon or Nikon. However, if you simply must have one, don’t throw it away after the novelty wears off. Hang onto it because it will certainly be worth keeping around as a curious piece of low-tech digital memorabilia.

The company never got off the ground. Its chief investor backed out, the offering never occurred, and the company filed for bankruptcy and dropped off the map. My purpose in writing the article was to advise thousands of photographers, (mostly unsophisticated about  digital photography at the time), not to buy the product.

And I guess it shows  the pen can still wield some power for good.

Go here to find out more about details about the company and its demise.