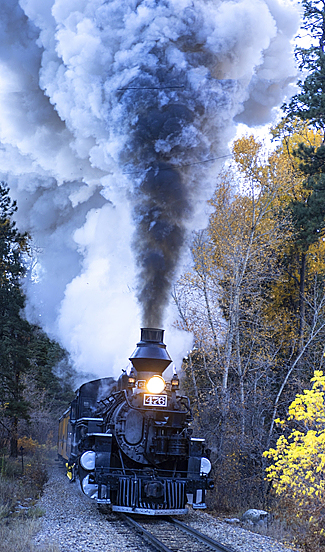 “Now listen to the jingle, the rumble, and the roar
As she glides along the woodland, through the hills, and by the shore…” —Wabash Cannonball

There’s magic in the old steam trains that first connected America– magic that’s woven into the country’s history. And there’s nothing more thrilling than spending a day, or a weekend, capturing that magic with your camera. Climbing aboard one of these preserved relics of bygone days can be like taking a step back in time– a history lesson on wheels.

One authority on steam trains in the U.S. (see Resources below) lists steam train operations for railfans in 30 states. Although many operate on a limited schedule, aimed at providing riding opportunities for warm weather visitors, some have seen the value of setting up special train packages for photographers during all seasons.

Whether you prefer the larger, standard-gauge trains or the narrow-gauge railroads, suited for tighter turns and difficult terrain, chances are you can find a photo opportunity in your region if not your state. An abundance of railfan web sites can help you get an idea of what a particular railroad is like, while offering you an opportunity to share your photos with others of like interest. 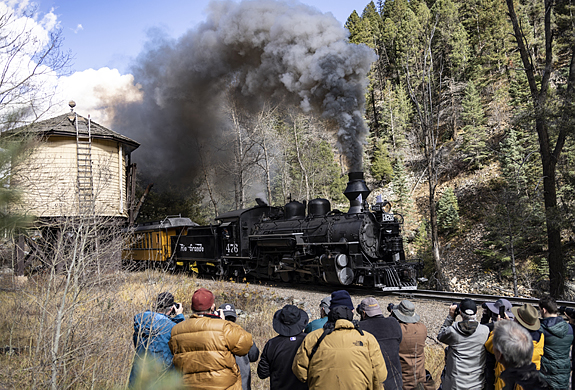 Among our favorite locales is the Durango and Silverton Narrow Gauge Railroad (D&SNG RR), based in Durango, Colorado. Established in the 1880s, the railroad is privately owned and caters to a broad spectrum of visitors. It also operates – with shorter runs – during winter months. Popular with Hollywood producers and a kind of mecca for many narrow-gauge shooters, the company offers two photography trips each year – one in autumn and a second in winter.

After recovering from a devastating wildfire several years ago, caused by a spark from a coal ember from one of the railroad’s engines, the company began switching from coal-fired to oil-fueled engines. There’s only one coal-fired engine left now, but still plenty of jingle, rumble and roar in the oil-fueled engines and lots of smoke out of the stacks. Plus, they are safer for the surrounding environment. 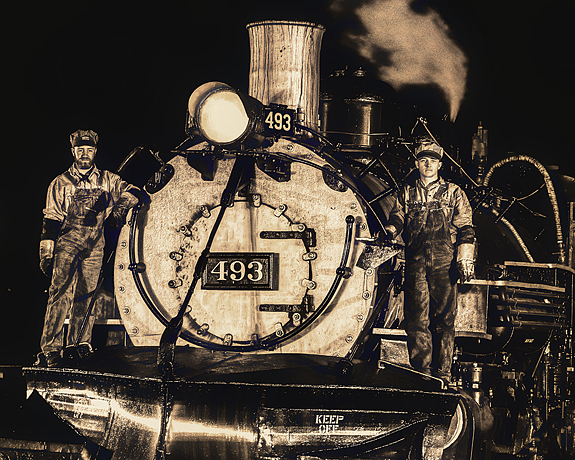 A good place to start for a steam railroad adventure is with a look at some gear and some thoughts about shooting safely. Each year a startling number of photographers and/or their subjects are killed by being struck by railroad trains. Please follow applicable laws and the instructions of crew members and other train employees. If you are on the train, be careful when crossing couplings between cars or leaning out of windows or other openings to shoot.

Take care in climbing on and off rail cars. When trains stop between station platforms, as they often do on photography runs, stepping on and off can especially difficult. Consider keeping your gear to a minimum or get help in handling your equipment in situations like this. 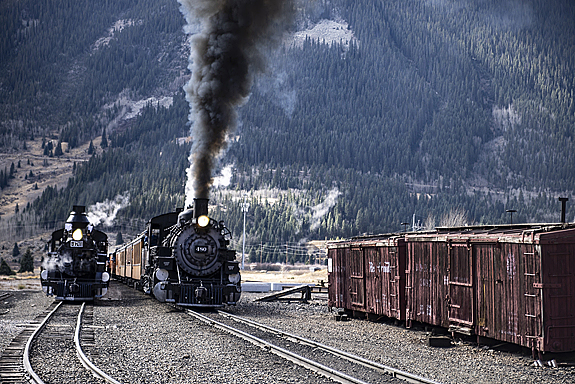 If you plan to ‘chase’ a train for exterior shots, it’s a good idea to scout your route in advance to find safe places to park, cross the tracks, and good viewpoints to shoot from. Some railroads offer photographers siding passes to get them closer to the trains. Otherwise please respect property boundaries and your fellow photographers, if you’re shooting in a group.

To the question of equipment, if you are riding the rails you might want to forego carrying a tripod. It will allow you more flexibility and help you keep out of the way of other passengers and crew. A smaller tripod or a monopod are other options to consider. For night shots or landscape views of the trains, tripods will continue to be a must. 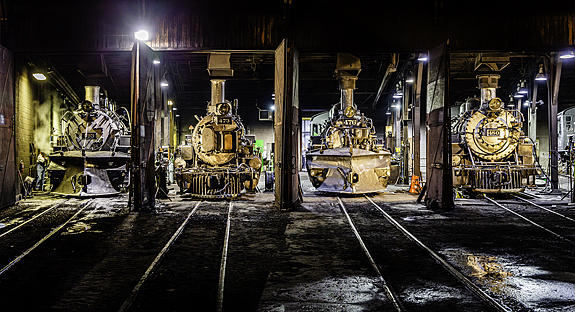 We often use the kind of walk-around lenses, such as a 24-105mm zoom, that allow for framing and composing in a variety of circumstances. Remember there is more to this activity than just shooting the moving train. You’ll want flexibility for crew portraits and train car and engine closeups as well for the more traditional rail shots. If you have room in your kit, a longer lens can also come in handy on occasion. 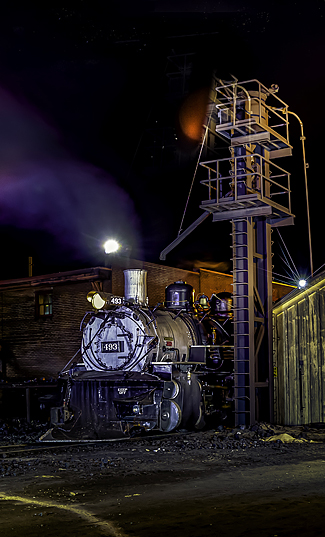 Steam engines are things of wonder, but they are also dark and gritty. If you use automatic or program settings, shutter or aperture priority, you risk capturing a properly exposed dark object on an overexposed landscape, or vice versa. Manual control can be your friend, especially if you can take time to make some test shots in advance. If you are more comfortable with the automated settings, be sure to use a fast shutter speed and use your exposure compensation settings to allow for catching the detail in the engines. Manual mode for both night shooting and moving trains during daylight is our preference.

A good starting point for daylight shutter speed is 1/500 second with an ISO of 200 to 400. At times, in low light, we used wider f/stops to preserve our high shutter speed and freeze train motion. If your aim is to blur some of the engine movement for effect, experiment with 1/30- or 1/60-second shutter speeds. If you plan to print some of your images at large sizes, be sure to keep the ISO as low as possible.

Consider using the “Servo Auto Focus” mode on your camera, with a single point of focus. Place your focus point midway on the engine and use an f-stop of f/8 or smaller to get the depth of field you’ll need to keep the train in focus. Each camera maker has its own version of this mode, which allows the camera and lens to track the focus point as the engine moves. This also allows you to use a continuous shooting mode, to capture several pictures of the train as it approaches. 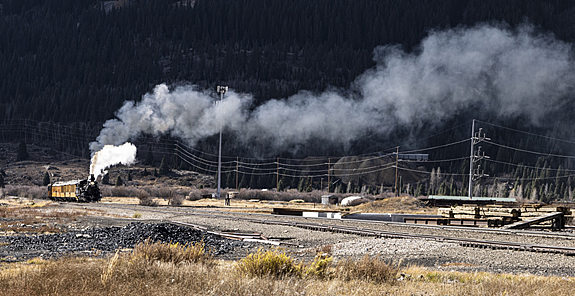 We found back-button focus works well in these situations. For those of you not familiar with the term, back button focus transfers the focusing function from the shutter release button and moves it to a dedicated button. The button is usually called AF-ON and is situated on the back of the camera, where you can easily reach it with your thumb allowing you to control exactly where you want the camera to focus.

For our nighttime visit to the trainyard, D&SNG RR employees set up a lighting array that enabled us to start with smaller apertures, f/8 to f/11, and keep our ISO at 100. By using a tripod, we were able to vary the shutter speeds according to our photo objective. We used slower speeds to capture billowing smoke or steam and faster ones to stop action while workers tended to engine maintenance chores. 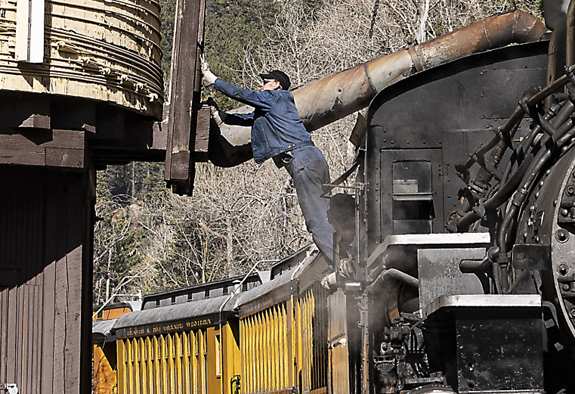 When it comes to composition, shooting down on a train – from a bridge or the like – can work in some cases, but usually headlight level or below yields a better look.  Getting down even lower for a shot can be effective depending on the foreground. As with automobiles, the three-quarter look – shooting from the front and off to the side of an approaching train – is the classic view.

And please, don’t forget the steam! Getting lower can help you to capture the top of the steam as it vents into the sky. Remember it’s a steam engine and that plume into the sky is what a lot of people want to see. In summer, the warm temperatures may diminish this effect, particularly with the switch from coal-fired boilers to oil. Cooler weather or winter shooting will give you much more impressive, atmospheric plumes, as do track locations where the engine is working harder to get up a grade. 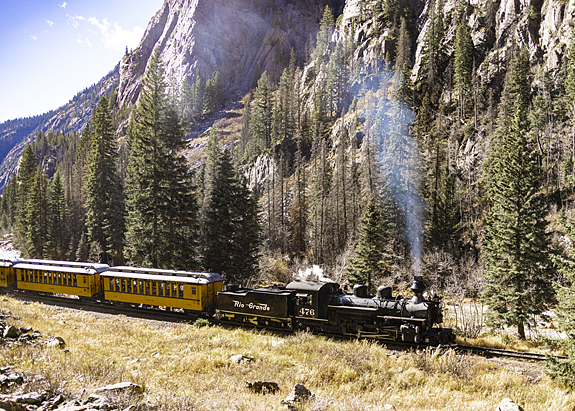 To really capture that “step back in time” look, carefully examine your shot for any modern equipment or objects that will deter from the timelessness of the scene. At the same time, look for rail equipment that you can make a part of your scene – a switch, a signal, a siding or other items that can be used as frames in your scene or to provide leading lines into the subject. Also consider converting some of your images to sepia or black and white to help capture that historic feel of the rails.

These days rail schedules –built around the needs of weekend or summer riders in many cases– dictate when you can shoot a train on the move. But golden hours are still the best if you can find those opportunities. Will the maintenance crew be running the train down to the water tank early in the morning before the passengers arrive? Will trains be shuttling in the yard after sunset? Get to know the people that know the answers to questions like this for better opportunities. 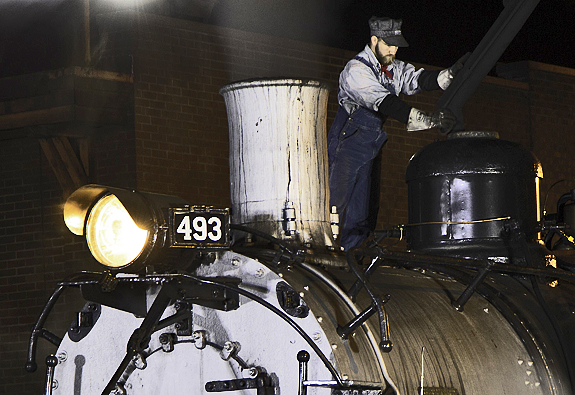 Stationary trains also make good subjects– in some cases. A landscape shot with a sidelined train in profile weighing down the bottom third of your image can be spectacular in the right light. Trains at rest also provide great opportunities for closeups of the valves, pipes, wheels, driving rods and other parts of these complex machines.

Finally, don’t forget the people who make the railroad run. They often dress in period costumes to illustrate the historic aspects of their trains. Crewmembers make these trains go as a labor of love. Firemen and conductors work for years to earn their way to becoming engineers and they can share good stories and insights into the jobs they do and the routes they serve. When their job isn’t otherwise demanding attention, they enjoy having their photos made.

People shots will help you construct a complete story of the steam line and add to the completeness of your photo essays. 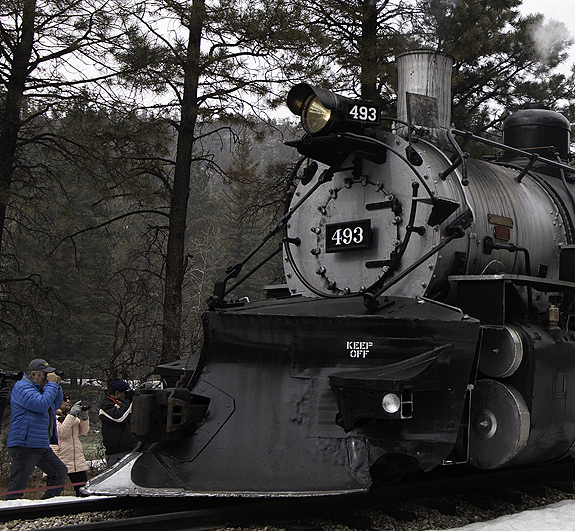 Durango, Colorado is located near the heart of the Four Corners area and at the foot of the San Juan Mountains. The Durango–La Plata County Airport is 12 miles southeast of the city and offers air service from Phoenix, Denver, and Dallas-Fort Worth airports. The closest international airport is Albuquerque’s Sunport, which gets you within a four-hour drive of Durango.

A popular tourist destination, Durango has a variety of lodging and dining options, but can be quite crowded during the summer months, so plan ahead. Several nearby camping options are also available and nearby communities include Cortez, Colorado and Farmington, New Mexico.

For the Durango and Silverton Narrow Gauge Railway:

For a history of the narrow gauge, try these:

A popular site for finding vacation type adventures with steam trains is:

For more information on safety and railroad photography:

For links to interesting railfan websites